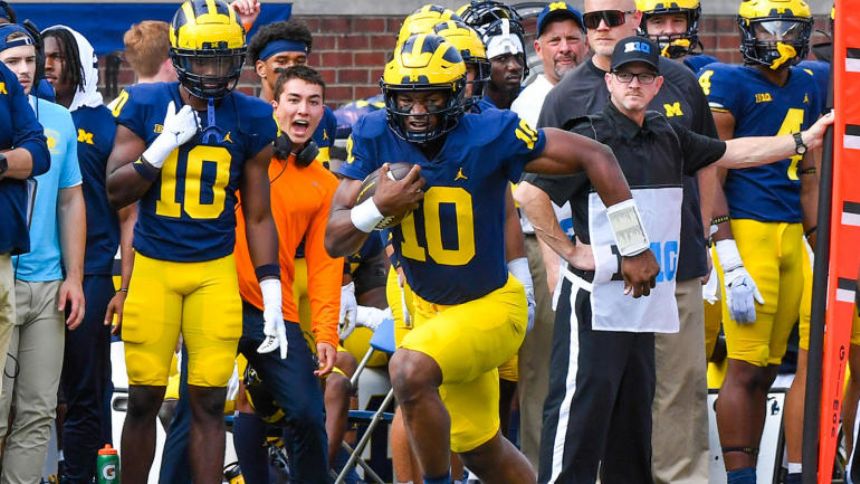 No. 4 Michigan opens its Big Ten title defense by hosting Maryland at noon on Saturday. The Wolverines are fresh off a College Football Playoff appearance and have cruised against Colorado State, Hawaii and UConn by a dominant 166-17 margin. In fact, Michigan has not yet allowed a single first-half point in those games.'

Maryland survived a 34-27 upset bid by SMU last week thanks to 14 unanswered points in the fourth quarter and four straight stops to end the game. SMU ran six plays inside the Maryland red zone, but the Terps managed to keep the Mustangs offense at bay. Quarterback Taulia Tagovailoa threw for 214 yards and two touchdowns in the win, while redshirt freshman running back Roman Hemby added a career-high 151 yards rushing and a touchdown.'

The Terrapins only have one win over the Wolverines in program history, with the lone victory marking the end of the Brady Hoke era at Michigan. Last season, Michigan obliterated Maryland 59-18 behind third-quarter touchdowns on the ground, through the air, from a pick six and on a kickoff return. Because of the pandemic season in 2020, this is Maryland's first trip to Michigan Stadium since 2018.'

Michigan vs. Maryland: Need to know

McCarthy's show:'Michigan coach Jim Harbaugh came into the season with an open quarterback competition. Instead of deciding things in camp, Harbaugh opted to start incumbent Cade McNamara and underclassman J.J. McCarthy in successive games so they could battle it out. McCarthy won the job and threw for 214 yards on 18 pass attempts in an easy win over UConn. However, McCarthy now heads into his first career start against a Power Five opponent. McCarthy completed all five passes for 58 yards and a touchdown in relief against Maryland last year, but starting is a different dynamic.'

Dynamic passing:'Tagovailoa came into the year as one of the most undervalued passers in the country. Through three games, the junior has already showed improvement. Tagovailoa is completing 77.3% of his passes with 10.2 yards per attempt early in the season. Rakim Jarrett, Jeshaun Jones, Jacob Copeland and Dontay Demus make up one of the deepest receiver rooms in the country and pose a real challenge for Michigan's secondary.'

A new-look defense:'Michigan had one of the best defenses in college football last season, and the momentum has continued into 2022. However, the Wolverines' top six players in defensive snaps played so far were not full-time starters in 2021. Only one returning Michigan defender -- Taylor Upshaw -- had more than one sack in 2021. The unblockable pass rush of Aidan Hutchinson and David Ojabo was fundamental to how Michigan played defense last season, so Saturday will be a good measuring stick to see the Wolverines go against a beatable Maryland line to see where the defense sits.'

How to watch Michigan vs. Maryland live

The Terrapins will present a far deeper challenge to Michigan than any previous opponent, especially downfield with their aggressive passing attack. However, the Wolverines have been absolutely cleaning up against bad competition through their first three games. Many have waited for Michigan to make the change to McCarthy under center, so don't be surprised to see the Wolverines also take a few more shots than usual. It might be a backdoor cover, but will be a cover nonetheless.'Prediction: Michigan -17