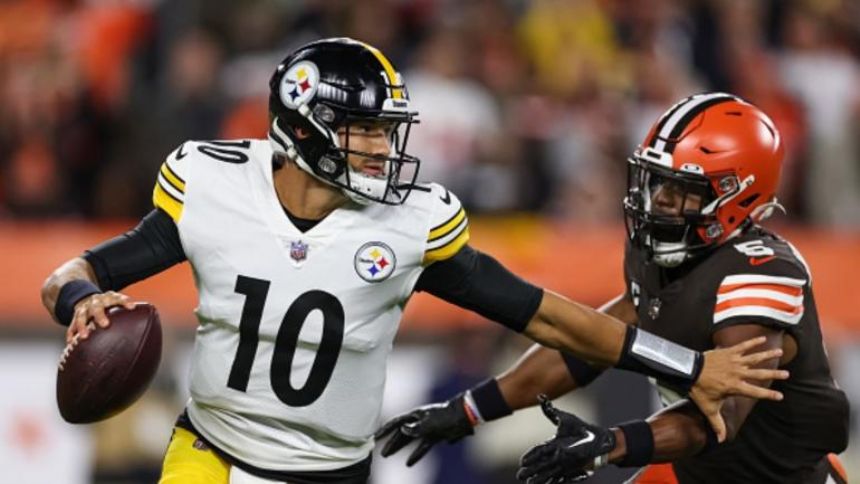 After 30 minutes of play on Thursday night, it appeared that Mitch Trubisky was on his way to silencing everyone who has been clamoring for Kenny Pickett to succeed him as the'Steelers' starting quarterback. But after a lackluster second half for Pittsburgh's offense, the question as to whom should be the starter lives on.'

Following the 29-17 loss to the Browns, Pittsburgh coach Mike Tomlin was asked if he would consider making any significant changes over the following days, including at the quarterback position.'

"I'm not in that mindset," Tomlin said. "I'm interested in reviewing this tape and looking at the totality of it and figuring out how we collectively get better. So, the answer to that question is definitively no."

While it didn't result in a win, Trubisky had his best performance to date as Steelers quarterback. He topped 200 passing yards for the first time (officially throwing for 207 yards on 20 of 32 passing) while scoring a touchdown on the ground to help give the Steelers a 14-13 halftime lead.'

Trubisky, after being criticized for his conservative play in last Sunday's loss to the Patriots, threw significantly more downfield shots on Thursday that included his 32-yard completion to rookie George Pickens in the first half.

Trubisky led the Steelers on a promising drive to start the second half. The drive stalled, however, when running back Jaylen Warren's 35-yard catch-and-run was waived off after offensive tackle Chukwuma Okorafor was called for being illegally downfield on the play. The Steelers punted on that drive and would proceed to punt on their next three drives. They were able to put together a late scoring drive before ultimately running out of time.

"I thought he made some plays, but we all collectively came up short," Tomlin said when asked to assess his quarterback's performance. "That's how we measure performance. Winning is our business, and we didn't handle business."'

Trubisky has essentially been the Steelers' starting quarterback since he signed with them during the first day of free agency. The five-year veteran kept his starting job going into the regular season despite a strong training camp and preseason from Pickett, the only quarterback selected in the first two rounds of April's draft. Pickett, who was able to supplant Mason Rudolph as the Steelers' No. 2 quarterback, spent the Steelers' first three games on the sideline after taking part in pregame warmups.'

While it wasn't good enough to get the win, it's clear that Trubisky's performance on Thursday night has bought him more time as the Steelers' starting quarterback. And, based on how the quarterback situation has been managed so far, it would likely take something significant before a change is made.'

It's certainly safe to assume that Trubisky will make his second home start of the season next Sunday, when Pittsburgh hosts the Jets in a game that is looking more like a must win for the black and gold.'