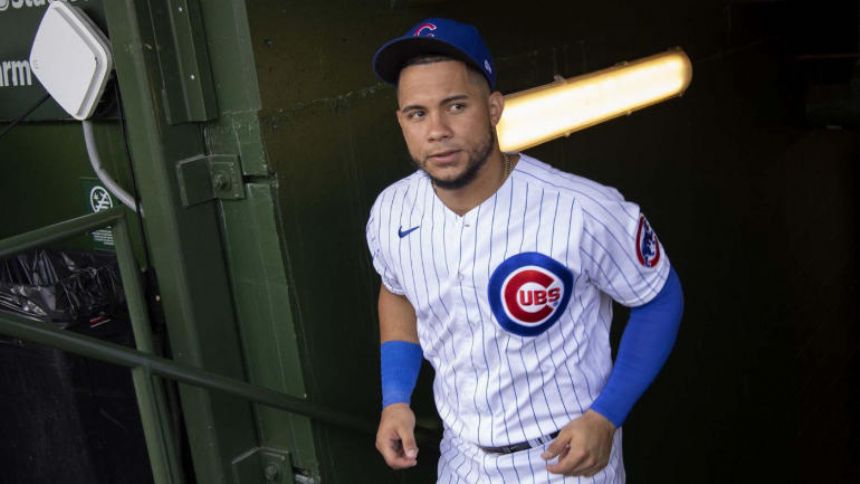 The trade deadline is four days away and late Friday night the biggest pitching chip fell as the . The trade likely takes Seattle out of the running for Nationals wunderkind Juan Soto, . With that in mind, here are Saturday's trade deadline rumors.

Padres in talks for Contreras

The Padres are in talks with the Cubs about catcher Willson Contreras, reports ESPN. Contreras will become a free agent after the season and is all but certain to be traded prior to Tuesday's trade deadline. San Diego's catchers are hitting .258/.311/.366 this season, which is better than the .225/.294/.364 positional average, though Contreras would still be a significant upgrade.

Coming into Saturday'the Padres had a 2.5-game lead for a wild-card spot, though they've lost 21 of their last 36 games, and the offense has really struggled at times. The Padres could use offensive help at multiple positions, most notably the outfield. The bullpen could use reinforcement as well with Taylor Rogers recently being removed from the closer's role.

Phillies get Sosa from Cardinals

The Phillies acquired infielder Edmundo Sosa from the Cardinals for lefty bullpen prospect JoJo Romero, the team announced Saturday. Sosa finished last season as the Cardinals' starting shortstop, though he's fallen into a utility role this year and has struggled. St. Louis is deep in infielders, so they swapped Sosa for an interesting bullpen piece.

As for Philadelphia, their shortstop and second base production has left a lot to be desired this year, though Jean Segura is expected to return from his broken finger next week. The 25-year-old Romero has allowed 21 runs in 21 2/3 career big league innings, though his mid-90s fastball and hard changeup give him a chance to be a bat-misser long-term.

The Blue Jays are among the teams with interest in Tigers righty Michael Fulmer, reports MLB.com. Fulmer threw a scoreless eighth inning in Toronto on Friday. The Tigers have several relievers to peddle at the deadline -- Andrew Chafin and All-Star Gregory Soto are among them -- though Fulmer is an impending free agent, so there is some urgency to move him.

Pitching is the top priority for a Blue Jays team that has been on a tear offensively the last few weeks. Fulmer has morphed into a slider machine who misses bats, though he's also run into walk trouble. He is the kind of rental reliever who moves at the deadline every year and is an upgrade to every contender's bullpen.'

With Castillo off the board, Athletics righty Frankie Montas is now the No. 1 target for the Yankees, reports USA Today. Everything must go in Oakland and Montas is the team's top remaining trade chip. The right-hander missed two starts with a minor shoulder issue earlier this month, but he's looked strong in his two starts back, and he's pitched at a high level for several years now.

New York is seeking a rotation upgrade and will presumably have to win a bidding war to acquire Montas. Several other contenders need rotation help and Montas is appealing because he will remain under team control next season as an arbitration-eligible player. He is not a rental, and as the Castillo trade showed, the price for two postseason runs of an impact starter is high.

The Athletics and Brewers have discussed outfielder Ramon Laureano, according to the New York Post. Laureano is one of the A's top remaining trade chips and he will remain under team control through 2025, so he's a long-term addition. Center field has been a weakness for the Brewers all season and Laureano represents an upgrade over the Jonathan Davis/Tyrone Taylor platoon.

Currently in first place in the NL Central, Milwaukee could use another bat to lengthen the lineup and Laureano brings a speed element as well. His defense tends to be overrated -- Laureano's arm is top of the line, though his range and routes are just OK -- but Brewers center fielders have hit .213/.272/.313 this year, and that's not going to fly when you're battling for a division title.

Rather than trade him at the deadline, worth about $19 million. The 37-year-old Bard will be a free agent after the season and was a top trade candidate. Bard, the 2020 NL Comeback Player of the Year, remains a top bat-misser and ground-ball-getter. The Rockies kept Trevor Story and Jon Gray at the deadline last year but could not re-sign them as free agents. This time they were smart enough to extend Bard before he hit the market.

. Utility man Zach McKinstry went to the Cubs in the one-for-one trade. Martin adds depth to a bullpen that is without Blake Treinen (shoulder inflammation) and Daniel Hudson (torn ACL), among others. The Cubs get a versatile bench piece with some pop in McKinstry.

. Minor league catcher Christian Cerda goes to Arizona in the one-for-one trade. Tampa is in the bottom third of the league in runs per game and Peralta gives them a much-needed power bat, though the lefty swinger does need a platoon partner. He'll give the Rays a boost as they wait for Wander Franco, Manuel Margot, Harold Ramirez, and others to return from the injured list.