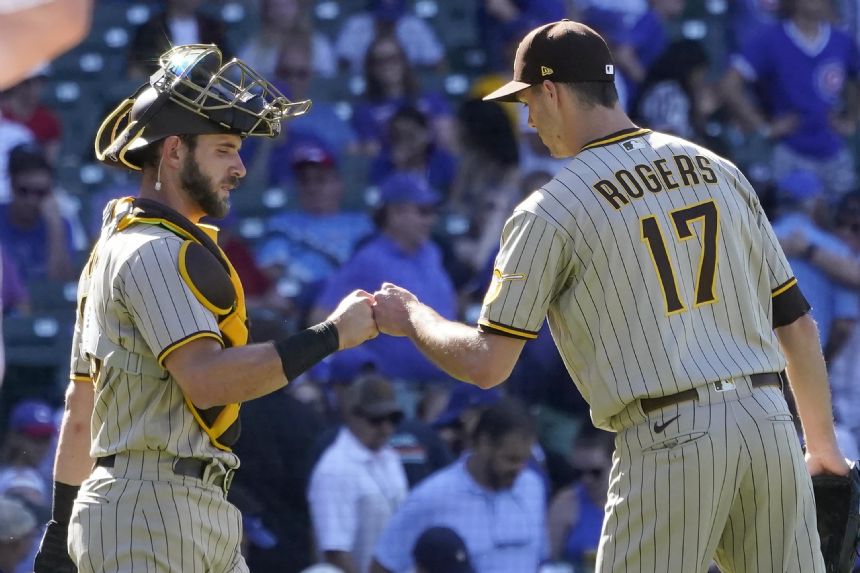 Musgrove (8-0) permitted two runs and five hits. The 6-foot-5 right-hander struck out a season-high nine and walked one.

San Diego improved to 7-2 in its last nine games with its first four-game series sweep of Chicago since Aug. 16-19, 2010, at Wrigley Field.

The Cubs have been outscored 90-28 during their longest slide since they lost 12 consecutive games from Aug. 5-16.

Cubs rookie Christopher Morel led off the first with his second homer in as many games, but Matt Swarmer (1-2) was knocked out in the fourth.

Nomar Mazara and Jurickson Profar homered for San Diego, and Taylor Rogers earned his 20th save in 23 chances.

DENVER (AP) - Jose Ramirez doubled for his eighth straight game with an extra-base hit, and Cleveland matched a season high with its fourth win in a row.

Ramirez hit an opposite-field grounder that hugged the third-base line against an exaggerated shift in the first inning. He is the first major leaguer with extra-base hits in eight consecutive games since Cincinnati's Joey Votto in 2020.

Cleveland's Amed Rosario extended his hitting streak to 10 games with an RBI single to cap a three-run third inning.

Triston McKenzie (4-5) gave up one run in six innings. Emmanuel Clase worked the ninth for his 14th save.

Brian Serven and Connor Joe each had a career-high four hits for Colorado, which has lost 10 of 14. Chad Kuhl (4-4) gave up two earned runs in five innings.

Austin Hays hit his ninth home run, a solo shot off Matt Gage in the eighth, and Rougned Odor had two hits and two RBIs as Baltimore won for the fourth time in six games.

Facing the team that drafted him for the first time, Gausman (5-6) allowed a season-worst seven runs, five earned, and seven hits in 2 1/3 innings.

Toronto's Teoscar Hernandez homered for the second straight game, a solo shot off Wells in the fourth.

BOSTON (AP) - Paul Blackburn pitched sharply into the sixth inning, Christian Bethancourt hit a two-run single and the Athletics held off the Red Sox for just their second win in 15 games.

Chad Pinder added an RBI single for Oakland, which closed its nine-game road trip at 2-7.

J.D. Martinez had three singles and drove in a run for Boston. The Red Sox, who had won 11 of 13, left eight runners on in the first four innings and 13 overall.