Nantes expresses shock at Nice fans who chanted about Sala 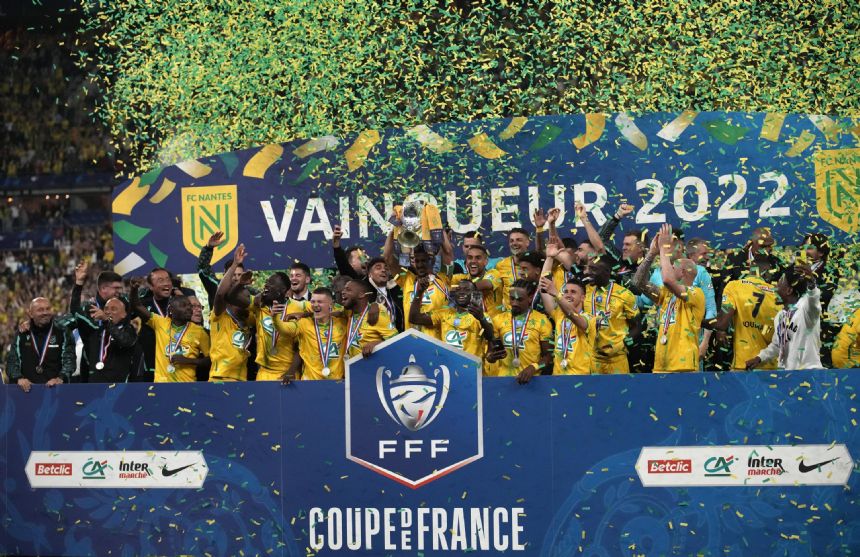 PARIS (AP) - French soccer club Nantes has expressed its shock at Nice fans who made derogatory chants about Emiliano Sala during a league game on Wednesday.

Sala died after the single-engine Piper Malibu aircraft in which he was traveling crashed in the English Channel on Jan. 21, 2019. He was leaving Nantes, where he was hugely popular with fans, to join Cardiff in the English Premier League.

"Nantes learned with terror about the chants made by certain Nice fans and can only firmly condemn behavior that degrades the memory of Emiliano Sala," Nantes said in a statement Thursday.

Nantes retired the No. 9 as a tribute to Sala, who scored 48 goals in 133 appearances for the club.

Nantes coach Antoine Kombouare also condemned those Nice fans who made mocking chants about him.

"Human stupidity has no limit. I'm outraged, these people have no place in a stadium," he said after French Cup winner Nantes had beaten Rennes 2-1 at home. "They should be banned, it's a disgrace. I feel for his family."

Nantes also thanked Nice coach Christophe Galtier, who expressed his outrage at the fans who chanted during the home game against Saint-Etienne.

"I have no adjectives to describe what I heard," he said, apologizing in the name of the club. "We would like to offer our apologies to the family of Emiliano Sala and Nantes."

He said the fans in the Nice Kop who made those chants are not welcome back.

"We shouldn't be hearing that in a stadium. If they're coming to insult the dead, then they should stay home," Galtier said. "People sometimes say that what we see inside a stadium is a reflection of society. If that's our society then it's really (expletive)."

The incident came a few days after Nice lost 1-0 to Nantes in the French Cup final at Stade de France on Saturday.