NFL Week 2 grades: Browns get a 'D' for choke job against Jets, Dolphins get an 'A' for stunning comeback win 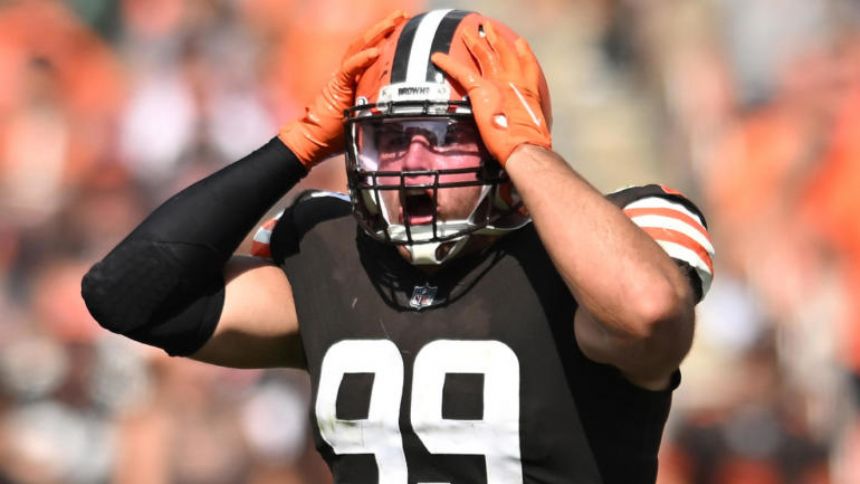 There's a reason that Cleveland is once known as the 'Factory of Sadness.' The Browns arguably have more improbable losses than any other team in NFL history and they added another one to their heartbreaking total on Sunday by blowing a 30-17 lead to the New York Jets in just 85 seconds.'

With 1:55 left to play on Sunday, Nick Chubb scored a touchdown to put the Browns up 30-17 and it looked like Cleveland was going to coast to victory, but when you're talking about the Browns, there's no such thing as coasting to victory.'

In a stunning turn of events, the Jets scored two touchdowns just 60 seconds apart, which allowed them to steal a 31-30 win. If you're wondering how improbable the loss was, here's your answer.'

NFL teams had won the last 2,229 consecutive games when leading by at least 13 points in the final 2 minutes.

The last team to blow such a lead? The Browns in week 9 of the 2001 season vs the Bears. pic.twitter.com/x0PfP27auh

For the most part, the Browns played an impressive game, but they couldn't overcome SIX monumental mistakes, which all took place over the final two minutes.'

The biggest one came from Chubb, who could have sealed the win if he had simply fallen to the ground instead of scoring a TD with 1:55 left. If he had done that, the game would have been over because the run gave Cleveland a first down and the Jets had zero timeouts remaining.

Nick Chubb decided to run this in for a TD rather than slide down.

We've seen running backs go down at the 1-yard line before, but Chubb didn't do it here. Even if he had gone out of bounds, the Browns still could have simply kneeled the ball three straight times to pick up the win. '

Chubb's gaffe wasn't the only big mistake the Browns made. Last week's hero for the Browns, Cade York, definitely wasn't the hero this week. The Browns would have had 31 points at the end of the game, but York missed the extra point following Chubb's touchdown. The missed kick left the Browns in front by just 13 points, which helped open the door for the Jets comeback. ''

The mistakes by York and Chubb wouldn't have mattered if the Browns defense didn't give up a long touchdown, which brings us to mistake number three: The Browns somehow left Corey Davis wide open for a 66-yard touchdown.'

It's not over! The Jets recover the onside kick!!!

Nine plays after the recovery, the Jets would score the go-ahead touchdown with a 15-yard pass from Flacco to Garrett Wilson (Giving up the TD was mistake number five).'

Even after falling behind, the Browns STILL had a chance to win. With six seconds left, the Browns were at their own 46 and they need roughly eight to 10 yards to give York a realistic shot of making a field goal. However, York never got a chance to win the game because Jacoby Brissett threw an interception for mistake number six.'

It was a total of meltdown in a game that the Browns had no business losing. Their 'F-' performance over the final two minutes completely overshadowed the fact that they actually played pretty good football for the better part of three quarters.'

Alright, let's get to the grades for every game from Week 2. If you're looking for a deeper dive on the Chiefs' wild 27-24 win over the Chargers that was played on Thursday, be sure to click here. '

Colts-Jaguars grades by John Breech (Love the grades? Hate the grades?'Let him know on Twitter.)

Commanders-Lions grades by John Breech (Love the grades? Hate the grades?'Let him know on Twitter.)

Dolphins-Ravens grades by Jeff Kerr (Love the grades? Hate the grades?'Let him know on Twitter.)

Patriots-Steelers grades by Bryan DeArdo (Love the grades? Hate the grades?'Let him know on Twitter.)

Buccaneers-Saints grades by Tyler Sullivan (Love the grades? Hate the grades?'Let him know on Twitter.)