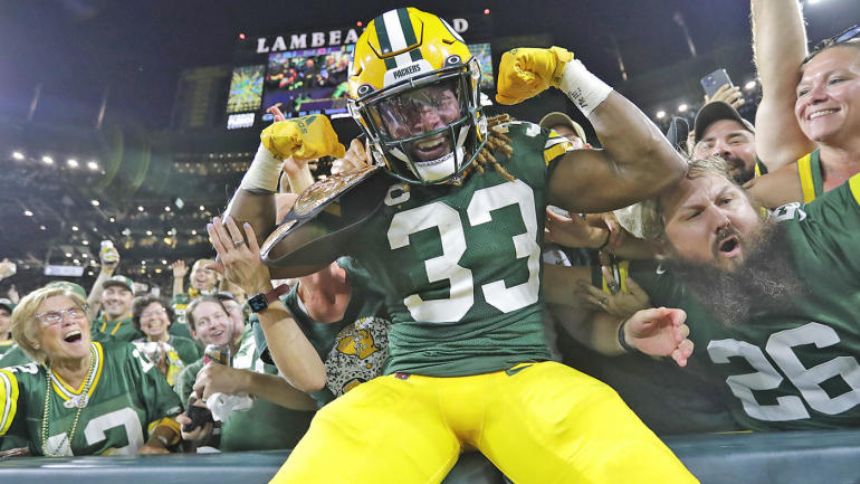 Another week of football is officially in the books. The Dolphins outdid the Ravens in a shootout under the sun. The Jets stunned the Browns in a comeback in Cleveland. The 49ers welcomed back Jimmy Garoppolo while rolling over the Seahawks. If Week 1 was an explosive reintroduction to the NFL, then Week 2 was a reintroduction to the league's absurd parity.

Get yourself fully caught up with the'NFL Morning Scramble, our weekly rundown of top takeaways and tidbits from the latest slate of games. Like the best greasy breakfast plates at your local diner, this is meant to be a hodgepodge of the good stuff -- from weekly MVPs and true-or-false narratives to a look ahead at next weekend's best games and hot-seat candidates.

Now dig in, and let's recap:

Tua Tagovailoa deserves plenty of props for throwing six (!) TDs to storm back and beat the Ravens, whose own QB deserves consideration here, but so much of the Dolphins signal-caller's breakout is due to Hill's effortlessly freakish speed out wide. Even when the deep balls are underthrown, he's athletic enough to score anyway. His 190 yards and two scores legitimately made Baltimore's secondary look like a junior varsity squad.

Call them the prime-time darlings, because they lit up Sunday and Monday night. Hurts (390 total yards, 3 TDs) was darn near perfect under the lights, picking apart the Vikings'defense with ease, then bulldozing through it with his legs to help guide a 24-7 rout that was even more lopsided than the score suggests. In Green Bay, meanwhile, what do you do when you have zero reliable downfield weapons for Aaron Rodgers? Feed your star running back! That's what Matt LaFleur did in the Packers' 27-10 win over the Bears, and it helped give new, steady life to the offense. Active as both a traditional runner and short-area chess piece, Jones racked up 170 total yards and two scores to headline the win.

Up against old friend Frank Reich in Jacksonville, Pederson unveiled the most confident edition of Trevor Lawrence yet, bolstering his remade offense with fourth-down aggressiveness and watching as his coordinator, Mike Caldwell, turned a young pass rush loose on Matt Ryan, securing a 24-0 rout of the rival Colts. The tides are turning on the Jags.

Yes, believe it or not, in the year 2022, the 37-year-old Flacco can still throw a clutch ball. Written off as the dusty replacement for Zach Wilson on another bad Jets team, Joe looked at a 13-point deficit with two minutes left and laughed. The Browns' blown coverage helped, but the grizzled QB had perfect touch on TD throws to Corey Davis and Garrett Wilson to seal a 31-30 upset.

Teams of the Week

The AP Fantasy team has you covered with the latest waiver recommendations, Week 3 projections and much more. In the meantime, here are the guys I'd be eyeing if I were you:

Which developing narratives -- popular or artificial -- are actually valid?

The Bears don't trust Justin Fields: It took until the final two minutes of their Sunday night loss to the Packers for Chicago to dial up Fields' 10th pass attempt of the game. Sure, David Montgomery was running well, but trailing by multiple scores, you'd think they might want to use their young QB's arm, especially after a similarly timid Week 1? Verdict: TRUE

The Broncos are back on track: After a lousy debut in Seattle, Denver got a "W" against the Texans thanks to a late Russell Wilson TD pass. But Russ was even worse this time around; Nathaniel Hackett's offense looked rickety as No. 3 tried too hard to create plays. This team that leans on the run and defense.'Verdict: FALSE

Jimmy Garoppolo is ready to lead the 49ers: Go figure that, weeks after his unexpected return on a revised contract, Garoppolo is back in the saddle following Trey Lance's unfortunate season-ending ankle injury against Seattle. No one is better equipped to run Kyle Shanahan's system, even if "leading" the team means a wild-card-ish ceiling.'Verdict: TRUE

On the Horizon: Week 3

Game of the Week: Packers at Buccaneers

The AFC East is gifting us our first Bills-Dolphins showdown (a real chance for Tua to once again show out against a superior talent at QB), but whenever Tom Brady and Aaron Rodgers are on the field at the same time, that's must-see TV. The last time these two teams met, Brady and Co. bested A-Rod in the NFC Championship en route to a Super Bowl championship.

He's not blocking for Joe Burrow right now (no one is!), but he's part of the leadership team that's saddled the Bengals' star QB with shoddy protection and questionable play calls. Taylor is now 0-3 since the Bengals' magical Super Bowl appearance, including the big game, and his strategy for unlocking Burrow's downfield weapons hasn't exactly clicked during back-to-back losses to the Steelers and Cowboys, neither of which entered their respective matchups with Cincinnati as world-beaters. Imagine if they slip up against Joe Flacco and the Jets in Week 3.