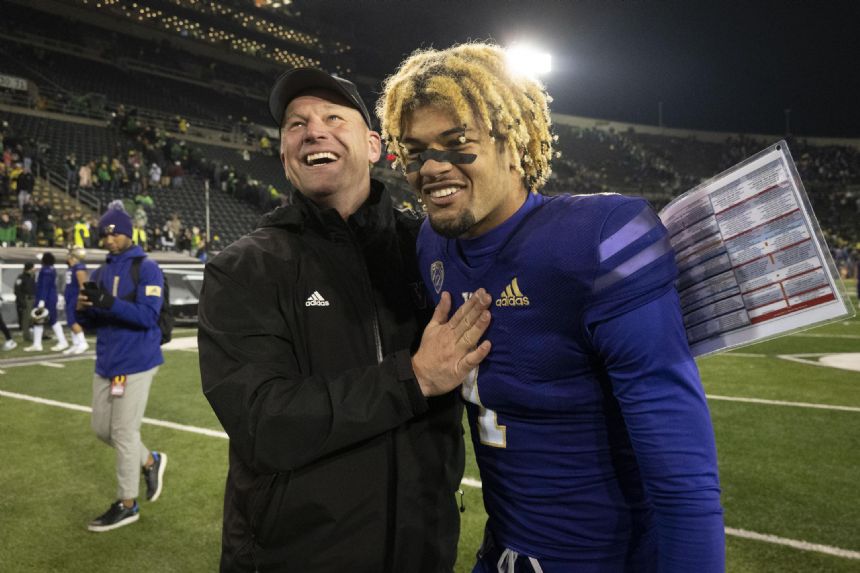 SEATTLE (AP) - From the time he took the head coaching job at Washington, Kalen DeBoer was made aware of the importance of getting the best of his neighbors in Oregon.

Now that he's done it in his first season in charge, what comes next? How about keeping alive the hopes of getting a spot in the Pac-12 championship game?

Coming off last week's road upset of Oregon, the 15th-ranked Huskies play their home finale Saturday against listless Colorado. Washington (8-2, 5-2 Pac-12, No. 17 CFP) still has an outside chance of earning its way to Las Vegas for the conference title game, but will need some help to get there. First, the Huskies must avoid a letdown against the Buffaloes and then get the better of Washington State next week in the Apple Cup.

"We're becoming a pretty complete team and each and every week we're closing the gap on what our potential is. We said all along that everyone can beat us, too," DeBoer said. "A few weeks back, we went on a two-game losing streak and we're going to learn from those games just like we have the wins as well. We've got to be ready. We've got a lot riding on the season as far as the opportunities that could present themselves. Before we think about the last week of the season, we've got to make sure we're focused on Colorado."

The challenge is clear. The Huskies just won on the home field of their most-hated rival and a week from now face in-state rival Washington State on its home field in Pullman.

It's a perfect recipe for a slump. In which case, Colorado (1-9, 1-6) might be the perfect opponent. The Buffaloes have lost four straight, given up at least 40 points in each of those setbacks and are now tasked with trying to slow down the nation's leading passer, Michael Penix Jr. coming off his magical night against Oregon.

"From basically the first snap it was like Washington's better than Oregon on the field that day," Colorado interim coach Mike Sanford said. "It's a monumental task for our football team to go in there. And we're excited for that task."

Penix might not have a better moment in college than his performance against Oregon. His 408 yards passing and two touchdowns against the Ducks included a flurry of highlight moments. Penix moved into second place on Washington's all-time single-season passing list and could inch closer to breaking a record that seemed untouchable with a big game against Colorado.

Colorado senior running back Alex Fontenot's game last week against USC was a bright spot in what's otherwise been a miserable season for the Buffs. Fontenot rushed for a season-high 108 yards and a touchdown against the Trojans. It was the fourth 100-yard game of Fontenot's career, but his first since Nov. 23, 2019, when he rushed for 105 yards in a win over Washington.

Fontenot has seen a lot in his time in Boulder. He arrived on campus in 2017 and showed flashes of being a breakout star in 2019 before an injury cost him the entire 2020 season.

"At this point I can't get down on myself every game. I would just drive myself into a wall doing that," Fontenot said. "I'm out here just enjoying the time that I have, to do what I love with all my brothers, because I know I probably won't ever get that time back."

Washington will honor 13 seniors before kickoff - 11 scholarship players and two walk-ons - DeBoer said. It's been a difficult tenure for some of them, including three head coaches, a truncated season due to the pandemic and a brutal 4-8 campaign.

"We've leaned on them so much over the last 12 months now to give me guidance when I have questions about how things have been done in the past. Or how we're doing with our attitude and the little things and areas I can clean up for the team that maybe not where we want them in sync," DeBoer said. "They've been open, honest. They've been great."