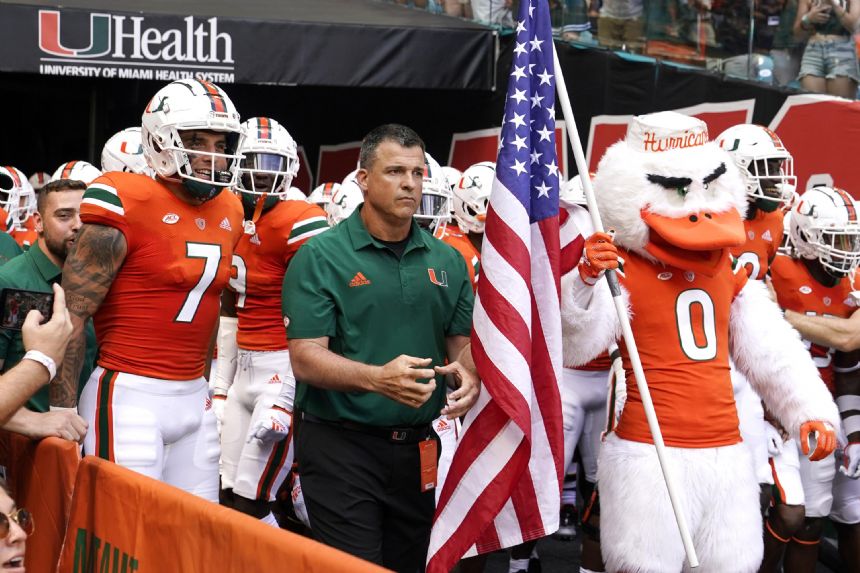 Gilbert Frierson had an interception return for a score, while Xavier Restrepo and Michael Redding III caught the TD passes from Van Dyke - who completed 13 of 16 passes for 193 yards. Jake Garcia completed all eight of his passes for the Hurricanes.

It was Cristobal's 12th season-opener at Miami - he had five as a player, including his redshirt year, then three as a graduate assistant and three more as a full-fledged assistant.

But this was the first, of what Miami expects to be many, with him in charge of the operation.

There was much to like: Van Dyke's passes were crisp, Parrish stepped up to lead an injury-depleted running back corps, Frierson had the return touchdown, Key'Shawn Smith had three kickoff returns for 184 yards - barely stepping out 17 yards from the end zone on what would have been a return score - and the Hurricanes blocked a field goal.

There also were things that will jump off the film and needs to be corrected, such as Bethune-Cookman getting seven plays of at least 20 yards, two of those being passes that wound up going for gains of 44 and 48.

Bethune-Cookman: All six games have ended up as easy Miami wins - average margin 42 points - but the Wildcats can feel good about this. They scored first in four of those six matchups, the latest entry on that list coming when they converted a third-and-23 on Saturday's opening drive on the way to a field goal.

Miami: There were clearly not 56,795 people in the stands Saturday - Hard Rock Stadium holds about 65,000 for football - but that was the announced number of tickets distributed. It was the fourth-highest attendance figure for a Miami home opener since the Hurricanes moved into the Miami Dolphins' stadium 15 years ago.

Miami should remain ranked and probably won't deviate far from the current No. 16 spot. It'll be the 159th time (out of a possible 183) that the poll will include Miami during Cristobal's years with the Hurricanes as a player, graduate assistant, assistant coach and now head coach.

Miami improved to 65-32-1 all-time in openers, starting with the 1926 season when the Hurricanes fielded only a freshman team. But it's only the second time in the last five years that Miami has started 1-0, after losses to LSU in 2018, Florida in 2019 and Alabama last year. The Hurricanes opened 2020 with a win over UAB.

Miami: Host Southern Miss on Sept. 10, the first meeting between the schools. The Hurricanes will be seeking what would be just their seventh 2-0 start in the last 18 seasons.