No. 4 Alabama beats No. 1 Georgia in SEC championship game 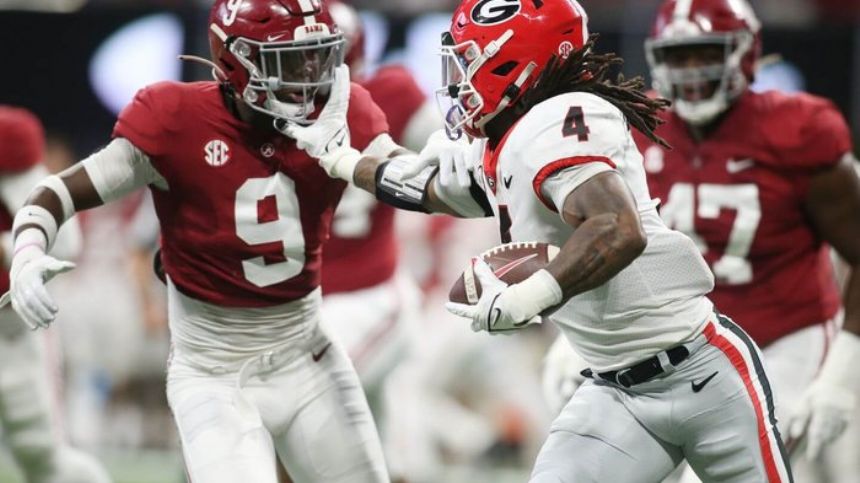 ATLANTA (AP) - Bryce Young threw for three touchdowns and ran for another as fourth-ranked Alabama rolled over No. 1 Georgia 41-24 in the Southeastern Conference championship game Saturday, a result that likely sends both powerhouse programs to the four-team College Football Playoff.

Georgia (12-1, No. 1 CFP) cruised through the regular season, barely challenged and a unanimous choice as the nation's No. 1 team for the past two months. The Bulldogs boasted a fearsome defensive unit that had allowed only 6.9 points a game.

Young made them look like a scout team, surely bolstering his Heisman Trophy chances as well as moving on to an even bigger game on the final day of 2021.

The playoff field will be announced Sunday, with the semifinals set for the Orange and Cotton bowls on Dec. 31.

Alabama (12-1, No. 3 CFP) had six offensive scoring drives - five covering at least 75 yards, the other 62 - and finished with a staggering 536 yards against a team that was giving up just under 231 per game.

The Tide's defense wasn't too shabby, either, essentially sealing the victory with Jordan Battle's 42-yard interception return to the end zone with about 12 minutes remaining.

Georgia's Stetson Bennett threw for 340 yards and three touchdowns, but he also had two crucial picks. Freshman Brock Bowers made 10 catches for 139 yards.

The Bearcats who are ranked No. 4 in the latest College Football Playoff rankings, are in position to become the first non-Power 5 team to qualify. The final rankings will be announced Sunday.

Ridder completed 11 of 17 passes for 190 yards for Cincinnati (12-0), which extended the nation's second-longest home winning streak to 27, and scored three touchdowns in fewer than eight minutes to finish off its second straight AAC crown.

Cougars junior QB Clayton Tune passed for 250 yards with two touchdowns and an interception as Houston (11-2) lost for the first time since dropping its season-opener to Texas Tech on Sept. 4.

ARLINGTON, Texas (AP) - Dezmon Jackson came up inches short on a desperate, fourth-down dive with 24 seconds remaining and Oklahoma State fell to Baylor in the Big 12 championship game and knocked the Cowboys out of contention for a playoff spot.

The Cowboys (11-2, CFP No. 5) rallied back, then went 89 yards on 17 plays on their final drive. But their Big 12 and national championship hopes wound up just shy.

Sanders threw four interceptions, one by Jairon McVea, and the Cowboys were without leading rusher Jaylen Warren because of his lingering ankle and shoulder issues.

Bonner passed for 318 yards and four TDs, while fellow Arkansas State transfer Bowling had eight catches for a career-high 154 yards. The Aggies (10-3) punctuated their inspiring turnaround under first-year coach Blake Anderson by blowing out the short-handed Aztecs (11-2) for their first win over an AP Top 25 opponent since 2015.

Utah State earned a berth in the inaugural LA Bowl on Dec. 18 at SoFi Stadium. The Aggies are likely to face Oregon State.

Jordon Brookshire passed for 117 yards before getting replaced by Jalen Mayden for San Diego State, which had its four-game winning streak snapped in the school's most lopsided loss since a 35-point defeat at Ohio State in September 2013.

Utah State's 46 points were the most allowed in Aztecs coach Brady Hoke's two stints and four seasons at SDSU.

Emani Baily rushed for 117 yards, highlighted by his 35-yard touchdown run on a third-and-9 play to give the Cajuns a two-touchdown lead early in the fourth quarter.

Lewis passed for 210 yards without a turnover and finished with 43 net yards rushing as Louisiana-Lafayette (12-1, 9-0 Sun Belt) lengthened its school-record winning streak to 12 games.

Cameron Peoples ran for a 43-yard touchdown in the first half for Appalachian State (10-3, 7-2), but the Mountaineers' offense struggled to match its usual production while trying to play catch-up from its first possession. Appalachian State QB Chase Brice completed just 12 of 30 passes for 119 yards and was sacked four times.