Old Pens or Pens of old? Pittsburgh opts to run it back 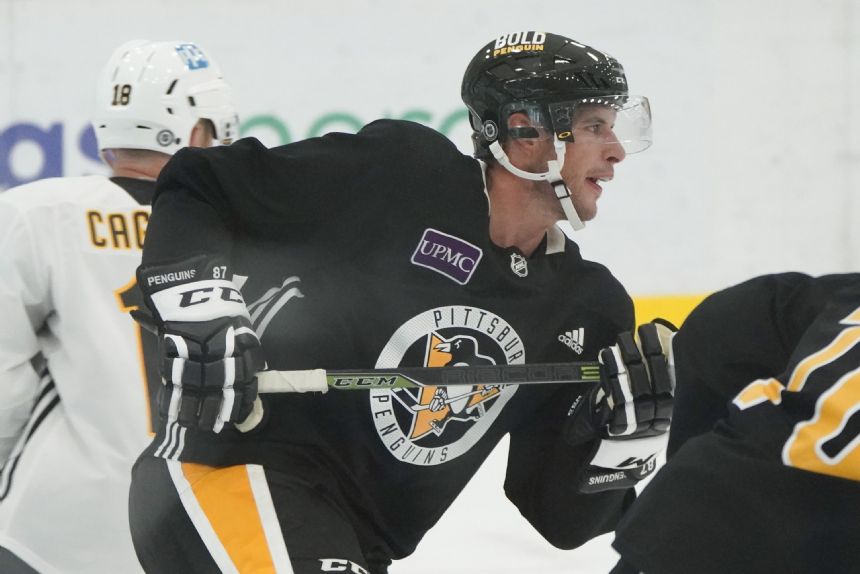 PITTSBURGH (AP) - Sidney Crosby doesn't remember worrying about his age when he was 18. He's not about to do it now that he's nearly double that.

So what if the 35-year-old Pittsburgh Penguins captain has been in the NHL nearly half his life? His legs are fresh. His mind too. Same for Evgeni Malkin (36), Kris Letang (35), Jeff Carter (37) and everyone else on a roster that ranks among the oldest in the league.

Whatever concessions Crosby and company may be making to Father Time, they believe they can make up for in experience and cohesion. There's a lot of ways to play fast in the NHL. Being part of a group so attuned to each other they move as one is just one example.

"I'm sure that the last few teams that have won (the Stanley Cup were) in the upper age categories so it's probably not a fluke," Crosby said on the cusp of his 18th season. "Experience has something to do with it."

Something that won't be a problem for the Penguins after new owners Fenway Sports Group opted to bring back Letang and Malkin on long-term contracts rather than let the longtime franchise fixtures walk in free agency. After a bit of hand wringing - particularly when it came to Malkin - the core that's forged an inseparable bond and raised the Cup three times along the way remains intact.

"They're close friends," coach Mike Sullivan said. " And and the fact that we were able to to keep those guys intact, I'm excited about it and I know they are as well. And I know they're I know they're motivated to to try to win again."

Crosby believes the signings aren't about nostalgia but giving the Penguins the best chance to remain competitive with the league's marquee teams. Pittsburgh believes it had a championship-caliber group last spring only to be undone by injuries to goaltenders Tristan Jarry and Casey DeSmith and an unfortunate bounce or two.

"People saw what we were able to do," Letang said. "So why change everything when when we were, like, that close?"

Not everything is the same. The Penguins opted for a little more heft defensively, bringing in 6-foot-3 defensemen Jeff Petry and Jan Rutta in hopes opponents won't be able to create quite as much havoc in front of Jarry, who is fully healed from the foot injury that limited him to just one playoff start.

Four straight first-round playoff exits have quickly turned the back-to-back Cups the Penguins captured in 2016 and 2017 into a faded memory. Yet they are confident their championship window remains wide open even with half of the opening night roster 30 or older.

The task for Sullivan will be trying to manage workloads over a six-month season. He believes his leaders are bought in to the process. It's one of the reasons they've been able to stick together for so long.

"Everybody takes a look back to try to learn through that experience," he said. "But at this point, where we're going to be a forward thinking group, this is a new season with a new team."

Pittsburgh didn't just focus on keeping Letang and Malkin around. The Penguins re-signed Rickard Rakell - acquired in a trade with Anaheim last season - and veteran Bryan Rust to six-year deals.

Rust is coming off a season in which he posted a career-high 58 points while bouncing between lines, showing a capability to fit in. He also arrived at training camp with a little edge. He's not the only one as the Penguins prep for the season opener at home Oct. 13 against Arizona followed two nights later by a visit from the East champion Tampa Bay Lightning.

"(It's a) new fresh season but I think everybody comes in with a chip on their shoulder, knowing we have better knowing we can do better," he said.

Malkin was limited to just 40 games last season after recovering from knee surgery over the summer in 2021. Negotiations with the Penguins went down to the wire before he ultimately came back on a four-year deal that included a pay cut.

The Russian star was iffy at times during five-on-five play but remained a threat with the man advantage. Now given a full offseason to train, Malkin is intent on proving those who feel his best days are behind him wrong.

"I believe in myself (that) I'm still a good player," said Malkin, who is third in franchise history in goals, points and assists behind Crosby and Hall of Famer Mario Lemieux. "I'm here to win, you know, like I (will) do my best and be ready for that first game."