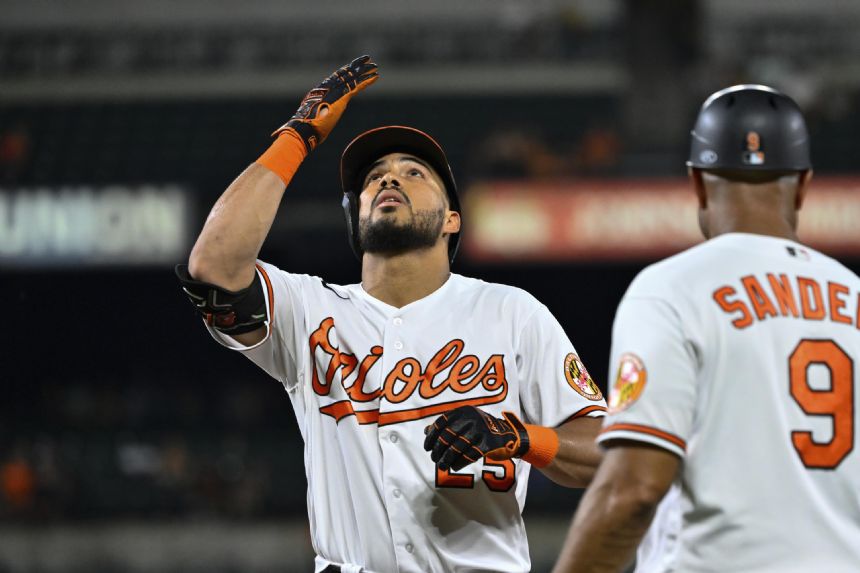 BALTIMORE (AP) - Rougned Odor hit a two-run homer in the bottom of the eighth inning, and the Baltimore Orioles rallied for a 6-5 victory over the Toronto Blue Jays on Tuesday night.

The Orioles trailed 5-3 in the sixth when the game was delayed 78 minutes because of rain. Then Baltimore cut the lead in half on Ryan Mountcastle's RBI double in the seventh. Odor connected off Yimi Garcia (1-4) to give the Orioles the lead an inning later.

Nick Vespi (4-0) struck out his only two hitters in the eighth, preventing the Blue Jays from adding to what was then a one-run lead. Felix Bautista pitched the ninth for his sixth save.

Santiago Espinal hit an infield single off Bautista with one out and went to second on a throwing error by Odor, the second baseman. After Lourdes Gurriel Jr. struck out, Bautista retired Vladimir Guerrero Jr. on a lineout to second.

Bo Bichette hit two home runs for Toronto, including a three-run shot in the sixth. Guerrero extended his hitting streak to 20 games with a sixth-inning single.

The Orioles entered the night trailing Seattle by one game for the final wild card in the American League. The Mariners hosted the New York Yankees on Tuesday night.

Toronto appeared to pull off a triple play in the first inning only to have it overturned by a replay review. The Blue Jays trailed 3-1 before scoring four runs in the sixth.

Bichette also hit a solo shot in the second.

The game was delayed between the top and bottom of the sixth.

The Orioles had some adventures on the bases from the beginning. After their first two hitters reached base, Anthony Santander hit a sinking liner and center fielder Whit Merrifield tried to make a sliding catch. It was ruled a catch initially, although the Baltimore runners didn't seem to think so. They didn't go back to their original bases, giving Toronto an easy triple play.

The call was overturned after a review, leaving the bases loaded with nobody out. Mountcastle immediately grounded into a double play, bringing one run home, and then Terrin Vavra hit an RBI single to make it 2-0.

In the third, the Orioles had men on second and third with one out. This time, the review didn't go their way. Manoah's pitch got past the catcher, although Vavra was ruled to have swung at it. Santander scored easily from third.

However, a replay showed the pitch actually hit Vavra as he swung at it, meaning the runners were put back on second and third and the at-bat continued. Vavra hit a sacrifice fly to make it 3-1, but that was all the Orioles managed that inning.

In the fourth, Odor led off with a single, but when Ramon Urias followed with a single, Odor ended up in a rundown between second and third and was tagged out.

Blue Jays: Merrifield was the last man to bat before the rain delay, and he was replaced afterward. It was not immediately clear why.

Jose Berrios (8-4) takes the mound for the Blue Jays in the series finale against Baltimore's Dean Kremer (4-3) on Wednesday night. The Orioles try for a three-game sweep.