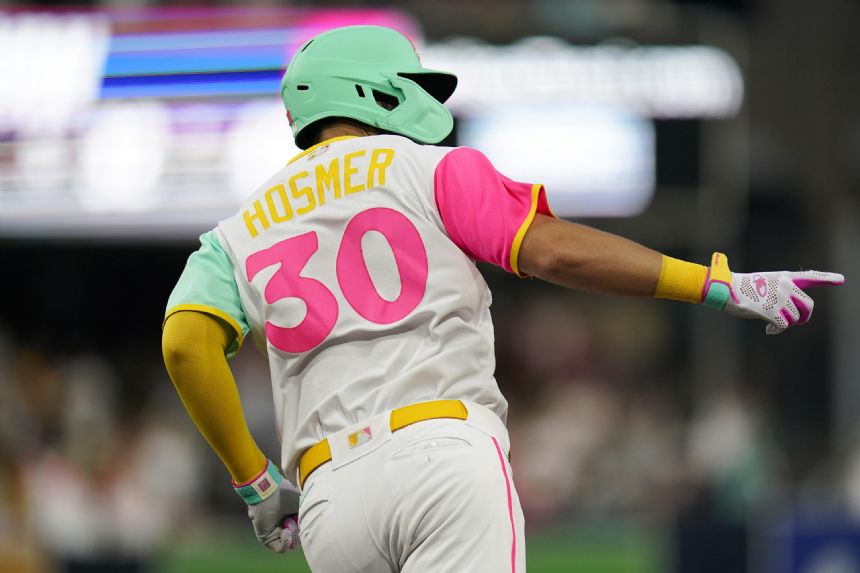 The Boston Red Sox swooped in to grab Eric Hosmer on Tuesday when the San Diego Padres first baseman vetoed a move to the Nationals as part of the blockbuster Juan Soto trade.

The Red Sox obtained Hosmer, a 2016 All-Star with Kansas City, along with two minor leaguers and cash in exchange for minor league left-hander Jay Groome. The addition of the four-time Gold Glove winner, who is batting .272 with eight homers and 40 RBIs, helps fill one of the team's biggest holes so far this season.

Red Sox first basemen - primarily Bobby Dalbec and Franchy Cordero - have batted .224 with 10 homers and 34 RBIs. The team also has 10 errors at first base - tied for most in majors - with Cordero committing three in one game last week.

In all, the Red Sox rank in the bottom five in production at the position in batting average, home runs, RBIs and OPS.

Boston also received a pair of 22-year-olds: Max Ferguson and Corey Rosier, who have been playing this season in Class A.

Ferguson is a left-handed hitter who is batting .221 in Class A this season with six homers, 50 RBIs and 55 stolen bases in 60 attempts. He has played shortstop and second base and some outfield.

Rosier is an outfielder who is hitting .263 with six home runs and 33 stolen bases in Class A.

It was an active couple of days for Boston, which has stumbled badly a year after a surprise trip to the AL Championship Series.

Eleven games over .500 and in position for a playoff berth, the Red Sox won just six of their next 23 games to fall to .500. They entered Tuesday night's game against the Astros in sixth place in the AL wild-card standings, three games behind Tampa Bay and Seattle in the race for the league's sixth and final spot in the postseason.

Chief Baseball Officer Chaim Bloom said last week that he still thought the team could contend for the postseason, and declined to declare the Red Sox sellers at the trade deadline.

But he sent starting catcher Christian Vazquez to the Astros on Monday night for a pair of minor leaguers. And he traded left-handed reliever Jake Diekman to the White Sox for catcher Reese McGuire.

Then the Red Sox obtained left fielder Tommy Pham in a trade with Cincinnati for a player to be named or cash.

Hosmer used the no-trade provision in his contract to block his inclusion in the Padres' deal to acquire Soto from Washington.

As part of the swap, San Diego will send as much as $43.56 million to Boston, offsetting most of the roughly $46 million remaining on Hosmer's $144 million, eight-year contract, which runs through the 2025 season.

Hosmer had a provision allowing him to block trades to 10 teams, including the Nationals, and he has the right to opt out of the contract after this season to become a free agent.

Hosmer helped lead the Royals to the 2015 World Series title; he scored the tying run in the ninth inning of the clinching Game 5 win over the New York Mets.

His arrival in Boston clouds the future of Triston Casas, a 22-year-old who was selected by Boston 26th overall in the 2018 amateur draft. Viewed as a future Red Sox first baseman, Casas is hitting .241 with eight homers and 25 RBIs at Triple-A Worcester after hitting three home runs for the U.S. at last year's Olympic baseball tournament.