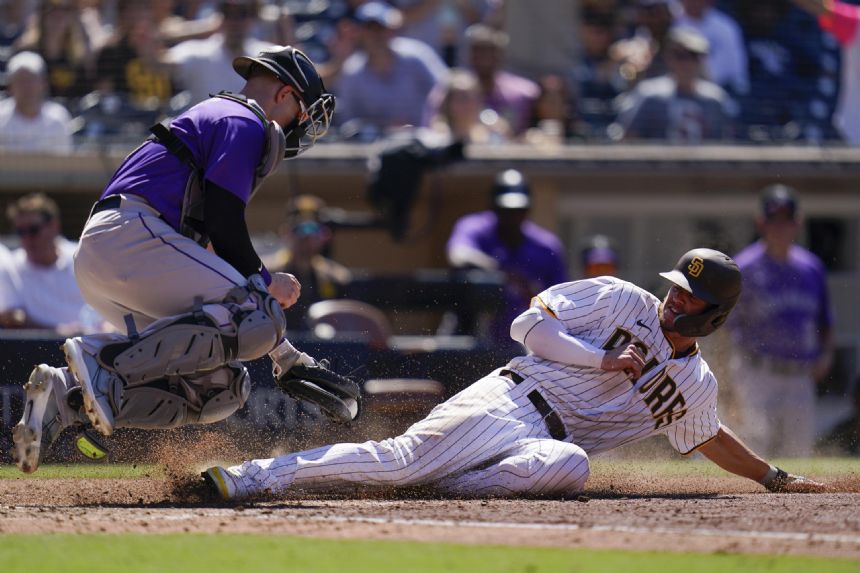 SAN DIEGO (AP) - The San Diego Padres rallied to beat the Colorado Rockies 13-5 in the first game of a doubleheader Tuesday, hours after obtaining superstar Juan Soto of the Washington Nationals in one of the biggest trades in baseball history.

The trade was announced a few minutes before first pitch. The crowd of 23,828 at Petco Park applauded loudly when an image of Soto and Josh Bell, who also came from the Nats, was shown on the video board early in the game.

Yu Darvish (10-4) allowed a two-run home run by Randal Grichuk with no outs in the second and a solo shot by Brendan Rodgers leading off the fourth.

WASHINGTON (AP) - Jacob deGrom dazzled in his first major league start in more than a year, allowing one run on three hits and striking out six in five innings before a bullpen meltdown cost New York against Washington.

Sidelined for the second half of last season by an elbow injury and shut down late in spring training because of a stress reaction in his right scapula, deGrom delivered a 99 mph fastball on his first meaningful pitch since July 7, 2021. He threw 46 of 59 for strikes before coming out of the game.

Francisco Lindor homered for the NL East leaders in the sixth.

Mets reliever Stephen Nogosek (0-1) took the loss after allowing a two-run homer to Luis Garcia and a solo shot to Yadiel Hernandez in the sixth. Yoan Lopez also gave up a homer in the seventh.

ST. PETERSBURG, Fla. (AP) - Kevin Gausman allowed one hit and struck out 10 over eight innings and Toronto opened a nine-game trip with a win over Tampa Bay.

The Blue Jays have won 11 of 13 and increased their lead over Tampa Bay to four games for the top AL wild-card spot.

Gausman (8-8) threw 75 of 103 pitches for strikes. Jordan Romano worked the ninth to get his AL-best 25th save despite allowing Taylor Walls leadoff homer in the ninth.

The Blue Jays were busy before the trade deadline an hour before first pitch. They acquired two-time AL All-Star utilityman Whit Merrifield from Kansas City, and got relievers Anthony Bass and Zach Pop from Miami.

Drew Rasmussen (6-4) gave up one run and six hits over six innings. Tampa Bay is 3-8 since the All-Star break.

Cruz hit a blast to dead center field off reigning NL Cy Young Award winner Corbin Burnes, pulling the Pirates into a 3-all tie. Pittsburgh then added two runs to win for the first time since July 23.

The Brewers had their four-game winning streak snapped, one day after trading All-Star closer Josh Hader to San Diego. Milwaukee had also won seven of eight.

Pittsburgh managed just four hits, but Burnes (8-5) walked five in 5 1/3 innings as his five-game winning streak ended. Burnes was charged with four runs and struck out six to raise his NL-leading total to 166.

Colin Holderman (5-0) pitched one scoreless inning for the win. Wil Crowe pitched a scoreless ninth for his third save.

The 24-year-old Ashcraft (5-2) scattered five hits and struck out three. He was lifted after Jesus Aguilar's one-out double in the ninth. Alexis Diaz relieved and retired the next two batters for his fourth save.

The Reds had only three hits against four Marlins pitchers, but Aristides Aquino's two-run single in the first was enough.

Braxton Garrett (2-5) settled down after the first inning, and matched a career-high with 11 strikeouts in 5 2/3 innings. The left-hander allowed three hits, walked two and hit a batter.

Carson Kelly hit a solo homer, had three hits and scored two runs for Arizona, which never trailed in winning at Progressive Field for the first time since Aug. 13, 2014.

Right-hander Triston McKenzie (7-8) surrendered Walker's three-run drive in the first and lost his second straight start. He struck out seven over six innings and gave up five runs, four earned.