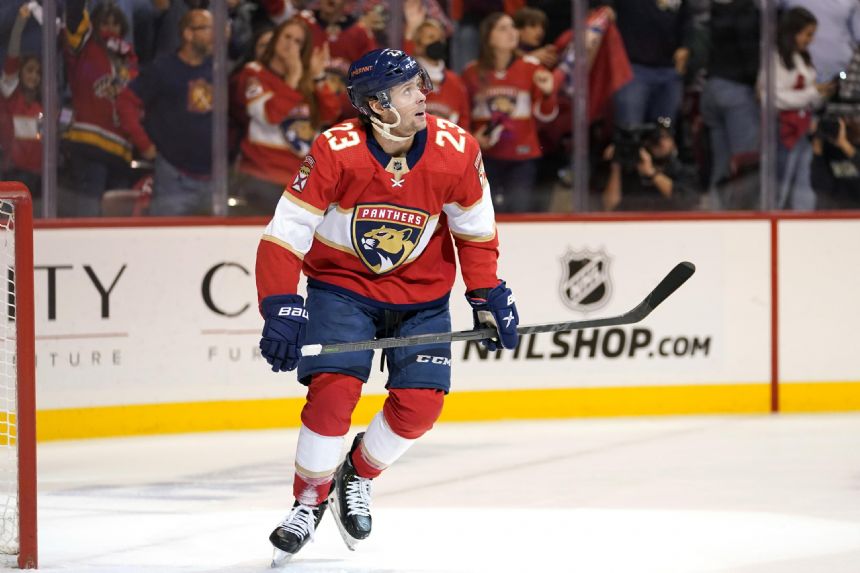 SUNRISE, Fla. (AP) - Carter Verhaeghe set a Florida postseason record with a five-point night, and the Florida Panthers escaped a three-goal deficit to beat the Washington Capitals 5-3 and take a 3-2 lead in an Eastern Conference first-round series Wednesday night.

Sergei Bobrovsky stopped 28 shots for Florida, which trailed 3-0 in the second period. Verhaeghe had two goals and three assists for the Panthers.

Verhaeghe broke the Panthers' playoff scoring record that Ray Sheppard set on a four-point night back on April 22, 1996 - which remains the last, and only, season in which the Panthers won a playoff series.

They can change that Friday, when Game 6 is played in Washington. Game 7, if necessary, would be back at Florida on Sunday.

NEW YORK (AP) - Filip Chytil scored the tiebreaking goal early in the third period and New York staved off elimination with a victory over Pittsburgh in Game 5 of the teams' first-round playoff series.

Jacob Trouba and Alexis Lafreničre each had a goal and an assist, and Adam Fox and Ryan Lindgren also scored for the Rangers. Igor Shesterkin, torched for 10 goals over three periods in the previous two games, had 27 saves.

Jake Guentzel had two goals and Kris Letang also scored for Pittsburgh, which leads the best of seven series 3-2. Evgeni Malkin had two assists and Louis Domingue finished with 29 saves.

Penguins star Sidney Crosby left with about seven minutes remaining in the second period with an apparent injury and didn't return.

Game 6 is Friday in Pittsburgh, and a potential deciding Game 7 would be Sunday back at Madison Square Garden.