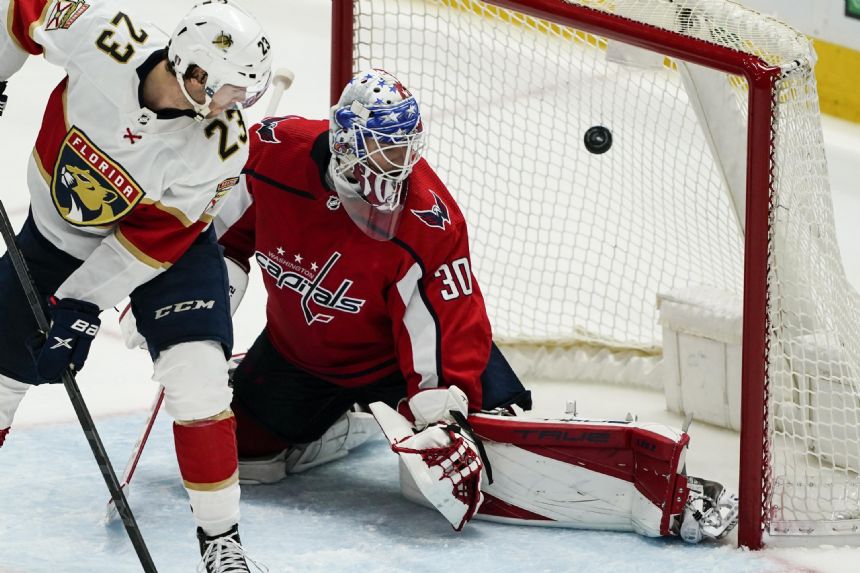 WASHINGTON (AP) - Sam Reinhart tied it late in regulation, Carter Verhaeghe scored his second of the game in overtime and the Presidents' Trophy-winning Florida Panthers beat the Washington Capitals 3-2 in Game 4 on Monday night, tying the first-round series.

Verhaeghe scored 4:57 into overtime to keep the NHL's best regular-season team from getting pushed to the brink of elimination. It's a best-of-three series now with Game 5 on Wednesday night at Florida.

The Panthers were just over two minutes away from facing the prospect of getting knocked out at home. Then, with goaltender Sergei Bobrovsky pulled for an extra attacker, Reinhart collected a loose puck after it bounced off Capitals forward Garnet Hathaway and beat Ilya Samsonov with 2:04 remaining in the third period.

T.J. Oshie scored on the power play in the first, and Evgeny Kuznetsov put Washington ahead on a breakaway goal midway through the third.

PITTSBURGH (AP) - Sidney Crosby had a goal and three assists to become the sixth player in NHL history to reach 200 career playoff points and Pittsburgh routed New York to take a 3-1 lead in the first-round series.

Jake Guentzel scored for the fourth consecutive game and Jeff Carter, Danton Heinen, Mark Friedman and Mike Matheson also beat Igor Shesterkin as the Penguins chased the Vezina Trophy favorite for the second time in three days to move within one game of advancing in the postseason for the first time since 2018. Louis Domingue made 22 saves to win his third game of the series.

Shesterkin sat out the third period after giving up six goals on 30 shots. Alexandar Georgiev allowed Evgeni Malkin's second goal of the playoffs in the third.

Alexis Lafreniere picked up his first career postseason goal for the Rangers to give New York an early lead. Adam Fox scored his second of the playoffs.