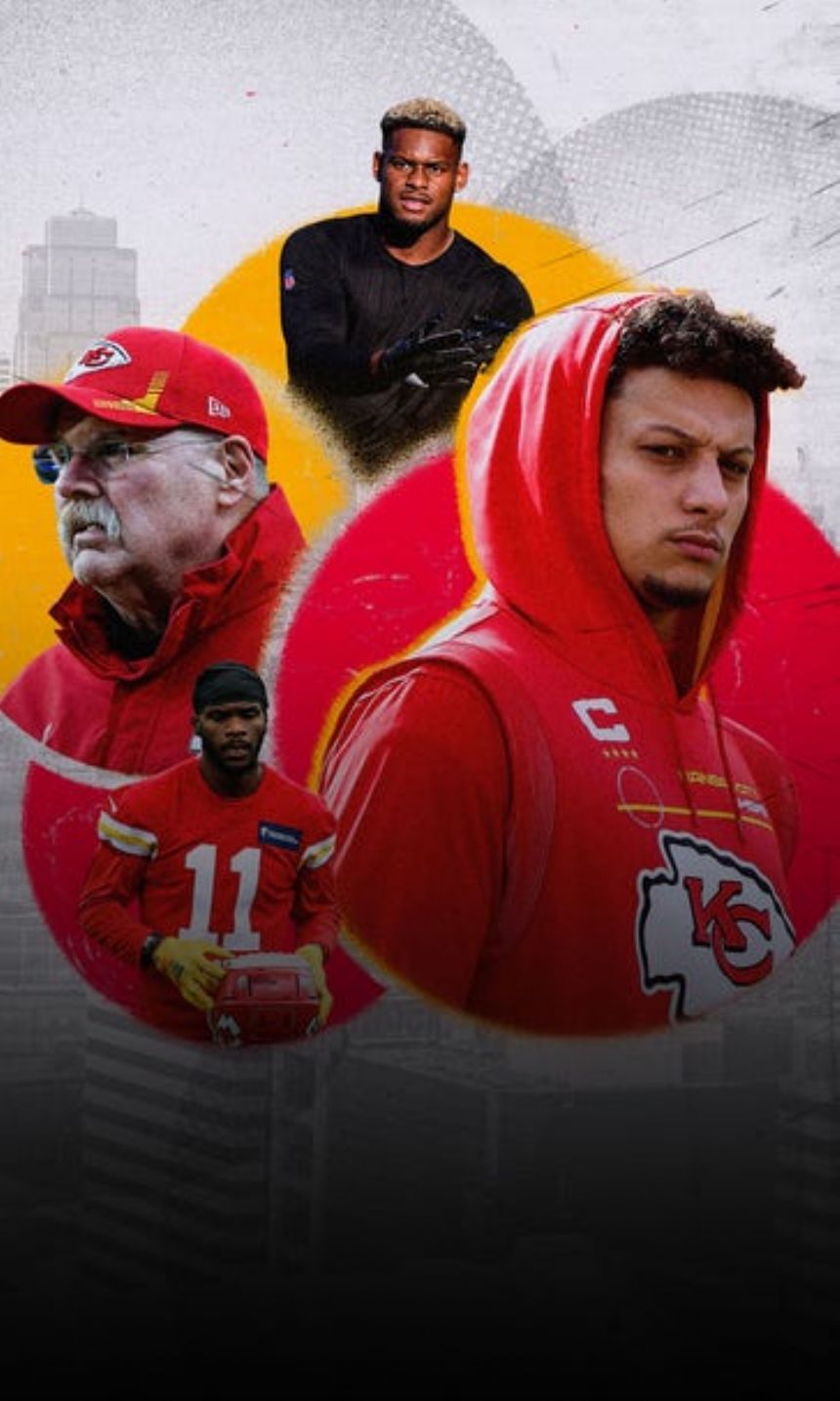 Andy Reid waved a dismissive hand when asked about the criticism leveled at Patrick Mahomes by former Chiefs receiver Tyreek Hill, who claimed he didn't get the ball enough last season.

Yes, that's the same Hill who finished with a career-high 111 receptions for 1,239 receiving yards and nine touchdowns in his final season in Kansas City.

Chiefs coach Andy Reid joins Colin Cowherd to discuss what led to the trade of Tyreek Hill to Miami and the little things Patrick Mahomes needs to improve on.

Mahomes offered more deflection when asked about Hill's claims that his new quarterback in Miami, Tua Tagovailoa, is more accurate than the one who helped him earn a Super Bowl ring.

"I'm sure it had something to do with trying to give his podcast some stuff and get it rolling," Mahomes joked. "Definitely, I still love Tyreek. He's a one-of-a-kind player."

Reid and Mahomes aren't dwelling on the past because Hill is gone, and they must spend their time this offseason recreating what was one of most explosive and dynamic offenses in the NFL without the services of one of their best playmakers.

What Mahomes can lean on is Reid's history of being the leader historically of some of the best offenses in the league. But without Hill, the Chiefs will have to do it differently.

Geoff Schwartz breaks down why you should bet on Kansas City to win more than 10 games behind Patrick Mahomes and Andy Reid.

Here are three ways the Chiefs can keep their offense rolling in the post-Hill era.

1. Don't get bored with short completions

First off, let's not get it twisted. The Chiefs finished No. 3 in total offense (396.8 yards per game) and No. 4 in points per game (28) last season. So Mahomes and company moved the ball.

However, opposing defenses did a better job of slowing them down, particularly the Cincinnati Bengals in the second half of their 27-24 overtime victory in the AFC Championship Game.

Those teams took a page out of the defensive playbook of Tampa Bay Buccaneers head coach Todd Bowles. In his team's win over the Chiefs in the Super Bowl two years ago, Bowles employed two-high safety looks to keep Kansas City's electric playmakers from getting deep and creating explosive plays.

The Chiefs finished No. 11 in the NFL, with 58 passing plays of 20-plus yards in 2021. That's the first time since 2017, when Alex Smith was the starting quarterback, that the Chiefs did not finish in the top 10 in the league in that category.

According to Next Gen Stats, the Chiefs saw two-high safety looks a league-high 66.2 percent of the time last season. In the AFC title game, that number climbed to 69 percent as Kansas City failed to hold onto a 21-3 halftime lead against Cincinnati.

Marcellus Wiley ponders whether the Chiefs will take a step back after trading away Tyreek Hill.

"That second half I played, I really didn't play good football at all," Mahomes said. "It's probably the worst playoff football I probably played in the second half of that game. I'm just trying to use that as a learning thing, that whenever I'm struggling, or the team's struggling, just find a way to get positive plays. Because when you have a lead like that, you don't want to lose that lead."

Mahomes went on to say he must be better at taking what the defense is giving him. The adjustment for the Chiefs this offseason was to add more big-body receivers like JuJu Smith-Schuster and Marquez Valdes-Scantling through free agency - along with Clemson undrafted rookie signee Justyn Ross - to win in the middle of the field, shifting the focus to polished route runners who create separation.

"I like the guys we've brought in," Reid told reporters last week. "They have a feel for space. I'm always worried about that a little bit. They did a nice job with it. This camp is all passing. We don't run the ball. So, it gives you a good idea in the pass game what the guys are capable of, and I liked it. We just need more reps."

To help develop better chemistry, Mahomes invited his new pass-catching group to Texas before the team's offseason program began and plans to do the same thing this summer before the start of training camp.

"We'll have some guys down there," Mahomes told reporters last week. "Lucky enough, some of those guys already live in Texas. And we'll be working out, throwing. You don't want to do too much obviously going into training camp. But we're trying to keep everybody fresh and working."

Nick Wright speculates whether the Chiefs are approaching rebuild territory and what they need to do to capitalize on Patrick Mahomes' prime.

Reid's offense has never been known for a run-first approach. However, he has had talented runners in the past that created balance, including LeSean McCoy, Duce Staley, Brian Westbrook and Kareem Hunt.

With defenses concerned about giving up big plays in the passing game, the Chiefs should use that to their advantage and turn to the running game more.

Last season, the Chiefs averaged 4.54 yards per carry, good enough for No. 7 in the NFL. However, Kansas City totaled just 116 rushing yards a contest, No. 16 in the league. Further, The Chiefs' 431 carries was No. 20 in the league last season.

Mahomes is one of the better play-action passers in the game. He finished 118-for-174 (67.8 percent) on play action throws, totaling 1,174 passing yards, with 17 touchdowns and four interceptions last season, per Next Gen Stats. Mahomes had a 109.7 passer rating on play-action passes.

Another way for the Chiefs to create more chunk plays is to run the football more, creating deep shots for the team's bigger receivers in the play-action game.

Marcellus Wiley explains why Josh Allen has surpassed Patrick Mahomes as the best quarterback in the NFL.

To that end, Reid beefed up his running back room this year, signing Ronald Jones II in free agency, bringing back Jerick McKinnon and selecting Rutgers product Isaih Pacheco in the seventh round of this year's draft. They join starter Clyde Edwards-Helaire and Derrick Gore in what should be a crowded competition during training camp.

"You can't have enough running backs," Reid told reporters. "Particularly experienced ones. ... I think Brett (Chiefs GM Brett Veach) has done a nice job of just bringing in competition. And that will help us down the road becoming a better football team."

Tight end Travis Kelce and Hill accounted for nearly 50 percent of Kansas City's receptions last season and have received the bulk of the targets for the Chiefs since 2016.

That will change with Hill gone. Kelce remains one the best tight ends in the NFL and will continue to be a mainstay in the offense. Mecole Hardman, who has a similar skill set to Hill, should see an uptick in targets, along with new receivers like Smith-Shuster and Valdes-Scantling.

For Reid, it should be a return to a more traditional West Coast offense in terms of spreading the ball around to different pass catchers, not allowing defenses to zero on two dominant pass catchers.

"What you're going to see from this offense this year is it's going to be everybody," Mahomes told reporters last month. "It's not going to be just one guy. Obviously, Travis is still going to get a lot of completions and a lot of yards. And I think the whole receiving room is going to have big plays. And that can be something we can use to our advantage."