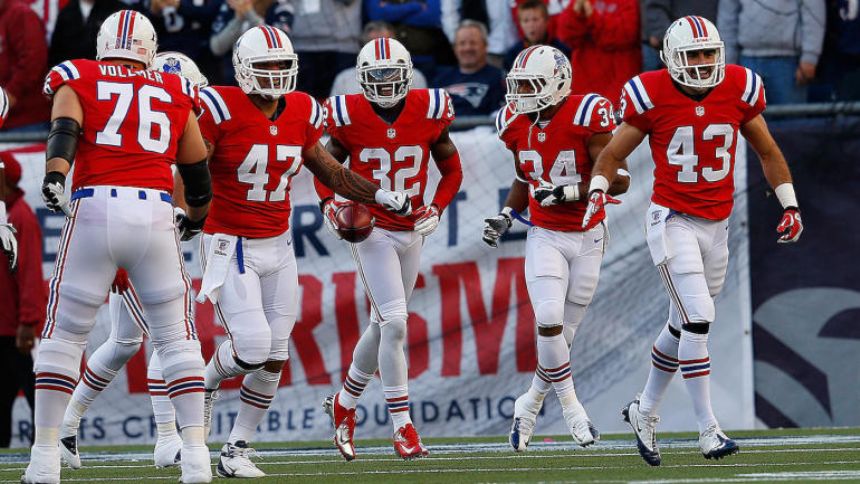 The New England Patriots are going back to their roots during the 2022 season. The team officially announced on Wednesday that they are bringing back their red "Pat Patriot" uniforms for select games later this fall. This had previously been back in early December, but this announcement solidifies that these jerseys will, in fact, make their return this year.'

Coupled with the announcement came a "Back to the Future" style video that featured a handful of current Patriots -- like Matthew Slater, David Andrews, and Kendrick Bourne -- jumping in a DeLorean and emerging in the class jerseys.'

Wait a minute, Doc. Are you telling me the red uniforms are back? pic.twitter.com/X1pd6kpdpG

The Patriots after the NFL opted to remove the "one-shell rule" that prevented clubs from wearing more than one helmet during the season. Because these red throwbacks would also require the team to wear the white Pat Patriot helmet, they were previously unable to don them.'

The "one-shell rule" was initiated before the 2013 season and was an attempt by the league to enhance player safety as it believed that a worn-in helmet was safer to wear than a brand new one.'

The Patriots were one of the teams that pushed for the "one-shell rule" to be dissolved so that they could bring these throwbacks back into the rotation.'

"There was a sort of understanding here that, no, we're not going to wear the silver helmets with the red throwbacks, right? That would be a different alternate uniform," said Vice President of Customer Marketing & Brand for Kraft Sports + Entertainment Ali Towle, via the official team website. "We wanted to stay pure to that original throwback, and so that's why we waited and kept lobbying the league to change it back. We fought the good fight."

The red uniforms were the original threads of the Patriots beginning in 1960 until 1993. It was at that juncture that the team opted for a makeover and introduced the blue uniforms with the silver "Flying Elvis" logo on the helmet.'