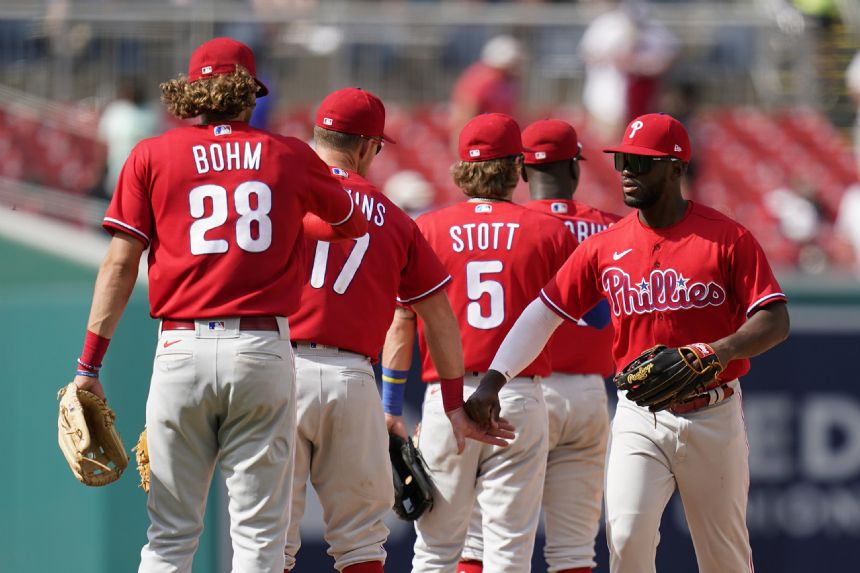 WASHINGTON (AP) - Bryce Harper had three hits against his old team, and the Philadelphia Phillies beat the skidding Washington Nationals 5-3 Friday in a doubleheader opener for their 13th win in 15 games.

Nick Castellanos drove in two runs and scored another for the Phillies, who improved to 12-2 under interim manager Rob Thomson. Philadelphia's 10-game winning streak against the Nationals is its longest against the franchise since 10 in a row against 1991 Montreal Expos.

Harper raised his average to .323.

Washington has lost six straight, dropping to an NL-worst 23-44. Josh Bell homered for the Nationals, who have lost nine of 11 overall and nine straight home games to the Phillies.

Playing a makeup of a game postponed by the lockout on a 91-degree afternoon, the Phillies staked starter Ranger Suarez to a 2-0 lead before he threw a pitch thanks to Castellanos' two-run double off Joan Adon (1-11).

Castellanos was in the middle of Philadelphia's rally in the third, following Harper's single by poking a double to right that Juan Soto appeared to misjudge. Odubel Herrera had a run-scoring groundout and Alec Bohm hit an RBI double to a 4-0 lead.

Washington managed one run in the first five innings, but Bell's two-run homer into the right field bullpen in the sixth closed the gap to 5-3. Suarez (5-4) yielded three runs and six hits in 5 2/3 innings while striking out five.

Brad Hand worked the ninth, escaping a two-on, one-out jam of his own making for his second save.

Adon, summoned as Washington's 27th man for the doubleheader, allowed four runs and struck out six in five innings in his first start for the Nationals since June 7. He also extended his major league lead in losses; teammate Patrick Corbin ranks second with nine.

Former Washington infielder Ryan Zimmerman's No. 11, which will be retired Saturday, was painted on the field in foul territory along both baselines. Zimmerman was the Nationals' first draft pick after moving to Washington and played his entire 16-year season career with the franchise.

Phillies: LHP Bailey Falter was designated as Philadelphia's 27th man and was scheduled to start the second game.

Nationals: DH Alcides Escobar (right hamstring strain) went 0 for 4 Thursday as his rehab assignment for Triple-A Rochester continued. He is 1 for 7 with a home run overt two games. ... LHP Evan Lee departed in the seventh after walking four of his last five batters. He also threw two wild pitches in that stretch. ... Washington recalled RHP Cory Abbott from Rochester and optioned RHP Andres Machado to Rochester. Machado was 0-0 with a 5.48 ERA in 17 games for the Nationals.