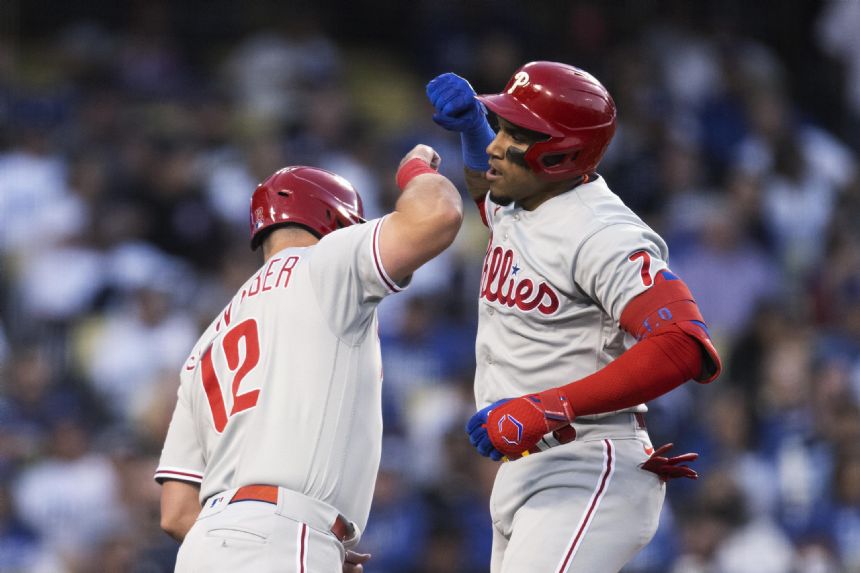 LOS ANGELES (AP) - Bryce Harper homered and drove in three runs, the Philadelphia Phillies pushed two runs across in the ninth inning after squandering a six-run lead and beat the Los Angeles Dodgers 9-7 on Thursday night.

The Phillies saw their 7-1 lead evaporate after the Dodgers used a four-run eighth to tie the game 7-all.

In the ninth, the Phillies scored a run on a wild pitch by reliever Daniel Hudson with the bases loaded. Harper then hit a sacrifice fly to give the Phillies a two-run lead. Hudson (1-3) took the loss.

In the bottom of the ninth, Los Angeles loaded the bases against former Dodgers pitcher Corey Knebel. Austin Barnes flew out to right, Cody Bellinger fouled out to left, and Chris Taylor flew out to center as Knebel earned his seventh save in the wild win.

Harper was 2 for 4 with 3 RBIs. He hit a solo home run in the first inning, his seventh of the season. Earlier in the day, Harper got confirmation he had a small tear in his right elbow and will need a platelet-rich plasma injection Sunday. The reigning NL MVP can't throw for four weeks, but he can certainly still hit from the designated hitter spot as he did once again on Thursday.

Johan Comargo also homered for the Phillies, a two-run shot in the second inning. Andrew Bellatti (1-0) worked 2/3 of a inning and picked up the win.

Down 7-3, the Dodgers rallied and tied the game with four runs in the eighth. They loaded the bases against reliever Jose Alvarado. Will Smith drove in a run and Justin Turner hit a pinch-hit double to score two runs, pulling the Dodgers within 7-6. Chris Taylor singled in a run to tie the game at 7. Hanser Alberto bunted into a fielder's choice as the Phillies threw out Austin Barnes - running for Turner - at the plate, and Freddie Freeman popped out to third to end the inning.

Cody Bellinger hit a solo home run in the third inning to start the comeback after Wheeler had retired the first six batters of the game.

Yency Almonte made his Dodgers' debut after his contract was selected from Triple-A Oklahoma City. Almonte pitched two scoreless innings and retired all six batters he faced, the final four by strikeout.

Phillies: DH Bryce Harper (small tear right elbow) will miss Sunday's game against the Dodgers with a PRP injection. He might miss Tuesday's game in San Diego, but will continue to be in the lineup as the designated hitter. He can't throw for four weeks.

Phillies: RHP Kyle Gibson (3-1, 2.94 ERA) earned the win against the Mets after a quality start, allowing two runs in six innings. Philadelphia has won four of the six games he' has started.

Dodgers: LHP Clayton Kershaw (4-0, 1.80 ERA) pitched seven scoreless innings and allowed five hits in a road win against the Chicago Cubs. He has won four of his six starts this year and had no decision in the other two.