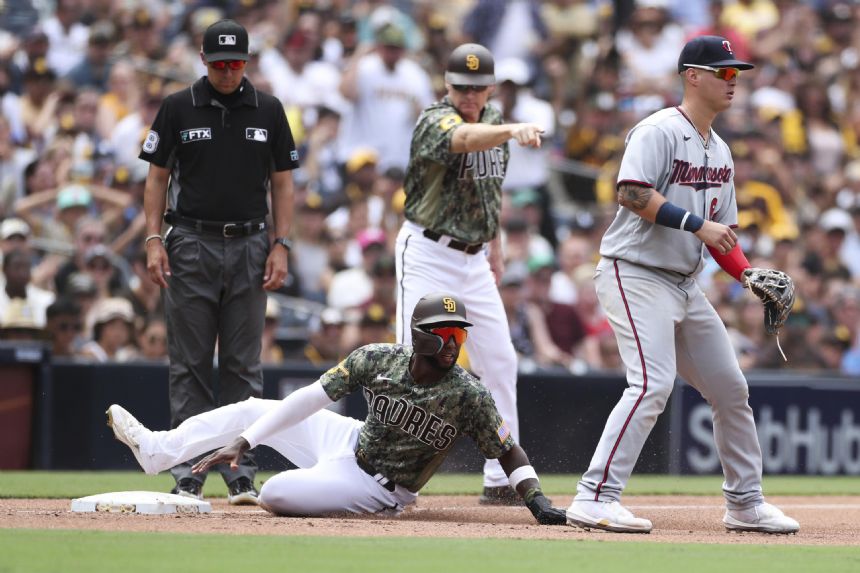 SAN DIEGO (AP) - Jurickson Profar homered for the second straight game and had a hand in the go-ahead rally for the San Diego Padres, who beat the AL Central-leading Minnesota Twins 3-2 Sunday to take two of three in the series.

That sixth-inning rally backed left-hander Sean Manaea (6-5), who overcame home runs by Luis Arraez and Jose Miranda to get the win. Luis Garcia pitched a perfect ninth for his first save. The Padres are giving Taylor Rogers a break from the closer role after he blew consecutive saves last week against Detroit.

The Twins came back with homers by Arraez leading off the fifth, his sixth, and Miranda with one out in the sixth, his 10th.

The Padres took the lead while chasing Bundy during a sixth-inning rally. Trent Grisham and Profar opened the inning with consecutive singles to run Bundy, who was replaced by former Padres reliever Emilio Pagan. After Manny Machado lined out to center, Jake Cronenworth singled in the tying run and Luke Voit singled in the go-ahead run.

Bundy gave up three runs and four hits in five-plus innings, struck out three and walked none.

Padres manager Bob Melvin was ejected for arguing with first base umpire Jerry Layne in the fifth inning after a call was overturned after video review. Padres first baseman Eric Hosmer caught Byron Buxton's foul ball up against the netting, but the Twins challenged and the call was overturned, with the ruling that the ball hit the netting on the way down.

Buxton eventually struck out and Carlos Correa was intentionally walked to load the bases before Jorge Polanco hit into a force to end the inning.

Twins: Haven't named a starter for Monday night's opener of a home series against Detroit.

Padres: RHP Mike Clevinger (2-3, 3.38) is scheduled to start Monday night in the opener of a five-game home series against the Rockies, who will counter with Antonio Senzatela (3-5, 4.90).