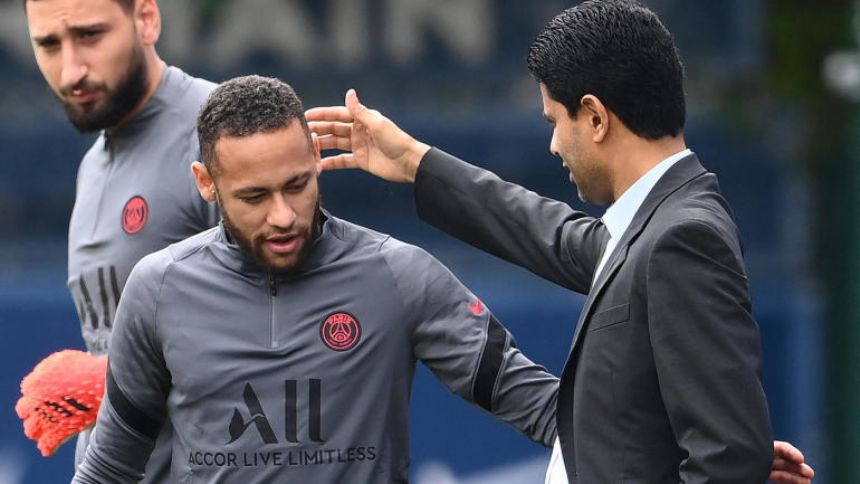 Paris Saint-Germain is likely to be one of the busiest European clubs this summer with a new era being overseen by and after and . Nuno Mendes has already been secured on a permanent basis with Vitinha expected to follow from FC Porto and as well as and Stade de Reims' Hugo Ekitike all of interest.

"The dream is one thing and reality is another," Chairman and CEO Nasser Al-Khelaifi told Le Parisien of this summer's changes. "Perhaps we should change our slogan as 'Dream Bigger' is good, but we must be realistic above all else. We no longer want to be flashy and bling-bling -- no more glitter. We have done great things for 11 years, but each year we ask ourselves how to be better.

"I can tell you that we expect all of the players to do more than last season -- much more," added the Qatari. "They must all be at 100%. Obviously, we were not good enough to go far. The objective for next season is clear and that is to go at 200% each day, give everything for the jersey, give the maximum and see the results. We must become humble again. You must be disciplined on and off the pitch and whoever wants to stay in their comfort zone and not fight will be cast aside. We want players proud to represent PSG and ready to fight."

We break down PSG's roster and look ahead to this summer.

If any club in Europe does not need another goalkeeper, it is PSG. With so many good quality options on the books, it is logical that this summer will be more about establishing a recognized hierarchy rather than bringing anyone else in. Whether it is Navas or Donnarumma, Galtier needs to pick a clear No. 1 choice and their backup must be happy to occupy that role. Rico has done it in the past, but neither the Costa Rican nor the Italian will be happy to time share once more.

Ideal move: Identifying a clear starting shot stopper, their backup and potentially setting clear expectations regarding game time. If that means moving several players on and bringing in a reserve goalkeeper who accepts that will be their role, so be it. However, between Navas and Donnarumma, there is already enough starting quality.

Craving even more coverage of the world's game? Listen below and follow'ˇQue Golazo! A Daily AP Soccer Podcast'where we take you beyond the pitch and around the globe for commentary, previews, recaps and more.

Ideal move: In this position, only Marquinhos is truly guaranteed to stay in central defense while the right and left sides are two rare positions which should be set for next season at least in terms of their starters. A few peripheral figures could go from uncertain to leaving while Kimpembe should logically be kept on and Ramos' experience and leadership could be considered vital by Galtier and Campos.

This is the main area which requires Campos' attention this summer. Early moves for Vitinha and Sanches could give the unit a new look, but a lot will depend on who ultimately gets moved with even Paredes not safe despite PSG adding an additional year to his deal via an option. Verratti being the only guaranteed figure to stay makes sense given that the team's midfield often feels like the Italian on his own.

"Luis Campos will focus on the first team," explained Al-Khelaifi. "We want to discover new talents and new markets. We have to explore new directions and find players who will be proud to be in Paris playing for the club and here only for soccer. We will create an advisory committee. It will be a council of five to seven high level figures in love with PSG. People with ideas who are ready to help with their experience."

Ideal move: A purge of the dead wood in this position is a must with increased game time needed for many of the youngsters too. Once clearer, a midfield enforcer such as RC Lens' Seko Fofana could appeal depending upon price.

Only Mbappe and Messi are really guaranteed to be part of PSG's planning in attack moving forward into this coming season, but Neymar could change that given how difficult it will be to move him on and how a new mindset could turn him into something of a new signing. Icardi is being pushed towards the exit while Kalimuendo could be allowed to move on after impressing with Lens while Ekitike is being eyed.

"My goal for the coming years is to only have Parisian players in the team," said Al-Khelaifi of French talent. "There is so much talent in our region. The best players in our region deserve to play for PSG. It will take time, but it is a goal. We want players who love the club, love to fight and love to win. We want this mentality to spread throughout the club."

Ideal move: Some clarity regarding Neymar's future and whether he can be counted upon is vital as he would transform how this attack appears. Planning for life after Messi beyond this season will be necessary and Mbappe is now the main player PSG will be building around. A versatile young attacker with high potential but already performing at a good level would make the most sense.