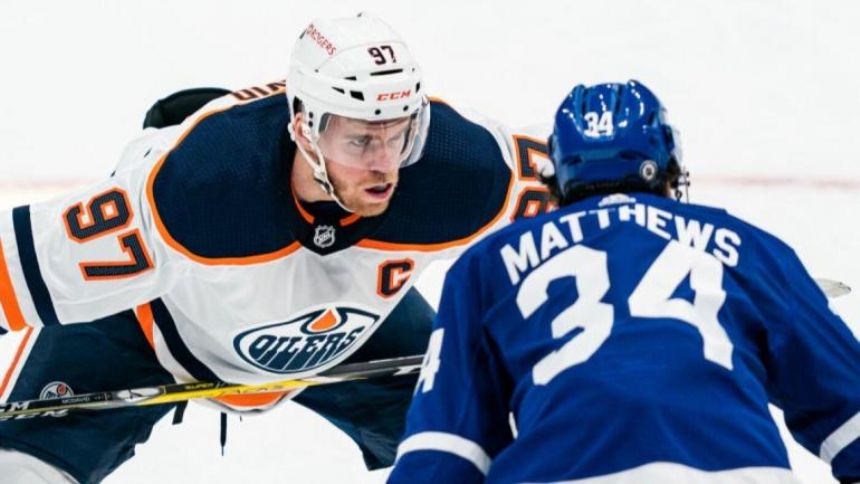 Some of the greatest NHL players to ever lace up a pair of skates manned the middle of the ice. All-time greats such as Wayne Gretzky, Mario Lemieux and Mark Messier have all played center throughout their legendary NHL careers.

It's a position that carries loads of responsibility, from being a playmaker to winning key face-offs. When it comes to center in today's NHL, not much has changed. Some of the league's most talented players play the position. Five of the top 10 NHL points leaders from the 2021-22 season were centers.

Given the importance of the position, we compiled a list of the NHL's top 10 centers. We took a look at their career production, where their career currently stands and how they could perform in the future:

For the last 18 seasons, Bergeron has established himself as one of the top center-ice men in the NHL. The Bruins center has a list of accolades a mile long, including being a five-time Selke Trophy winner (given to the league's top defensive forward), a three-time All-Star and a Stanley Cup champion. The 37-year-old star won the Selke Trophy once again for his performance during the 2021-22 campaign. Bergeron is a force on both ends of the ice and still holds that distinction even as he enters his 19th professional season. Last season, the star forward won an NHL-leading 61.9 percent of his face-offs. Bergeron just affects the game in so many different areas, so he had to have a place on this star-studded list despite being in the latter years of his career.

In just six full seasons, Aho has developed into one of the most talented goal scorers. During that span, Aho has recorded 182 goals and 219 assists as the Hurricanes' top-line center. In three of his six seasons, Aho has topped the 30-goal mark, including netting a career-high 38 goals in 68 games during the 2019-20 season. It's no secret that Aho has an absolute cannon of a shot that has given NHL goaltenders issues. With plenty of years of elite production left, Aho is going to be one of the league's premier goal scorers for quite some time.

The Rangers have really managed to strike gold with the dynamic duo of Zibanejad and Artemi Panarin on their top line. So much so that Zibanejad is one of the more underrated centers in the league. Over the course of his 11-year career, Zibanejad has racked up 229 goals and 286 assists. He is coming off a 81-point (29 goals and 52 assists) campaign. Zibanejad was a solid center as he started off his career with the Ottawa Senators, but he's truly become elite during his time in the Big Apple.

Entering the 2021-22 season, it was unknown whether hockey fans would ever see Stamkos produce at an elite level again. Well, those concerns were quickly put to rest as Stamkos put together a 106-point (42 goals and 64 assists) campaign. It marked the first time in his career that Stamkos topped the 100-point mark, and his 64 assists were also a career-high. Oh, and Stamkos registered a team-high 11 postseason goals in Tampa Bay's third consecutive run to the Stanley Cup Final as well. At 32, Stamkos is still clearly as dangerous as ever on the offensive end of the ice, and his elite level of play places him in the upper echelon of the league's centers.

Barkov was arguably one of the biggest reasons the Panthers captured the Presidents' Trophy last season. Despite missing over a month of action, he managed to compile 88 points (39 goals and 49 assists), which was the second-highest point output of his nine-year career. The 26-year-old star also excelled in the face-off circle by winning 56.9 percent of his draws, which was good for 10th in the league. Barkov is an absolute wizard around the net, as he loves to score top-shelf goals in close. He's as crafty as they come and possesses some insane stick-handling skills.

It seems almost criminal to think there are four centers ranked ahead of Crosby, but here we are. The Penguins star may not be quite as lethal of a player as he used to be, but Crosby is still one of the top guys occupying the center of the ice. Crosby is coming off a season in which he tallied 31 goals and 53 assists in 69 games. The 35-year-old star's 84 points was his highest total since he recorded a 100-point season in the 2018-19 campaign. Crosby's playmaking ability is still in the elite realm, and it doesn't hurt that he has talented forwards like Evgeni Malkin and Jake Guentzel to pass the puck to. While he's getting older, it was refreshing to see Crosby bounce back after a few down seasons.

During the Avalanche's Stanley Cup run, MacKinnon's talent was on full display. He led the Avalanche with 13 goals in the Stanley Cup Playoffs and showcased why he's one of the elite centers in the sport. When MacKinnon gets a full head of steam, there's very few players as dangerous with the puck on their stick. The five-time All-Star also isn't half bad when he's dishing out the puck to his teammates: the 2021-22 campaign marked the fourth time over the past five seasons that MacKinnon registered 50-plus assists.'

The Oilers have a luxury that very few NHL teams have: possessing two elite centers on their roster. As talented as Connor McDavid'(more on him in a minute) is, fellow center Leon Draisaitl is just as gifted of a player. Draisaitl is fresh off of a season in which he finished fourth in the league in points (110), behind only McDavid, Johnny Gaudreau and Jonathan Huberdeau. The Oilers star is a big-bodied center that uses his size to his advantage when he drives the puck to the front of the net. He put that on display last season by finishing second in the NHL in goals (55). There's no better second-line center in the NHL than Draisaitl.

As impressive as McDavid was throughout this past season, Matthews was arguably bettter. The talent was always there for Matthews, but the 2021-22 season was when the Maple Leafs star really put it together. Matthews was a human highlight reel en route to compiling a career-high 60 goals. The former No. 1 pick surpassed Rick Valve's previous franchise record of 54 goals in a single season, which was set back in 1981-82. Matthews had never registered more than 80 points in a season prior to the 2021-22 campaign, so it's going to be interesting to see if this is the new norm.

It shouldn't be any surprise that McDavid sits atop this list. He is basically the top player in the sport because of his spectacular playmaking ability. During the 2021-22 season, the Oilers star tallied a 123 points, clearing the 100-point plateau for the fourth time in his seven-year NHL career. McDavid is as flashy as they come when he has the puck on his stick. On multiple occasions last season, he weaved his way through an entire defense and potted highlight reel-type goals. As special as his numbers were, what may have been the most impressive was the fact that he led Edmonton to their first Western Conference Final since 2006. McDavid and the words "elite" simply go together hand-in-hand. Considering all that he's accomplished in his seven-year career, there's no doubt that McDavid is the top center the NHL has to offer.