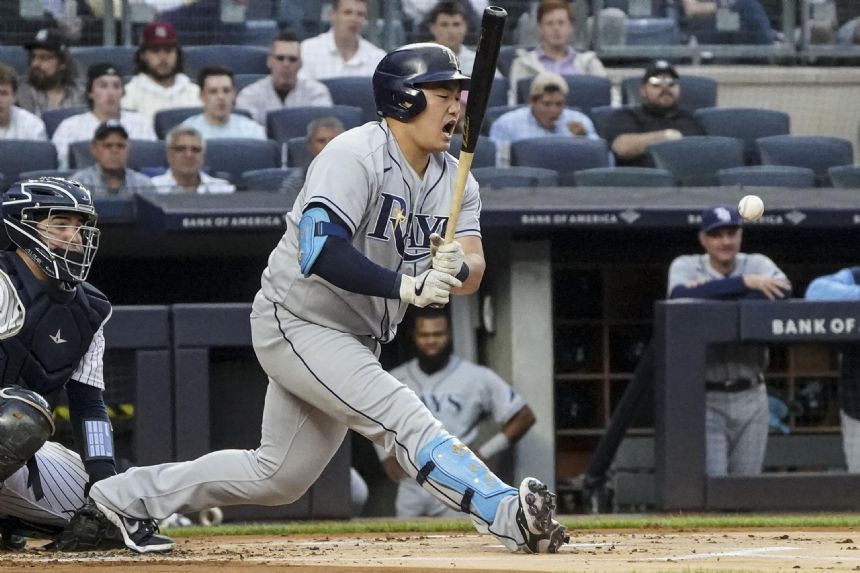 The Tampa Bay Rays came into the season with Wander Franco at shortstop, Brandon Lowe at second base and Mike Zunino behind the plate. With that kind of strength up the middle, a third straight AL East title seemed like a real possibility.

Now all three of those players are injured, and Tampa Bay - along with the rest of the division - has been left behind by the New York Yankees.

The Rays lost two of three at Baltimore over the weekend and dropped seven of nine overall on their road trip. That slump included a three-game sweep at the hands of the Yankees, who lead third-place Tampa Bay by 13 games and second-place Toronto by 11.

For the Rays, the offense has been the primary culprit. They rank 26th in the major leagues in both on-base percentage and slugging. Franco hasn't played at all this month because of a quadriceps injury. Lowe, who hit 39 home runs last season, has only five in 32 games in 2022. Back problems have sidelined him for over a month.

Zunino also has just five homers after hitting 33 in 2021. He went on the injured list just over a week ago with a shoulder problem.

Even so, the Rays are still six games over .500. They have the fourth-best ERA in baseball, and Shane McClanahan (1.84) leads the American League in that category. But in an unforgiving AL East - with the Yankees on pace for 120 wins, and the Blue Jays and Red Sox also in contention for the postseason - Tampa Bay is facing some significant adversity.

Atlanta entered its series with Chicago on a 14-game winning streak, and the Cubs had lost 10 in a row. So naturally, Chicago took the opener 1-0 on Friday.

It was the first time two double-digit streaks ended in the same game since Philadelphia's win over Houston on Sept. 15, 1999 - which ended an 11-game skid for the Phillies and a 12-game winning streak for the Astros.

The Braves also lost to the Cubs on Saturday, but they managed a victory Sunday. Atlanta went 21-8 in a stretch of 29 straight matchups against teams under .500 when the game was played.

There had only been one immaculate inning - in which a pitcher strikes out the side on nine pitches - in the majors this year. Then two Houston Astros pulled it off in the same game. Luis Garcia did it in the second inning Wednesday against Texas, and Phil Maton did it in the seventh.

The Texas batters - Nathaniel Lowe, Ezequiel Duran and Brad Miller - were the same in both those innings.

LINE OF THE WEEK

Jack Suwinski hit three homers Sunday, and the final one gave Pittsburgh a 4-3 victory over San Francisco. He became the first rookie to cap a three-homer game with a game-ending drive, according to the Elias Sports Bureau. He also became the second Pirates rookie with a three-homer game. The only other one was Andrew McCutchen, who did it in 2009.

COMEBACK OF THE WEEK

The Yankees appeared well on their way to a 10th straight victory when they led 8-3 in the sixth inning at Toronto on Sunday. Then Lourdes Gurriel Jr. hit a grand slam to pull the Blue Jays within one, and Teoscar Hernandez added a three-run shot in the seventh to give Toronto a 10-8 advantage. The Blue Jays ended up winning 10-9.