Rudiger: It was 'Madrid or nothing' after leaving Chelsea 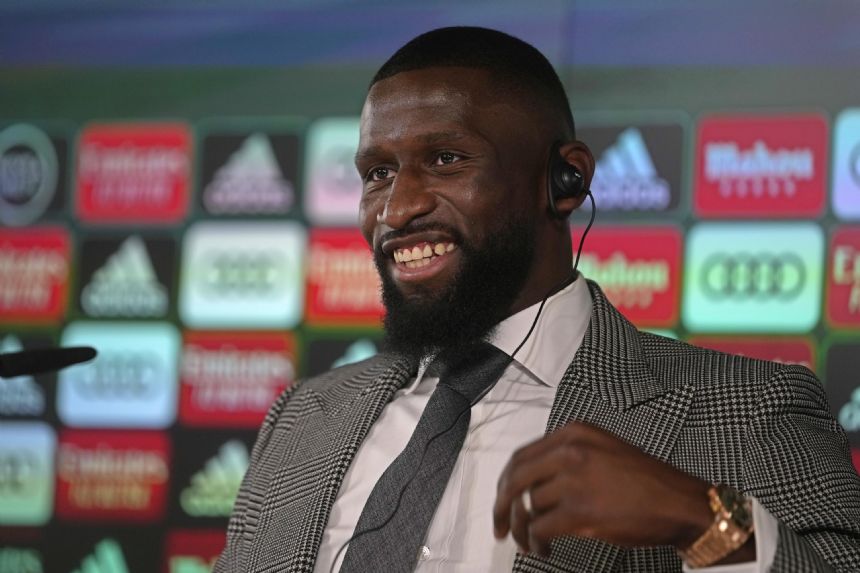 MADRID (AP) - While he was still with Chelsea, Antonio Rudiger experienced first-hand what it felt like to be a Real Madrid player.

He was on the losing end as Madrid pulled off one of its stunning Champions League comebacks that culminated with its record-extending 14th European title this season.

Rudiger said his experience at the Santiago Bernabeu Stadium in that quarterfinal loss made his decision to join the Spanish powerhouse easier.

"The match I played with Chelsea at the Bernabeu was special, so intense," the central defender said during his official presentation at Madrid on Monday.

"It was my first time playing at the Santiago Bernabeu," he said. "It was an incredible feeling for me. After the third goal (for Chelsea), there was still a really positive atmosphere. I took away amazing feelings and having the chance to play for a club like this is unbelievable."

Madrid went down 3-0 in that second leg of the quarterfinals against Chelsea, with Rudiger scoring one of the goals, but the hosts rallied and still advanced.

"I simply wouldn't know how to describe what Real Madrid achieved in the Champions League this year," Rudiger said. "It was unbelievable. Obviously, by the time the final came around I knew I was going to play for Real Madrid. I was right behind them and I was thrilled when they won it. Next year, I want to keep competing for more titles."

The 29-year-old Rudiger said Madrid's archrival Barcelona showed interest in signing him but it was "Madrid or nothing."

"The first contact between Real Madrid and my agent came in September last year," he said. "The second time I spoke to (coach Carlo) Ancelotti himself was in April. My contact with him was the most important moment and that's when I made the decision to join this club. He told me he wanted me here, he trusted me, and that I could really help the team."

Madrid signed a four-year contract with the Germany international, who helped Chelsea win titles in the Champions League, Europa League, Club World Cup, UEFA Super Cup and FA Cup. He scored five goals in 54 matches with Chelsea last season, both a record for him with the club.

Rudiger made his Bundesliga debut with Stuttgart as an 18-year-old before joining Roma in 2015 and eventually Chelsea in 2017.

"(Pepe) has attributes I love. And off the pitch, from what I've seen, he's a good guy, but on the pitch he's a monster," Rudiger said.