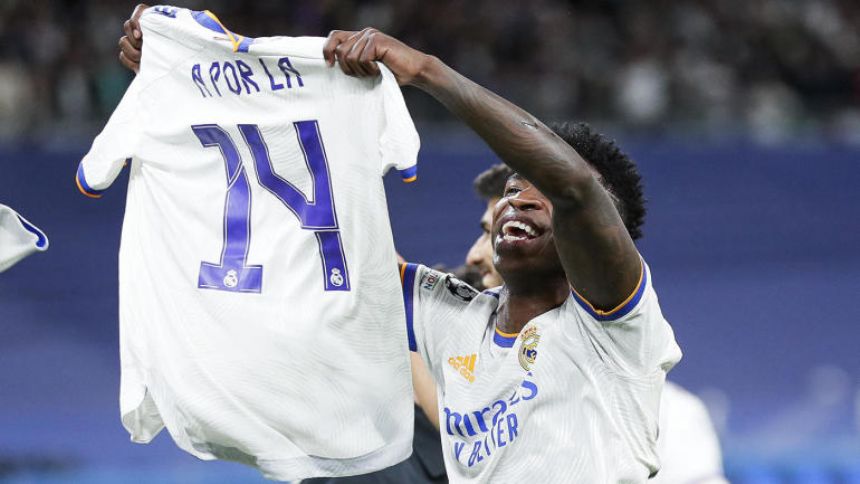 Real Madrid are simply synonymous with the Champions League. With their record 13 titles, this recent version of the team has also been synonymous with the word "comeback." Hardly would you ever consider them plucky underdogs in previous years, but this time around they came from behind against PSG in the round of 16, Chelsea in the quarterfinals and Manchester City in the semifinals for a place in the .'

In what will be their', they underdogs know there is no giant bigger than them in world soccer. They've been here more than any other club, they've won it more than any other club, and they are never, ever out of it. La Liga champions by a mile and with the world's best player in Karim Benzema, Los Blancos have defied the odds by making it here, doing it with remarkable moments.'

Now they're ready to grab, once again, what they believe is rightfully theirs.'

Matchup to watch for Real Madrid

The speedy Vinicius Junior against Trent Alexander-Arnold. Both are players that love to get forward, but Alexander-Arnold getting too far forward against Los Blancos could give Vini Jr. the space he needs to cause some real damage. We saw what he could do against Manchester City. He has the technical ability to do the same to this Liverpool side. While the Reds aren't going to change what they do just because of Vinicius, a plan has to be in place to offer a bit more cover, be it Fabinho sitting a tad deeper or something similar. If the Brazilian winger can get time and space on the counter, past Alexander-Arnold, Real would be situated well to potentially win their 14th UCL crown with his ability to connect with Benzema.

It's definitely Karim Benzema. Before meeting in the quarterfinals last year, Benzema had four goals in three meetings with Liverpool. Fast forward a year, and he's probably the best player in the world right now with an ability to score every single way possible. He's the reference point in attack, the main penalty kick taker, and needing just a half a second to strike, he's surely the most likely and probably will end up finding the net in this one.'

Man of the Match pick for Real Madrid

Luka Modric has to be the creator in the middle, to quickly get the ball out wide to get the attack going, and he'll also be looking to zero in on the feet and head of Benzema. He may be 36, but he's still got it. Everything flows through him, and if Real are to win, he'll be a huge reason why.'

Match prediction: The Reds win their seventh UCL crown, getting revenge for the 2018 final, this time with a competent display in goal and Salah scoring the winner on a penalty kick. Pick:'Liverpool 2, Real Madrid 1.