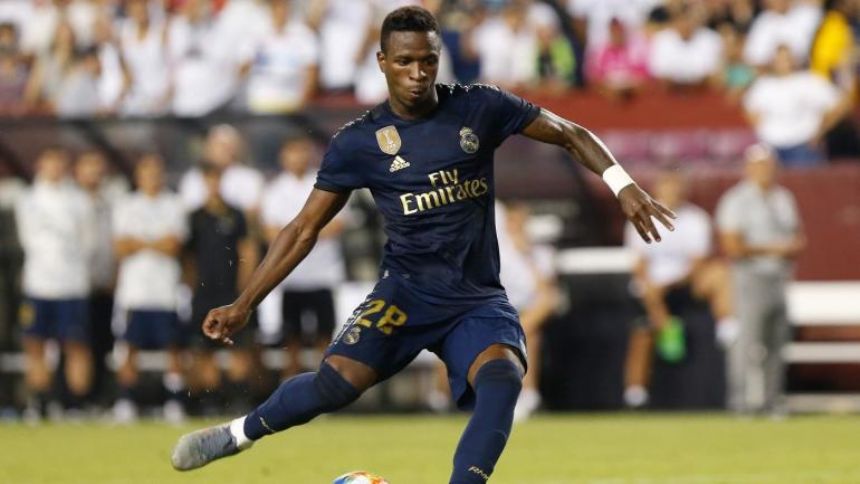 will try to keep their win streak going on Sunday when they visit rival in the Spanish La Liga. The first leg of the 2022 Madrid Derby pits first-place Real (5-0-0) against seventh-place Atletico (3-1-1) at Wanda Metropolitano Stadium. The rivalry is one of the biggest in the world, and it has been tough to predict in recent years. The teams split the two games last season, with each winning at home. The most recent matchup was a 1-0 Atletico victory in May. In addition to their perfect league run, Los Blancos have won both games in this year's UEFA Champions League, including a 2-0 victory against on Wednesday. Atletico lost their UCL matchup with Bayern Leverkusen 2-0 on Tuesday, and they are off to an uneven start, but Los Rojiblancos have always been tough to beat in this fierce rivalry.

Kickoff is set for 3 p.m. ET on Sunday in Madrid. Real are the +129 favorites (risk $100 to win $129) on the 90-minute money line in Caesars Sportsbook's latest Atletico Madrid vs. Real Madrid odds. Atletico are +205 favorites, a draw is priced at +245 and the over/under for total goals is 2.5. Before locking in any Real Madrid vs. Atletico Madrid picks or bets, you need to see the Spanish La Liga predictions from proven soccer insider Martin Green.'

After working in the sports betting industry for several years, Green became a professional sports writer and handicapper and has covered the game worldwide. Since then, his European soccer picks have been stunningly accurate. Green has generated almost $33,000 for $100 bettors since the 2017-18 season, and he is 5-3 on La Liga picks and 22-17 over his past 39 soccer picks overall. He has his finger on the pulse of the game all over the globe.

Why you should back Real Madrid

Los Blancos haven't missed a beat with star striker out with an injury. They have continued to control the pace of play and have found plenty of goals. and lead a midfield that has helped Real hold the ball for 60 percent of their matches. Atletico hold possession for less than 46% of their games. The midfielders have strong attackers who can find open space, led by , who has a team-high four goals. An Atletico defense that has dealt with numerous injuries could face trouble against this Real attack.

Real Madrid lead the league in shots with 107 (21.4 per game) and attempts on target with 39 (7.8 per contest). Atletico have 43 fewer shots overall, and Real has given up just 52 shots, 17 of those on net. The defense has had some slip-ups as the team looks to push forward, but a back line featuring and Antonio Rudiger is more than capable of guarding the fort. is an elite goalkeeper and shouldn't have trouble against an Atletico team that has scored nine goals in five matches. Seven of those goals were scored over two games.

Why You Should Back Atletico Madrid

Los Rojiblancos have given Real fits with their defensive approach, and that continues this season. They have allowed 68 shots, but just 29 of those have been on target, with that 22.1 shooting percentage the stingiest mark in La Liga. And while the Atletico attack hasn't piled up shots, it has been the third-most efficient in the league in putting them on target. They have put 29 of 64 (45.3%) on frame, while Real are hitting the target 36.4% of the time. Atletico have allowed four goals and have been held off the score sheet just once in league play.'

Alvaro Morata (three goals) and (two) are the top scorers, though Griezmann typically comes off the bench. shares the league lead in assists (three) and goal-creating actions (six). The head-to-head results are even over the past 18 meetings at 5-8-5, and they are also all square in the past eight with Atletico playing host (2-4-2). Los Rojiblancos went 12-5-2 with a plus-17 goal differential at home last season. They lost to in their home opener but blasted Celta Vigo 4-1 in their last league match at home last Saturday.

How to make La Liga and Atletico Madrid vs. Real Madrid picks

Green has broken down the Atletico Madrid vs. Real Madrid matchup from every angle and revealed his best bets. He is leaning Under on the goal total and provides three confident best bets, including two that would pay off at plus money. He's only sharing his La Liga picks here.

So, who wins Real Madrid vs. Atletico Madrid in Sunday's Spanish La Liga showdown? And where does all the betting value lie? Visit SportsLine now to see the best bets for the Atletico Madrid vs. Real Madrid match, all from the European soccer expert who has generated almost $33,000 for $100 bettors over the past four seasons, and find out.