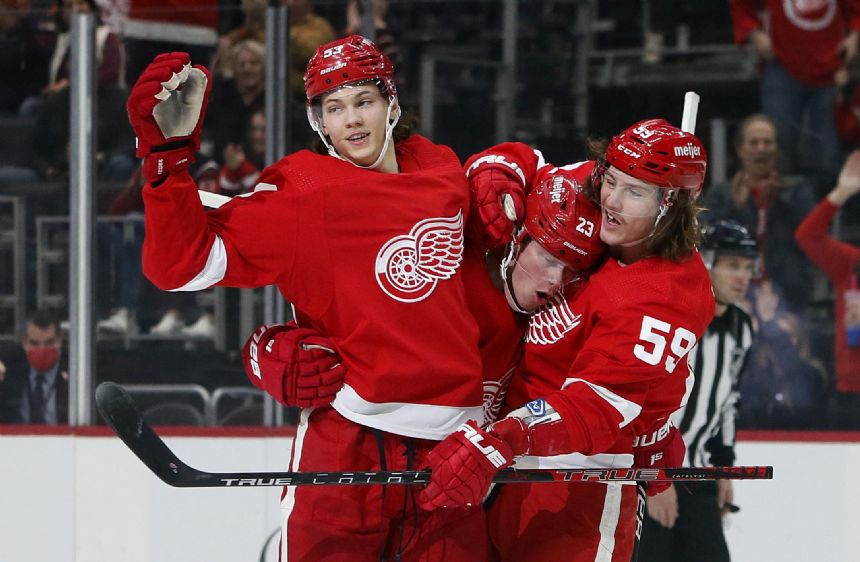 DETROIT (AP) - The Detroit Red Wings have faded from relevance in the NHL due to a lack of stars. Help appears to be on the way with Moritz Seider and Lucas Raymond.

Seider, a savvy defenseman, is the reigning rookie of the year. Raymond is a skilled forward coming off a 57-point debut season.

"They have tremenous potential," general manager Steve Yzerman said. "You look at the top teams in the league, they have elite players."

Seider and Raymond are probably not ready to lead the Red Wings to the playoffs this season, but both players should be able to help to push them in the right direction.

Detroit drafted Seider out of Germany with the No. 6 pick overall in 2019. The next year, the Red Wings selected No. 4 overall.

"We talked a lot about the (draft) lottery and not having success, but we've been fortunate and lucky to have these kids come in," Yzerman said.

The duo provides a jolt of talent on a roster that includes a trio of proven scorers in Dylan Larkin, Tyler Bertuzzi and Jakub Vrana.

In what has been a long rebuild in Detroit, the Red Wings have missed six straight playoffs after earning a spot in 25 straight postseasons and winning four Stanley Cup championships.

"We're a long ways from where we want to be, but I think there's some excitement, some optimistim and (Yzerman) feels that," first-year coach Derek Lalonde said.

Yzerman hired Lalonde from Tampa Bay after not renewing Jeff Blashill's contract, parting ways with a coach whose .447 winning percentage was among the NHL's worst over the previous seven seasons.

The 50-year-old Lalonde was on Jon Cooper's staff with the Lightning for four seasons, including one with Yzerman as their general manager, and helped them win two Stanley Cups during three straight trips to the final.

"He believes in what he's preaching, which I think is great walking into a new locker room," Larkin said. "He's made a great impression on the guys."

Since the moment Yzerman returned to Detroit in 2019, he said it was going to take time to turn around the franchise. Over his three offseaons in charge, Deroit didn't do much in free agency.

The Red Wings signed center Andrew Copp to a $28.1 million, five-year contract, defenseman Ben Chiarot to a $19 million, four-year deal and a pair of wings to two-year agreements: David Perron for $9.5 million and Dominik Kubalik for $5 million.

Alex Nedeljkovic, who won 20 of his 52 starts last year in Detroit, and Ville Husso, who won 25 of 38 starts last season in St. Louis, will each have an opportunity to become the team's No. 1 goaltender with starts early in the season.

"That's going to be a healthy competion," Lalonde said. "They'll both get the net early on."

Detroit gave up 3.78 goals per game last season, ranking No. 31 in the 32-team league, and allowed an average of 34 shots to rank among the league's worse in that category.

"The best teams have reduced their goals against," Yzerman said. "If our team can be a harder team to play against and be competitive in games, I hope it translates to points in the standings."

The Red Wings open the season Oct. 14 at home against Montreal and plays at New Jersey the next night, potentially giving them a chance to start strong against two of the seven teams that had fewer points last season.

If Detroit is playing for more than pride at the end of the season, it will have a tough test with the final four games. The Red Wings close by playing Pittsburgh and Dallas at home followed by games against Carolina and Tampa Bay on the road.