Sanders leads No. 7 Oklahoma State past No. 10 Oklahoma 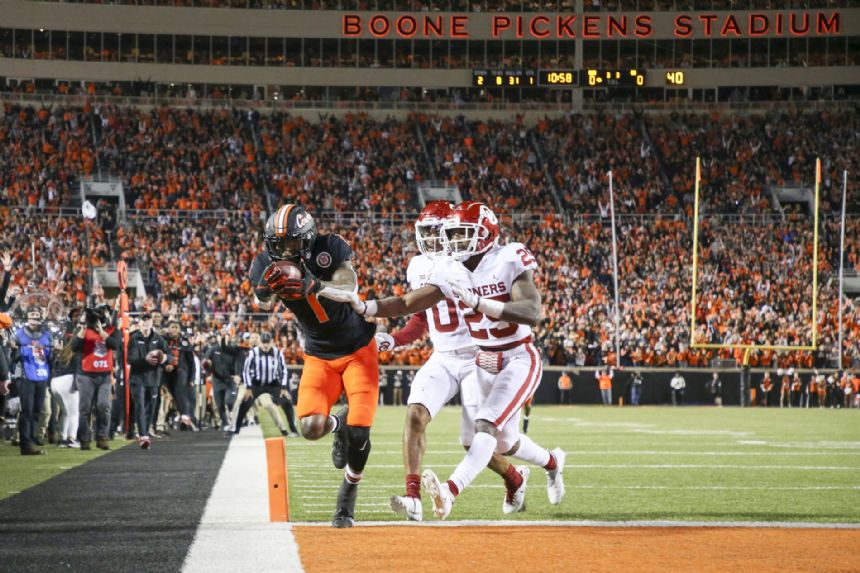 STILLWATER, Okla. (AP) - Spencer Sanders threw for a touchdown and ran for another and No. 7 Oklahoma State beat No. 10 Oklahoma 37-33 on Saturday night to keep alive its College Football Playoff chances and stop the Sooners' streak of Big 12 titles at six.

Oklahoma State (11-1, 8-1, No. 7 CFP) snapped a six-game losing streak to Oklahoma. The Cowboys will play No. 9 Baylor next Saturday for the Big 12 championship.

Oklahoma (10-2, 7-2, No. 10 CFP) got the ball one last time at its 20- with 54 seconds remaining and no timeouts. Caleb Williams scrambled and ran 56 yards to put the Sooners in scoring range. But Oklahoma State's Collin Oliver sacked Williams on fourth down at the Oklahoma State 32 with eight seconds remaining, setting off a wild celebration.

Oklahoma State coach Mike Gundy won for just the third time in 17 tries against Oklahoma. Now, the Cowboys can win their first Big 12 title since 2011.

Oklahoma State already had clinched a spot in the Big 12 title game, but the stakes remained high. With Baylor's victory over Texas Tech earlier Saturday, Oklahoma needed a win to reach the conference championship game, giving Oklahoma State a chance to eliminate its rival.

The game turned when Oklahoma's Eric Gray muffed a punt and Oklahoma State recovered at the Oklahoma 5. Jaylen Warren then punched it in from the 1 to give Oklahoma State a 37-33 lead with 8:54 remaining.

Oklahoma tied it when Williams, backpedaling and under pressure, found Austin Stogner for a 29-yard touchdown pass to tie it. Brennan Presley immediately responded with a 100-yard kickoff return for a touchdown that put the Cowboys back in front.

Late in the second quarter, Oklahoma's Woodi Washington intercepted Sanders' pass and returned it to the Oklahoma State 14. Williams connected with Brayden Willis for a 10-yard score, and the extra point tied itat 24.

Oklahoma struck again after forcing a three-and-out. Presley muffed the punt, and Justin Broiles recovered in the end zone to give the Sooners a 33-24 lead.

Sanders went 37 yards for a touchdown on an option keep, and Oklahoma State cut Oklahoma's lead to 33-31 with 13:52 remaining.

Oklahoma: The Sooners did not score against Oklahoma State's heralded defense in the second half. The Sooners' only points were on the safety and Broiles' fumble.

Oklahoma State: The Cowboys did just enough to get through. They made uncharacteristic mistakes, but got a gritty performance from Sanders, who passed for 214 yards and ran for 93.

Oklahoma State: Will play No. 9 Baylor in the Big 12 title game.