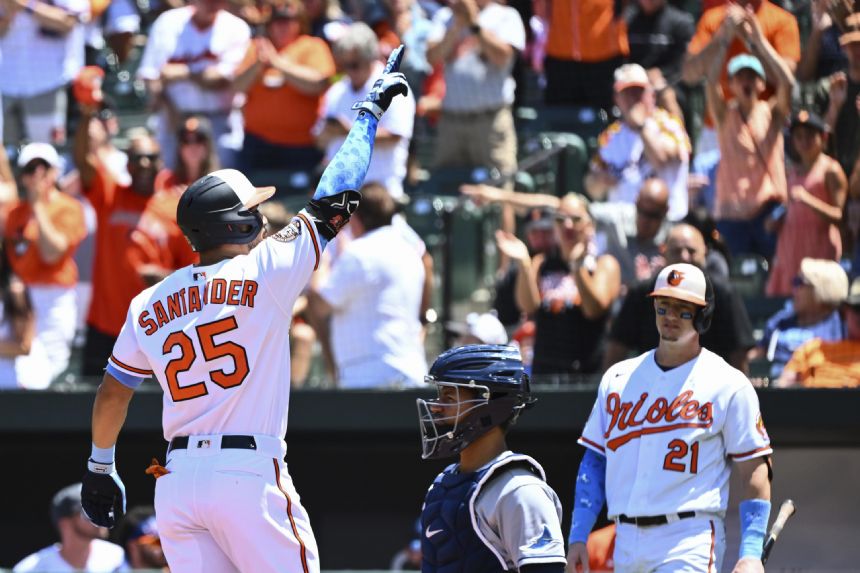 BALTIMORE (AP) - Anthony Santander homered and pointed to his dad sitting in front of the press box as the Baltimore Orioles beat the Tampa Bay Rays 2-1 on Sunday.

Orioles starter Jordan Lyles was scratched Sunday morning because of a stomach virus. As a result, manager Brandon Hyde was forced into a bullpen game.

Austin Voth, claimed by the Orioles off waivers from the Washington Nationals on June 7, made his first start of the season and 23rd of his five-year career. He threw 2 2/3 scoreless innings with four strikeouts.

The Orioles used seven pitchers and Nick Vespi (2-0) picked up the win after holding the Rays without a run over 11/3 innings. Jorge Lopez earned his 11th save by getting the last four outs.

The Orioles increased the lead to 2-0 in the third on a double by Cedric Mullins.

The Rays pulled to within a run in the fourth on a two-out double by Taylor Walls off Bryan Baker.

Kluber allowed two runs and four hits with six strikeouts and one walk over six innings.

Orioles: DH Trey Mancini was held out of the starting lineup with a sore right hand. Mancini was hit by a pitch on Monday against Toronto.

Orioles: Hyde has not named a starter for Tuesday's game against the Nationals, who will start RHP Erick Fedde (4-5, 4.88 ERA).