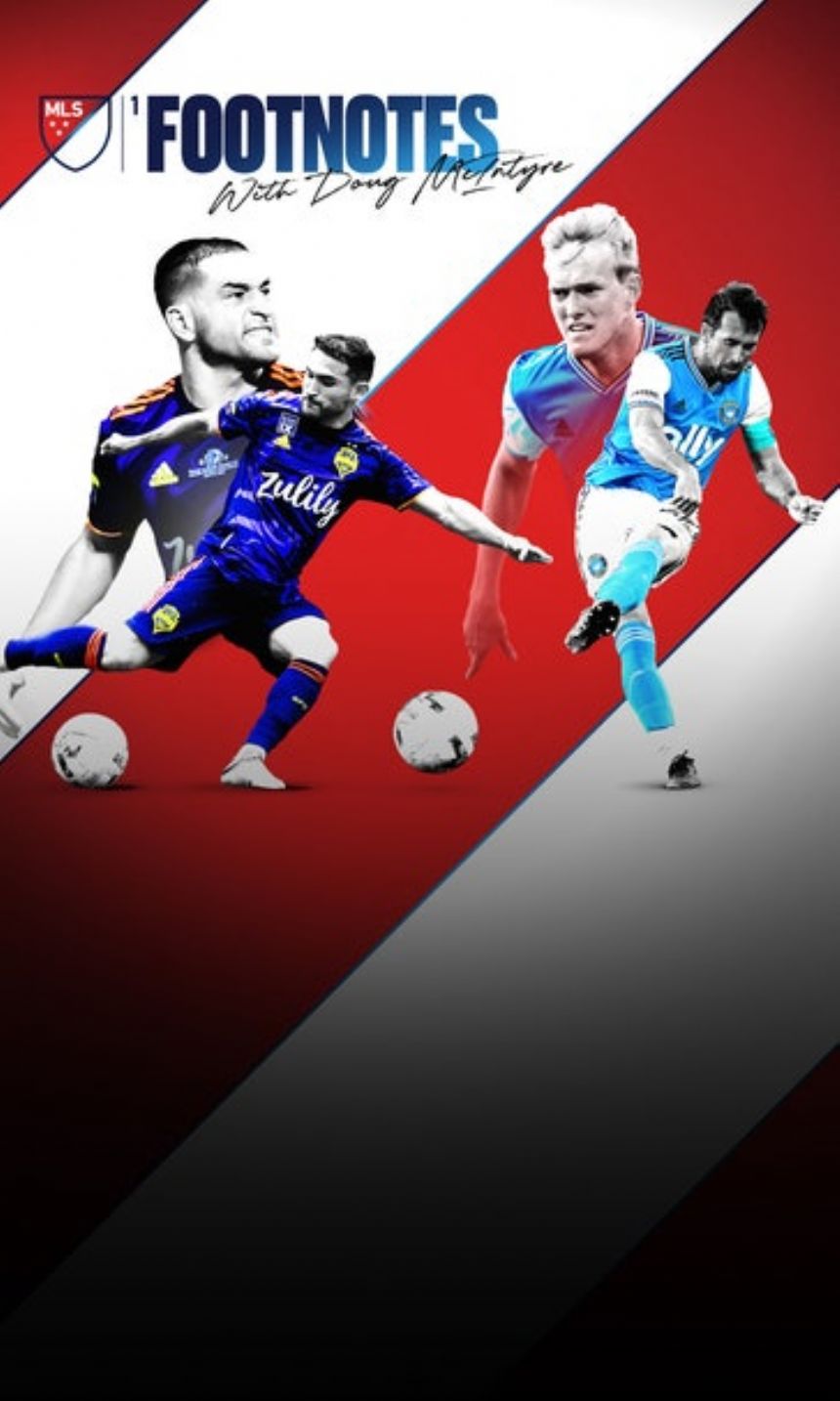 Editor's Note: MLS Footnotes takes you inside the major talking points around the league and across American soccer.

It's almost as if the Seattle Sounders are daring us to doubt them.

With nearly 40% of the 2022 MLS season already played heading into Sunday's match between the recently crowned kings of CONCACAF and expansion club Charlotte FC (9:30 p.m. ET, FS1/AP Deportes/AP Sports app), Seattle sits 23rd overall in the 28-team league and are on pace to miss the playoffs for the first time in their trophy-filled history.

We've seen slow starts from the Sounders before. In 2016, Seattle secured just 20 points from their first 20 games and were in ninth place in the Western Conference before going on a late-season tear that ended with them hoisting the club's first MLS Cup. A year later, the Sounders kicked off the season with a 2W-5L-3T record but again advanced to the final, where they lost the rematch against Toronto FC.

Brian Schmetzer's men have been much better early on over the past few years; they began 2021 with a 13-match unbeaten run but were upset by Real Salt Lake, on penalties, in the first round of the postseason.

The reason for this year's struggles in MLS play is obvious. Seattle rightly prioritized the CONCACAF Champions League, becoming the first team in MLS history to win the tournament when they beat Mexico's Pumas in a two-leg final earlier this month. The Sounders have gone .500 since, including last week's 1-0 defeat in Colorado.

Now comes their best opportunity to climb the table and try to return to MLS Cup for the fifth time in seven seasons. Seattle's next five games are at home. Star performers Nicolas Lodeiro and Raul Ruidiaz will get some much-needed rest when the two-week international break kicks in after the Charlotte game. After Sunday, the Sounders will be idle until a June 14 makeup date with the Vancouver Whitecaps.

"Taking care of home games is going to be really important," Seattle midfielder Cristian Roldan told AP Sports when asked what the club needs to do to keep that playoff streak alive. "I'm confident in our group that we can make a run and get there."

Lodeiro (Uruguay) and Ruidiaz (Peru) weren't summoned by their countries for next month; the only Sounders who'll miss the Vancouver match because of national team commitments are Roldan, U.S. teammate Jordan Morris and Roldan's brother, Alex, who captains El Salvador. The Americans and Salvadorans meet in the CONCACAF Nations League group stage the same night.

Before that, all the focus is on getting three points on Sunday.'

"Charlotte is a low-key, really good team," Roldan said, noting that the newbies are coming off a mid-week U.S. Open Cup loss against the Red Bulls. "It's going to be a tough game, but they are traveling across the country after playing New York on turf. They might be tired, and we have to take it to them early.''

"Hopefully, we have that attitude coming right out of the gates."

Since leaving the Chicago Fire after the 2020 season and moving to CF Montreal, Djordje Mihailovic has established himself as one of the top playmakers in MLS. With seven goals and four assists in just over 1,000 minutes played this season, he's an early candidate for league MVP. His red-hot form was also enough to get him back into the U.S. national team picture for their four pre-World Cup tuneups next month.

Mihailovic scored the first goal under U.S. coach Gregg Berhalter in early 2019 but hasn't been a regular the past three years. Still, with the sport's quadrennial global championship coming up this fall, his timing couldn't be better.

"It's every young kid's dream to play in the World Cup and represent their country," the 23-year-old told AP Sports earlier this week. "I've worked hard for this opportunity to get back in, and now I have to make the most of [it]."

Montreal was the hottest team in MLS two weeks ago, having gone unbeaten in eight games. Then they lost two in a row, at Nashville and at home last weekend against Real Salt Lake. But they got back on track midweek with a 3-0 Canadian Championship win over Forge FC, and will try to carry that momentum into Saturday's contest against a FC Cincinnati team that has won four of its past five.

CF Montreal, which was rebranded from longtime name Montreal Impact before the start of last season much to many longtime fans' chagrin, introduced a new logo on Friday that better recognizes the club's 30-year history. But the club stopped short of reverting to its previous nomenclature, which predated MLS.

It will be interesting to see if supporters embrace the new/old look. Either way, questions must be asked about what type of consumer research has led to three unsuccessful rebrands across MLS over the past three years. Montreal's about-face comes on the heels of similar ones in Chicago and Columbus - all of them driven by fans.

Maybe MLS clubs ought to listen to their diehards. Had it not been for fans in Seattle demanding that their team retain the name Sounders when they jumped to the top tier of American and Canadian pro soccer in 2009, the club would've been dubbed Seattle FC. Instead, the Sounders now boast perhaps the strongest and most authentic brand in MLS.

With FIFA's June international window about to open, MLS will for the most part go dark for two weeks after this weekend. Only a handful of teams will be in action before the league returns with a full schedule in the middle of June: Vancouver plays RSL on June 4, with three more MLS games slated for the weekend of June 11-12.

It's a little surprising that Peru didn't summon Seattle's Ruidiaz for their June 13 World Cup playoff against either Australia or the United Arab Emirates, especially after the veteran striker scored twice in the 3-0 win over Pumas that gave Seattle the CONCACAF title.

Still, Mihailovic isn't the only MLSer whose play in the league so far in 2022 has resulted in a national team invite. Raheem Edwards' excellent form with the L.A. Galaxy got him recalled by Canada this summer. Same for Galaxy teammate/Mexico right back Julian Araujo, who is still trying to force his way into El Tri boss Tata Martino's starting lineup.

Austin FC, Cincinnati and Columbus are the only teams without any callups. Montreal has the most with six.

LAFC have led the Supporters' Shield race almost all year, and after briefly being overtaken by Austin two weeks ago, they're now back in the top spot.

While they lost midweek to the rival Galaxy in the U.S. Open Cup, LAFC are well positioned to get even better this summer, with the club determined to add another designated player, probably an attacker.

LAFC actually have two open DP spots, with only star forward Carlos Vela occupying one of the maximum three roster spots reserved for players who are exempt from the MLS salary cap.

7. Ochoa on the mend

Real Salt Lake goalkeeper David Ochoa was one of the best stories of the playoffs last fall. But 2022 has been a year to forget so far for the 21-year-old Californian. After suffering quad and finger injures, Ochoa was recently granted a leave of absence by coach Pablo Mastroeni before returning to action with RSL's third-tier development affiliate Real Monarchs.

"He's been hampered with all kinds of injuries, and he's got a lot going on in his life on and off the field," RSL coach Pablo Mastroeni said of Ochoa, who is in the final year of his MLS contract and reportedly eager to move to Europe or Liga MX. "I've not walked a day in his shoes, so I try to be empathetic. We thought it was the right thing to give him a game with Real Monarchs. But he's a great kid, he's a fantastic goalkeeper and there's no doubt he'll be back sooner than later."

Whenever he returns, Ochoa might find it hard to get on the field. Zac MacMath has been excellent in his place, and RSL have won three of their past four to move up to fourth in the West.

One of the leading soccer journalists in North America, Doug McIntyre has covered United States men's and women's national teams at multiple FIFA World Cups. Before joining AP Sports in 2021, he was a staff writer with ESPN and Yahoo Sports. Follow him on Twitter @ByDougMcIntyre.