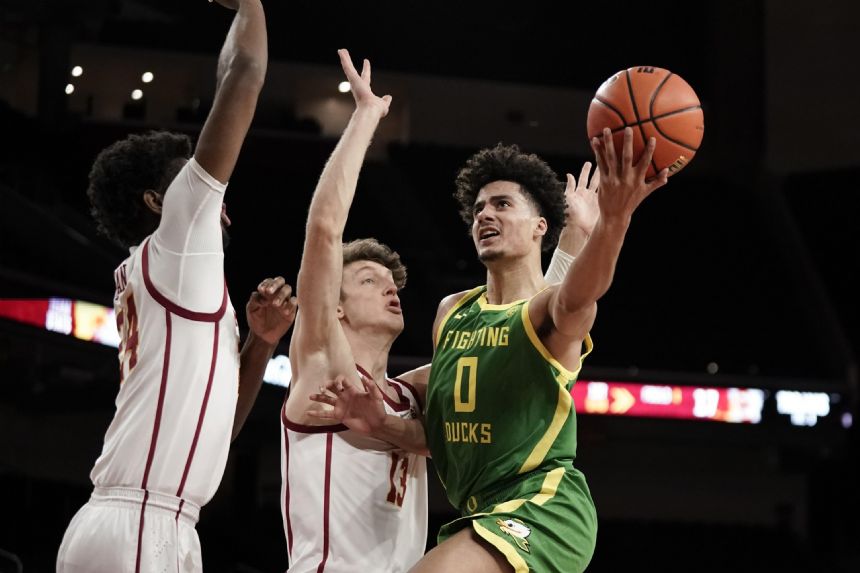 Southern California came into the game fourth nationally in field goal defense, holding opponents to 36.6% shooting. Yet the Ducks hit their first four and nine of their first 13 en route to going 29 of 58 (50%) from the floor.

Boogie Ellis and Isaiah Mobley led the Trojans with 18 points apiece. USC (14-2, 4-2) has dropped two of its last three after opening the season with 13 straight wins.

Richardson had five of Oregon's 10 3-pointers as it shot 10 of 21 from beyond the arc. The Ducks also had a 34-30 advantage in points in the paint, with 14 of their 19 two-point field goals being either dunks or layups.

Oregon took control early when it went on a 13-3 run to take an 18-8 lead five minutes into the game. The Ducks hit three 3-pointers during the spurt, including two by Richardson.

Ellis hit two straight shots from beyond the arc to pull the Trojans within 32-27 with 4:01 remaining before the Ducks closed the half with a 13-2 spurt to take a 45-29 advantage. Richardson had eight points during the late run, and Eric Williams Jr. scored five.

The Ducks extended their lead to 55-37 five minutes into the second half. Chevez Goodwin got the Trojans within nine on a free throw with 4:54 remaining, but they could not draw any closer.

Oregon: The Ducks had a 6-6 record in late December but have regained their stride and could make a bid to jump back into the rankings after a strong performance this week.

USC: The Trojans are likely to drop out of the top 10 after struggling in all three games. They needed a late run in the second half to beat Oregon State on Thursday.

USC: Travels to Colorado on Thursday.