Springboks win 26-10 to pile pressure on All Blacks 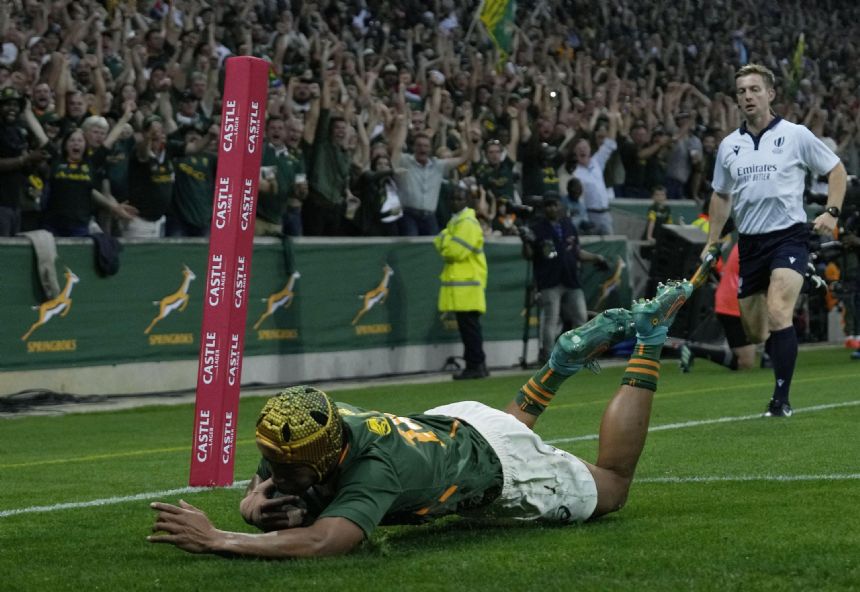 MBOMBELA, South Africa (AP) - South Africa beat New Zealand 26-10 in the Rugby Championship opener on Saturday to pile the pressure on the All Blacks and send them to a fifth loss in six games.

The Springboks scored two tries at Mbombela Stadium, one at the start by wing Kurt-Lee Arendse and one right at the end by replacement Willie le Roux as the All Blacks launched a desperate late attack deep in their own 22 in an attempt to salvage some pride.

The Springboks were in control throughout and had a big territorial advantage to work with, although they finished with 14 men after Arendse was issued a red card - while he was lying flat out receiving medical attention - for a highly dangerous charge in the air on Beauden Barrett.

The Boks led 19-3 and were grinding their way to a big victory when the All Blacks finally broke clear of the home defense in the dying minutes with a bust by wing Caleb Clarke. He was dragged down just short by Damian Willemse but replacement forward Shannon Frizell was on hand to score the All Blacks' only try with two minutes to go.

But Frizell was the man to drop a pass from captain Sam Cane soon after, allowing le Roux to kick ahead and score, and seal the win. Springboks flyhalf Handre Pollard kicked 16 points.

The All Blacks must play a second test in South Africa next week at Ellis Park in Johannesburg and coach Ian Foster's job is hanging by a thread. Rugby's most successful team was already in the midst of its worst run in 24 years after last month's historic home series loss to Ireland and is dangerously close to its worst set of results ever.