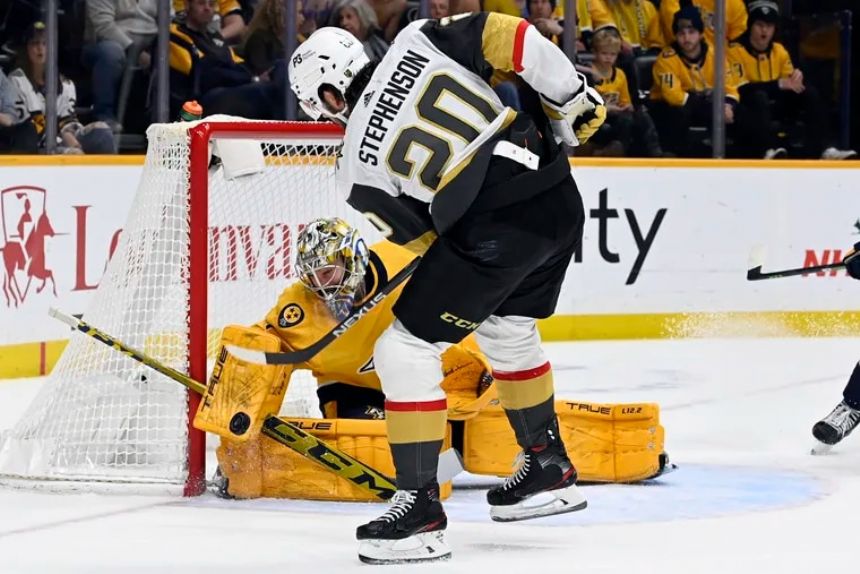 NASHVILLE, Tenn. (AP) - Chandler Stephenson and Mark Stone each had a goal and an assist, and the Vegas Golden Knights beat the Nashville Predators 5-2 Wednesday night.

Stephenson skated low into the slot to beat Saros with a wrist shot low to his stick side for the first goal of the game with 48 seconds left in the first period. Stone assisted on the goal.

At 3:01 of the second period, Vegas extended the lead to 2-0 when Rondbjerg stole the puck in the Predators zone and scored on a breakaway with a wrist shot over Saros' left shoulder.

The Golden Knights scored again at 11:12 of the third when Brooks found Saros out of position to his right side and put a wrist shot from the top of the crease into the open side of the net. Keegan Kolesar and Mattias Janmark assisted.

Nashville found the net at 5:20 of the third period when Forsberg scored on a breakway, beating Lehner with a backhand to his stick side. Matt Duchene assisted.

The Golden Knights extended their lead to 4-1 when Pietrangelo scored a short-handed goal from the right faceoff circle with a wrist shot on a 2-on-1 break with 11:56 remaining.

With 6:09 left, Forsberg struck again beating Lehner high to his glove side a wrist shot from the top of the left faceoff circle.

Forsberg returned after a nine-game absence. He had not played since leaving with an upper-body injury in the third period of a 3-2 overtime victory at Calgary on Nov. 2.

He quickly found his game with two goals in his return. He missed a hat trick as the result of a challenge.

Forsberg appeared to have broken the shutout as he attempted to make a pass that bounced off Ben Hutton and into the Vegas net with 3:57 remaining in the second period. But Vegas challenged the goal and it was disallowed due to goaltender interference by Nashville's Tommy Novak.

THE "PAC" IS BACK

Pacioretty returned from injured reserve after 17 games. He had not played since the second game of the season due to a lower-body fracture sustained against the Los Angeles Kings. He was a game-time decision for Vegas and played on the starting line with Stephenson and Stone. The three linemates combined for five points, with two goals and three assists.

William Carrier also was back in the lineup after being removed from the NHL's COVID protocols.