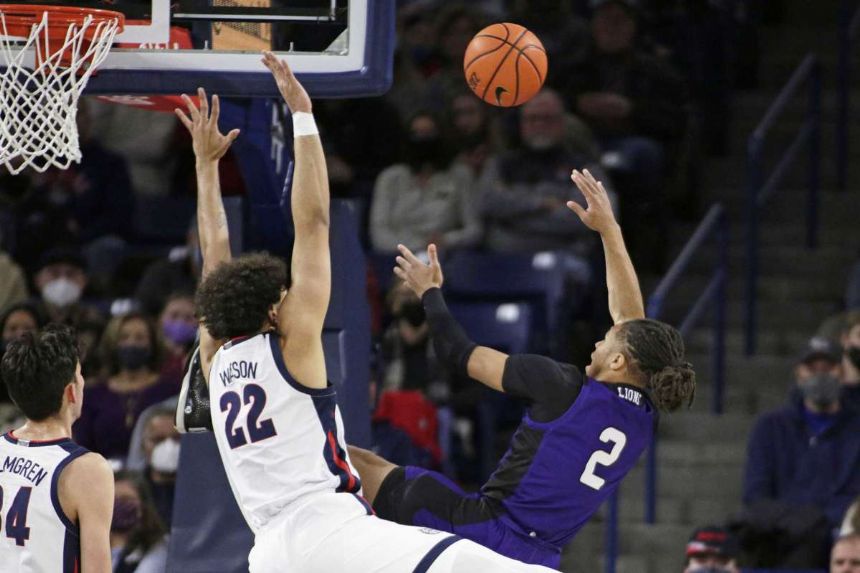 Nolan Hickman scored 13 points, Drew Timme had 12, and Anton Watson had 10 points and 10 rebounds for Gonzaga (11-2), which wrapped up its nonconference schedule.

This one was over early on Tuesday, despite North Alabama trailing 21-16 midway through the first half. After that, the Zags launched an 18-3 run, aided by five Lions turnovers, to take a 39-19 lead. The Lions went six minutes without a field goal at one point.

Gonzaga led 47-25 at halftime, holding North Alabama to 29% shooting in the first half and forcing the Lions into 11 turnovers.

Gonzaga opened the second half with a 19-10 run, getting seven points from Bolton, to build a 66-35 lead. The Lions made one of their 15 field goal attempts for part of the half, and the Zags pushed the lead to 73-40.

North Alabama: This was the highest-ranked opponent the Lions have faced since joining Division I in the 2018-19 season. The Lions won two national titles at the Division II level. ... The Lions lead the ASUN Conference in rebounding with 38.9 per game, and hung with a taller Gonzaga team.

Gonzaga: The Bulldogs had little trouble with the Lions ... They have appeared on the Top 25 for 103 consecutive weeks, which leads the nation. ... The Bulldogs are shooting 63% inside the arc, also tops in the nation.

Gonzaga: The West Coast Conference opener at San Diego on Thursday was postponed because of COVID-19 in the Toreros' program. Gonzaga is scheduled to play at Loyola Marymount on Saturday.