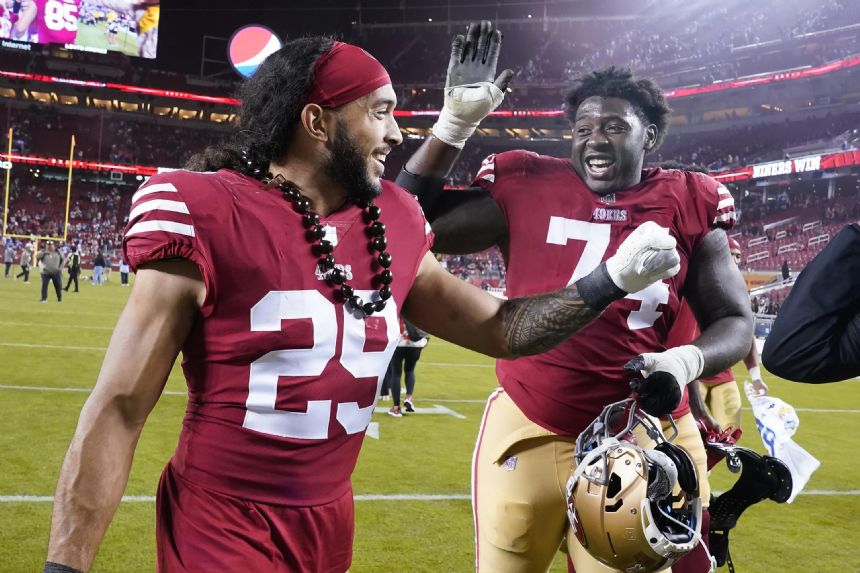 TEMPE, Ariz. (AP) - In the mediocre NFC West, the San Francisco 49ers look like a team ready to make a charge up the standings.

As for the Arizona Cardinals? Well, at least there's still hope.

The 49ers and Cardinals meet in Mexico City on Monday night in a showdown between division rivals. It's also a rematch of the first regular-season NFL game played in another country: The Cardinals beat the 49ers 31-14 at Estadio Azteca in 2005 in front of more than 100,000 fans.

San Francisco (5-4) is trying for its third straight win and has one of the best defenses in the league. The offense isn't quite as impressive, though it's stabilized under veteran quarterback Jimmy Garoppolo and recently acquired running back Christian McCaffery, who the Niners added a few weeks ago in a trade with the Panthers.

The Cardinals (4-6) got a badly needed 27-17 win over the Rams last weekend with backup quarterback Colt McCoy under center. Starter Kyler Murray missed the game because of a sore hamstring. Murray hopes to be available Monday for a game that's crucial for staying in the playoff race.

"That's the one thing is just staying alive and staying in the fight," Murray said. "It's not over. Obviously, the season has not gone the way we've wanted, but we're still in it. The season's not over. We know this team's talented enough to go on the run that we feel like we can go on.

"That's the mission and that's the mentality right now."

Arizona coach Kliff Kingsbury and San Francisco coach Kyle Shanahan said they're both excited about going to Mexico City for the game. The NFL is playing five international games this season, but this is the only one not in Europe.

Shanahan said the 49ers' fanbase in Mexico makes the country like a "second home." Kingsbury expects plenty of support for the Cardinals as well.

"I've heard it's going to be an incredible atmosphere," Kingsbury said. "I'm sure a lot of our players have never been to Mexico City or experienced anything like this. To play in that stadium - just a legendary soccer stadium and so many cool events that have been there and games - it'll be awesome."

The 49ers spent the week at the Air Force Academy in Colorado Springs, Colorado, practicing for the game in hopes that spending more time in high altitude would help prepare them for the game in Mexico City, which is at about 7,200 feet elevation.

The team arrived in Colorado on Tuesday and practiced through Saturday before heading to Mexico on Sunday.

"You want to practice in that altitude because the more days you spend in it, the more your body gets used to it, so hopefully it'll make it easier for us Monday night," Shanahan said.

The Cardinals opted to stay at their home facility in Tempe, Ariz., instead of training at altitude.

Kingsbury said he considered taking the team to somewhere like Flagstaff, Ariz., which sits around 7,000 feet elevation, but that the team's strength and conditioning coach Buddy Morris believed he could get the team ready without an extra trip.

"Yeah, we looked at all options," Kingsbury said. "Buddy does a tremendous job with all those things. He did all sorts of research on it, and we felt like the program we could set up here for all the altitude training was really good and wouldn't disrupt our routine, so they've been at it for the last two or three weeks."

The 49ers had little problem moving the ball last week against the Chargers but struggled to finish drives. They got into the red zone five times, but turned those trips into only two TDs. A dropped pass by Brandon Aiyuk and a couple of blown blocks on run plays contributed to the problems.

If Murray is unable to play, the Cardinals are more than comfortable with using veteran backup McCoy.

The 36-year-old quarterback has a 3-1 record in spot starts over the past two seasons, filling in admirably when Murray has been injured. McCoy completed 26 of 37 passes for 238 yards and a touchdown against the Rams.

McCoy is dealing with his own injury issues - he hurt his knee against the Rams and briefly left before returning. Kingsbury said McCoy's resilence is one of many reasons he's a quality backup option.

"He got hurt, he stepped back in and just was the same guy," Kingsbury said. "He didn't get fazed by any of it. That's kind of his biggest quarterback trait that I've been impressed by. He doesn't get rattled and he just plays his game, sticks to his guns and trusts what he can do out there."