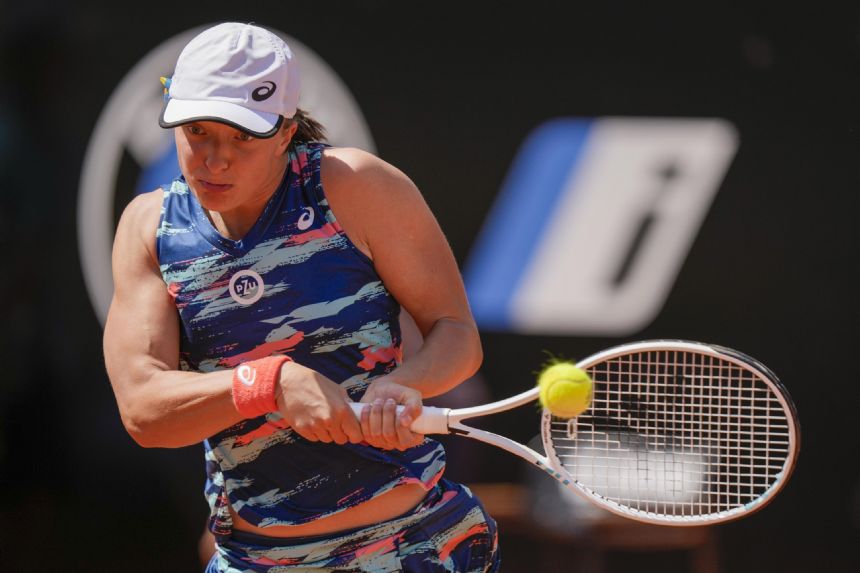 ROME (AP) - Top-ranked Iga Swiatek was tested before pulling out a 6-4, 6-1 victory over former No. 1 Victoria Azarenka to reach the Italian Open quarterfinals on Thursday and extend her winning streak to 25 matches.

The defending champion in Rome, Swiatek is attempting to win her fifth straight tournament.

The last player to win more consecutive matches was Serena Williams, who had a streak of 27 in a row over 2014 and 2015.

Swiatek's run makes her a favorite to win a second French Open when the year's second Grand Slam gets underway in 10 days.

In a sign of how challenging it was for Swiatek to hold serve on the red clay court at the Foro Italico, she played more than twice as many points with her serve than Azarenka did - 98 to 47.

Azarenka got rattled when a spectator entered the front row of the mostly empty VIP section just behind her as she was facing a break point late in the first set. When she then double-faulted to hand Swiatek control of the set, she slammed her racket in frustration and complained to the chair umpire about the mid-game interruption.

In the men's tournament, Stefanos Tsitsipas rallied past Karen Khachanov 4-6, 6-0, 6-3 for a tour-leading 29th win of the year.

Zverev, who is still seeking his first title of the year, has his father and coach, Alexander, back on the circuit with him after a prolonged absence for reasons the family has kept personal.

When Zverev won the ATP Finals in November, his older brother and fellow pro, Mischa, was coaching him.

"I was missing a coach for six months. That's what was missing," Zverev said. "That's why I took Sergi Bruguera on - because we didn't quite know how long it would take my father to be back.

"I'm very happy for him to be back here. It gives me a certain calmness, a certain confidence as well, because he's been there from the beginning of my career. I think nobody knows me better on the court than he does."