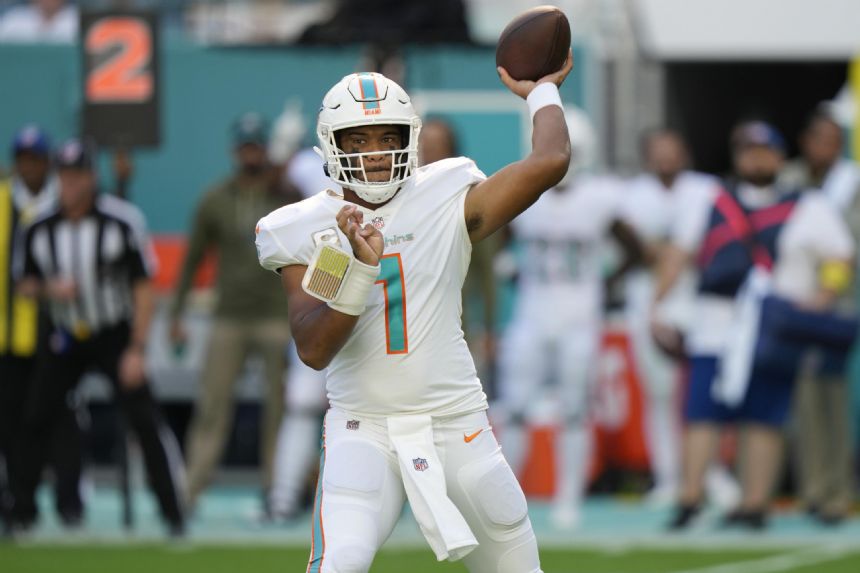 TURNOVER DIFFERENTIAL: Texans minus-2; Dolphins minus-2

TEXANS PLAYER TO WATCH: RB Dameon Pierce looks to bounce back after managing a career-low 8 yards rushing on 10 carries last week. The fourth-round pick leads all rookies with 780 yards rushing and 915 scrimmage yards. If he gets 85 yards of offense against the Dolphins, he will be the third rookie in franchise history to reach 1,000 scrimmage yards.

DOLPHINS PLAYER TO WATCH: WR Jaylen Waddle finished the Cleveland game with the fewest yards receiving (66) he's had since Week 5 against the Jets. That low output was more about key contributions from other Dolphins receivers than anything. Waddle had eight catches for 83 yards when Miami faced the Texans last year, and he hasn't had two consecutive games with fewer than 80 yards receiving since Oct. 9.

KEY MATCHUP: Dolphins run game vs Texans rushing defense. Houston has one of the worst rushing defenses in the league, allowing 178.9 yards per game. The Texans have allowed the most rushing yards of any NFL team this season and have given up 14 rushing touchdowns. The Dolphins run game has improved since they added Jeff Wilson Jr. at the trade deadline. Miami rushed for a season-high 195 yards against the Browns in Week 10.

KEY INJURIES: Miami is relatively healthy coming out of its bye week. The status of cornerback Keion Crossen, who injured his shoulder against Cleveland, is "up in the air," according to coach Mike McDaniel. ... Right tackle Austin Jackson (ankle/calf) could return soon. ... Houston cornerback Derek Stingley, the third overall pick in the draft, is likely to miss his second straight game with a hamstring injury.

SERIES NOTES: Both of Miami's wins against Houston - in 2015 and 2021 - happened at home. ... Tyrod Taylor was Houston's starting quarterback and Jacoby Brissett was Miami's. Both players are on different teams this year.

STATS AND STUFF: Miami is 19-14 all time immediately following the bye week. ... A win Sunday would give the Dolphins their third straight season with a five-game winning streak. ... Since QB Tua Tagovailoa returned in Week 7, Miami is second in total offense (429.5), second in yards per play (6.98), second in passing offense (307), first in yards per attempt (9.16) and first in sacks allowed per attempt (2.2). ... Miami is the only NFL team with two of the top 10 leading receivers in Tyreek Hill and Jaylen Waddle. ... Miami's defense was allowing opponents to gain 7.51 yards per pass attempt through the first six weeks of the season, which ranked 28th. Since Week 7, the Dolphins are allowing 5.96 yards per pass attempt, which is ninth. ... Hill has 16 catches for 202 yards and three touchdowns in four games against Houston. ... Waddle has at least 65 receiving yards in five straight games. ... The Texans had a franchise-low 5 net yards of offense in the first half last week. ... QB Davis Mills threw two interceptions last week and has seven in Houston's five-game skid. ... WR Brandin Cooks led the team with 70 yards receiving last week. He needs 39 yards receiving for his ninth straight season with at least 500 yards. ... WR Nico Collins has had at least five receptions in his past two games. ... Defensive lineman Jerry Hughes has three sacks and four tackles for losses in his past four road games. ... Linebacker Christian Kirksey has five or more tackles in each of Houston's 10 games this season. ... Rookie linebacker Christian Harris has four straight games with at least five tackles. ... Defensive back Jonathan Owens had 10 tackles last week for his seventh game this season with 10 or more stops. ... Safety Jalen Pitre ranks second among rookie defensive backs with 69 tackles. ... Defensive back Steven Nelson recovered a fumble in his previous game against Miami in 2019 with Pittsburgh. ... Defensive back Desmond King tied his career high with 10 tackles last week.

FANTASY TIP: Hill has caught at least five passes in all but one of his games this season. He has more receptions (81), yards (1148) and catches of at least 20 yards than any other NFL receiver this season.