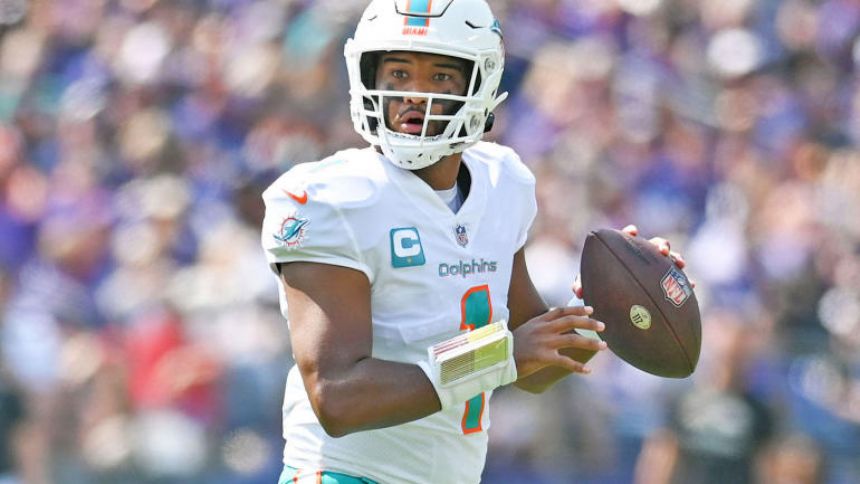 Tua Tagovailoa has certainly received his fair share of criticism throughout his young NFL career, even though the Miami Dolphins quarterback has done everything possible to silence the doubters through the first two weeks of the season. Tagovailoa has evolved into one of the game's best passers in the early going, a revamped quarterback thanks to having an offensive-minded head coach (Mike McDaniel) and two of the game's top playmakers in Tyreek Hill and Jaylen Waddle.'

The results are showcasing Tagovailoa is the franchise quarterback of the Dolphins, becoming one of the league's most prolific passers through two games. While it may be a small sample size, Tagovailoa continues to show the progression as a quarterback that has put him in the conversation with Joe Burrow and Justin Herbert -- the other quarterbacks that were taken in the top-10 picks of the 2020 NFL Draft.'

In this week's "By The Numbers," let's take a look at Tagovailoa's ranks amongst the NFL's passing leaders so far this season and how his breakout performance Sunday entered the Dolphins record books.'

In the four major passing categories, Tagovailoa ranks in the top six in all of them -- with the lowest shockingly being his completion percentage. Tagovailoa is the only quarterback with 700 yards through two weeks and tied with Allen, Mahomes, and Wentz for the lead in passing touchdowns -- pretty good company.'

Tagovailoa isn't just connecting on short passes either. He leads the NFL on passes that have went 10-plus air yards (434) and is tied for the league lead in completions (18) and passing touchdowns (5) on passes that have traveled 10-plus air yards. He's third in the league in yards per attempt (8.9) and fifth in the NFL in touchdowns per pass attempt (8.4). Tagovailoa has thrown for a first down on 42.2% of his pass attempts, trailing only Mahomes in that category.'

Bottom line, Tagovailoa is one of the league's best quarterbacks in the early going. His comeback in Sunday's win over the Baltimore Ravens put the league on notice.'

Most completions in game -- Dolphins history

Tagovailoa's performance was one of the best games ever for a quarterback in the Dolphins storied franchise. Only Marino has more completions and passing yards in a game than Tagovailoa, who became the third quarterback to throw six touchdown passes in a game for the organization -- joining Griese and Marino (who are arguably the two best quarterbacks to ever play for the franchise).'

Five of Tagovailoa's six touchdowns came in the second half, four of which came in the fourth quarter. He joined Joe Montana as the only quarterbacks in NFL history to throw four touchdown passes in a game on the road -- and only the fifth quarterback in league history to accomplish the feat.'

The Dolphins were down 21 points in the fourth and came back to win, which was the largest comeback in franchise history. Tagovailoa finished 13 of 17 for 199 yards with four touchdowns and no interceptions in the fourth quarter for a 154.2 rating -- notching Miami's first win in M&T Bank Stadium and the Dolphins' first win in Baltimore since 1997. '

The performance was historic for Tagovailoa, who has continued to prove he can win games for the Dolphins since becoming the starting quarterback. Looking at Tagovailoa's first 23 starts, his criticisms have been over exaggerated.'

Tagovailoa has always had a high completion rate, despite not being able to throw the ball downfield as a result of a poor offensive line in his first two years in the league. Despite having just 27 touchdown passes, Tagovailoa is fifth in NFL history in completion percentage (66.2%) after a player's first two seasons (minimum 500 attempts). This is with three offensive coordinators in his first two seasons in the league, with the Dolphins going through numerous trade rumors involving Tagovailoa's status as the team's starting quarterback.'

The Dolphins have finally showed faith in Tagovailoa by developing an offense around him and giving him a fair shot to become the franchise quarterback. That decision has paid off, even with the small sample size.'