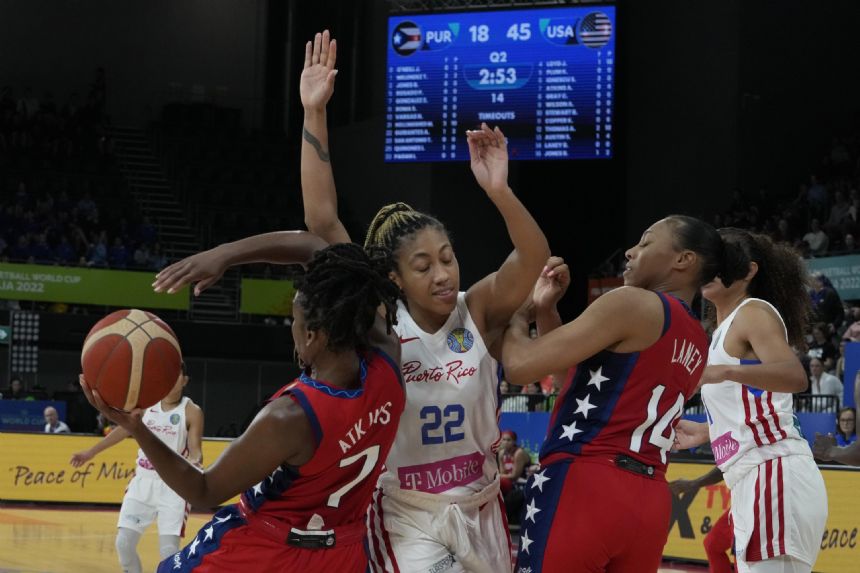 Alyssa Thomas added 11 points and six steals for the Americans (2-0), who forced Puerto Rico into 21 turnovers.

The U.S. jumped out to a 27-11 lead after one quarter as Thomas had 10 points and five steals in the opening 10 minutes. The Americans contested nearly every shot Puerto Rico took and forced nine turnovers. The U.S. kept the pressure on in the second, holding Puerto Rico without a point for nearly the first five minutes of the period.

Mya Holingshed finally ended the drought, making a contested 3-pointer that made it 40-17. The Americans led 54-21 at the half. There was little drama in the second half as the U.S. kept extending its lead.

The Americans contained guard Arella Guirantes, who had 26 points, nine rebounds and eight assists in Puerto Rico's opening win over Bosnia and Herzegovina. She was held to seven points on 2-of-12 shooting. The U.S. threw four or five different defenders at her, starting with Kahleah Copper.

The U.S. now has won 24 consecutive World Cup games since losing in the 2006 semifinals to Russia. The Americans are two wins short of matching their record 26-game run from 1998-2006.

Puerto Rico (1-1) was coming off its first-ever World Cup win. Hollingshed, who played for Colorado in college, finished with 10 points.

Chelsea Gray and Kelsey Plum landed in Sydney after celebrating the Las Vegas Aces' first WNBA championship with a parade on Tuesday. They sat on the U.S. bench and cheered on their teammates. A'ja Wilson, the third member of the championship team, was expected to land in Sydney later Friday.

As good as the U.S. defense was, it wasn't the lowest scoring total by an American opponent. Argentina had 22 points in 1953. ... The Americans also fell short of the margin-of-victory record held by the 2014 team that beat Angola 119-44. ... Thomas also fell one short of the U.S. record for steals in a game set by Cheryl Miller in 1986. Tamika Catchings had six against Russia in 2002. Olga Gomez of Cuba holds the World Cup record of 10 against France in 1994.