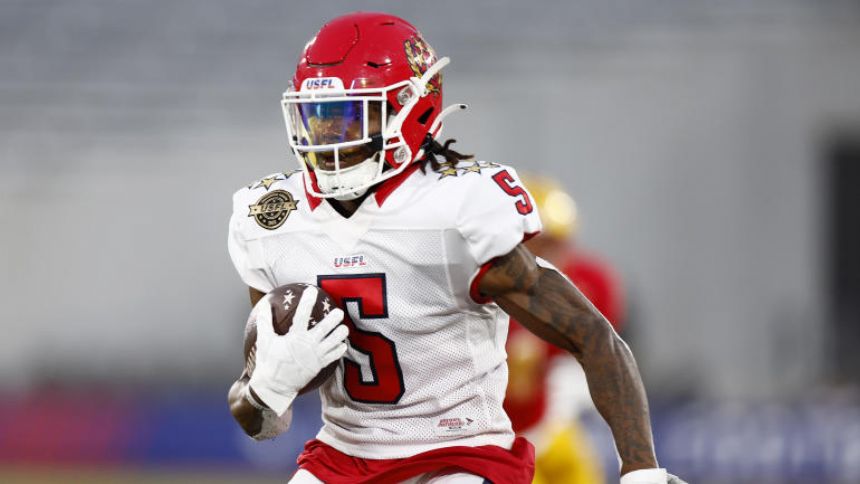 KaVontae Turpin, the Generals' playmaking receiver and return extraordinaire, won the USFL's first league MVP award. Turpin's teammate, running back Darius Victor, was tabbed as the league's Offensive Player of the Year. Houston Gamblers defensive end Chris Odom was named Defensive Player of the Year, while Generals coach Mike Riley was named Coach of the Year. Each award was voted on by the league's eight head coaches.'

"I didn't think anybody really ran away with anything," said Daryl Johnston, the league's executive vice president of football operations. "I'd love to see the voting on all the awards because I thought they would be tight."

The 25-year-old Turpin lead the USFL in receiving yardage (540) while helping the Generals boast the league's top-ranked offense. Turpin also recorded the first punt return for a score in USFL history.'

"I've always felt that a returner was a key element to have for your team," Johnston said. "None of our quarterbacks really took the lead on the potential to be an MVP candidate. I was actually very impressed by the voting there. It went to KaVontae, and I thought he did a heck of a job."

New Jersey also benefitted by having Victor in the backfield. A former NFL and XFL player, Victor led the USFL in rushing touchdowns with nine during the regular season. His presence helped New Jersey average a league-high 160.6 rushing yards per game.'

"I thought he was great for for New Jersey," Johnston said of Victor, whose quote, "Thick thighs save lives" quickly went viral. "Mike Riley kind of brought him in as a red zone goal line runner, and obviously he was much more than that. I think the big thing with what New Jersey did, especially early in the season, they evolved their quarterback position with the De'Andre (Johnson) and Luis (Perez), and the running game carried it and that was mainly Darius. I thought it was very deserving."'

#DYK Former @CAAFootball star Darius Victor, who rushed for more than 3K yards in a @Towson_FB uniform, has scored a TD in four straight #USFL games - all wins for @USFLGenerals ??

The league's leader with 12.5 sacks, Odom also blocked three kicks that included a field goal attempt that led to the game-clinching score in last weekend's win over the Breakers. His play helped the Gamblers end the year with a two-game winning streak.'

"He just got better and better, and I think the Gamblers' defense really kind of fed off of him," Johnston said of Odom, who had a pair of sacks for Washington during the 2019 NFL season. "As the season went on, I thought he became more than just an edge rusher. I thought he played the run really well. The defense kind of went the way that Chris' season went. They were playing their best at the end of the year. I thought Chris was playing his best at the end of the year."'

Riley, a longtime coach in both the college and pro ranks, guided New Jersey to a 9-1 record and North Division title. An innovative offensive mind, Riley's Generals paced the league in total yards gained as well as in third-down efficiency.'

"As the season started, there was a lot of uncertainty at the quarterback position," Johnston said of the Generals. "The way that he navigated that; they played a certain style and never really deviated from it. He never panics. We had Birmingham go undefeated through the season's first eight weeks, but Mike and the Generals have won nine in a row now, and the (Coach of the Year) vote was almost unanimous. I think that that says a lot."'

Riley's team will put its winning streak on the line against the Philadelphia Stars, a team New Jersey defeated twice during the regular season. The Stallions, who like the Generals finished the season with a 9-1 record, will face the New Orleans Breakers in the second game of Saturday's doubleheader. Both games will take place inside Tom Benson's Hall of Fame Stadium in Canton, Ohio.'

"I don't think you could have scripted something better for Year 1," Johnston said. "Very, very competitive games all season long, then to finish the regular season and go to Canton for the playoffs. That's like a fairy tale. I'm thrilled, and I know there's a lot of guys that are going to be there this weekend that have never been. It's one of the things that we wanted to do as a league is to make sure they got to experience the Hall of Fame. See the guys who've come before them who built this game, sacrificed a lot so they can have what they have today."'

As far as the games are concerned, Johnston is anticipating two exciting, tightly contested contests. In the game pitting the Generals against the Stars, Johnston believes that the outcome could come down to how much success Victor and New York's running game can have against Philadelphia's stout defensive front. For Saturday's nightcap, Johnston feels that the Breakers are capable of upsetting the Stallions after coming up just short in both of their regular-season meetings.'

While he doesn't have a rooting interest, Johnston wouldn't mind seeing a USFL Championship between the Stallions and Generals, the two teams that kicked things off during the league's inaugural game on April 16.'

"I would love that," Johnston said of Stallions-Generals title game. "It's kind of a storybook thing. We've had some really unique situations this year. It's been a lot of fun, and I think that that would be pretty cool. The way you started the season as the same way you finished it."