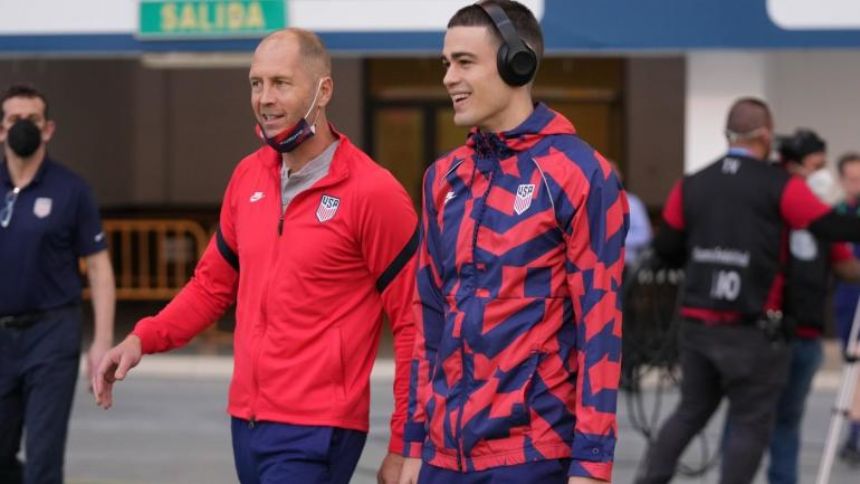 On Friday the United States men's national team will 'in a vital international friendly. The Asian nation will offer a stout test for Gregg Berhalter's men as they look to get ready for the World Cup in Qatar in November. While injuries are a concern for Berhalter with Zack Steffen, Tim Weah, Antonee Robinson, Chris Richards, Yunus Musah, and Cameron Carter Vickers all missing, it's a good reminder that the team likely won't have their best 26 available for the World Cup either.'

Ahead of the match, here's how to watch and three important questions:

As Japan get ready for their seventh straight World Cup, what is there to watch for?

Who replaces Yunus Musah in midfield?

One of the biggest questions surrounding the team is how Behalter will set up his midfield. In his pre-match media availability, when asked who would replace Musah, Berhalter almost named his entire midfield.'

"This gives an opportunity for guys like Luca [de la Torre], for guys like Kellyn [Acosta], for guys like Johnny Cardoso -- who we know is a really good player," Berhalter said. "So I think those three can fill in admirably. And then we also have Malik Tillman or perhaps Gio Reyna who can fill in the midfield position. So just depending on what kind of look we want.

Berhalter was asked about Brenden Aaronson who filled in for Weston McKennie during the summer window and he clarified that Aaronson can fit in as well. What's interesting from his responses is that based on what the depth chart was during qualifiers, de la Torre should be the person who gets the nod as he can bring similar skills when it comes to ball progression. But only having played 11 minutes since moving to Celta Vigo, fitness is certainly a question at this time. Berhalter's late call-up of Cardoso could also see him get extended minutes, coming in after quality performances for Internacional. Only 20, Cardoso could see a late stock rise that sees him on the plane to Qatar similarly to the one that Tillman is currently on.'

Japan will be a tough team to unlock so it makes sense for Berhalter to go with a more creative option and Cardoso has played as a holding mid or a shuttler depending on the need. With three goals and two assists this season, he can bring a dynamic presence to Berhalter's midfield three without the need to change the positions of Tyler Adams and McKennie.

Matt Turner will start, but can he take control?

Berhalter confirmed that Matt Turner will start the game which is a' with Steffen not in the squad. While Berhalter said that Steffen missed the squad due to injury, he did start Middlesbrough's most recent game which was a 0-0 draw with Rotherham. While I don't want to read between the lines and say that Steffen has lost the number one shirt, a strong performance from Turner will certainly put him in a great spot.'

Boasting strong attackers like Daichi Kamada, Takefusa Kubo, Kyogo Furuhashi, Takumi Minamino, and Daizen Maeda, Japan are a squad that will test the United States defense. Turner will also be playing behind a backline that doesn't have his regular left-back, and there's a chance for later in the match after Walker Zimmerman and Aaron Long start. Add in Sergino Dest's lack of playing time between Barcelona and AC Milan, and it's likely that Turner will need to make quite a few saves to keep Japan from scoring, but he will also have chances to start the team on the break while showing off his improved distribution as well.

How will the forwards perform?

While the largest story out of the camp has been about Jordan Pefok's absence from it, it's up to Josh Sargent, Jesus Ferreira, and Ricardo Pepi to show why they deserve to be there over him. A lot has been made about how the forwards that he called are similar but Berhalter wanted to put that to bed.

"They have similar profiles but I wouldn't say they're the same. I don't think that you can compare Pepi or Sargent in the air to Jesus. I don't think that you can compare Jesus' playmaking ability to Pepi," he said. "I think they are different, they have some similar attributes but when you're talking about profiles, I think they each give us something different. It may be subtle differences but they are different. When you're talking about a guy like Jordan [Pefok], he's a completely different profile which could be useful as well. I don't ever want to insinuate that they wouldn't be helpful to us potentially, so we're just evaluating.

Berhalter says he has a lot of information on Pefok and will continue to monitor him, but he's excited to see Sargent and Pepi back in the squad. Strong performances could show why Berhalter made the decision that he did, but if they're not able to put the ball in the net, the calls for Pefok will grow stronger. The collection of nines is a big decision for Berhalter as it could make or break his chances at the World Cup. Sargent has come a long way at Norwich City this season, but leaving out a Budesliga leading forward who has done nothing but score for his clubs over the past calendar year for Pepi, who just scored his first goal in almost a year last season, is quite a choice. The players will need to back that their coach made the right choice although there's still time to include Pefok on the plane to Qatar if needed.