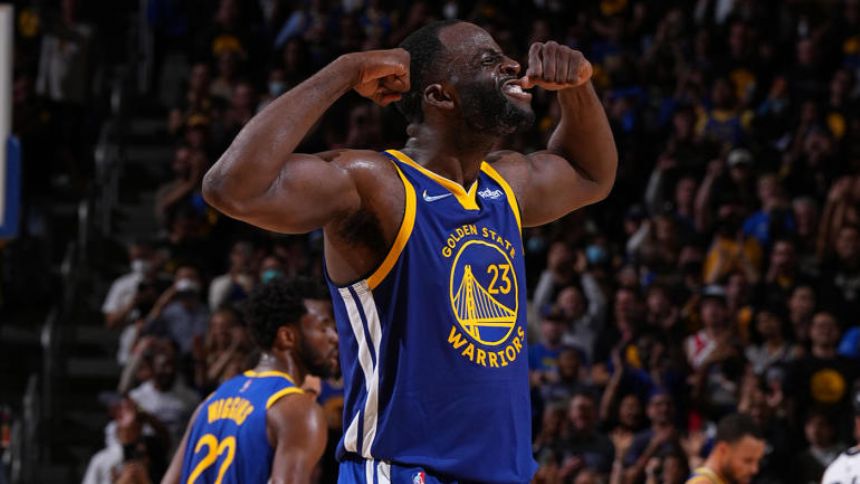 -- Mike Brown concerningly glanced at Kevon Looney, one of his soldiers from the past six seasons who has done everything asked of him with little to no fanfare on a Golden State Warriors franchise rife with highlights and glory. Looney, who rarely plays in stretches longer than six or seven minutes, was heading toward his 17th straight minute on the floor, on his way to a career-high 35 for the game.

Looney not only survived, but thrived, in the final quarter of Friday night's 110-96 Game 6 win over the Memphis Grizzlies, and he symbolized the theme of the game while sending the Warriors back to the Western Conference finals for the first time since 2019.

Just before the final buzzer, Mike Brown walked down the line of fellow assistant coaches along the sideline. He hugged Kenny Atkinson. He hugged Bruce Fraser. He hugged Chris DeMarco.

Serving as head coach with Steve Kerr out due to health and safety protocols, Brown -- recently named as the next head coach of the Sacramento Kings -- had been caught in the crosshairs of the NBA Twitterati just 48 hours earlier, when the Warriors received a mortifying Game 5 drubbing at the hands of the Grizzlies the likes of which we rarely see in the NBA playoffs.

By the end of Game 6, however, the Warriors had prevailed over the pesky, young, fearless, relentless Grizzlies, and a key adjustment from Brown, the coaching staff, and even the players, was a large reason why.

The majority of the talk during and immediately following the Warriors' first-round win over the Denver Nuggets was the novel version of the famed Warriors small-ball lineup. Stephen Curry, Jordan Poole, Klay Thompson, Andrew Wiggins and Draymond Green seemed unbeatable in their brief stints together, leading many to suggest that the unit should start for the rest of the playoffs, or at the very least receive a larger chunk of minutes.

Against the Grizzlies, however, the lineup failed. Again and again. When star Grizzlies guard Ja Morant was injured in Game 3 and Memphis started man-mountain Steven Adams in Games 4 and 5, the Warriors' offense looked as futile as it has all season. The small-ball lineup that was supposed to overwhelm defenses and raise Golden State's championship hopes had mustered a meager 94.5 points per 100 possessions in 25 minutes during the series.

"When Ja went down, we realized really after [Game 5], we have to almost adjust as if we're starting an entirely different series," Green said. "Because that was a totally different team we played against the last three games."

So the Warriors had a decision to make for Game 6. Do we go small and hope to take advantage of Adams' lack of footspeed, or do we try to match their size and go big? A few minutes before tipoff, the starting lineups were announced, and Looney was chosen to match up with Adams.

Turns out it was a collective decision stemming from a conversation that started toward the end of that horrific blowout in Memphis on Wednesday. Brown talked it over with Curry and Green, who both agreed that Looney was the guy they wanted next to them. Not only does he bring size and physicality, but he's also one of the core players remaining from the Warriors' Finals runs. Kerr, who could be Looney's biggest fan in the world outside of his family, ultimately signed off on the decision.

"When you look at the last eight quarters prior to this game, we got dominated for seven of them," Green said of the choice to start Looney in Game 6. "We just knew we needed to come out and establish an inside presence to start the game off, and not worry so much about our scoring. ... They made it clear that they were gonna beat us up, and they were doing a good job of it. Inserting Loon back into the starting lineup changed that."

For the third straight game, the Warriors' offense struggled for most of the night. Thompson had several flourishes en route to a team-high 30 points, but Curry and Poole couldn't throw the ball into the ocean for the better part of the first three quarters. On top of the shooting struggles, the Warriors fell into their notorious habit of throwing the ball to the other team or out of bounds, leading to 16 turnovers over the first three quarters.

So how did they stay alive, particularly when Grizzlies wing Dillon Brooks -- public enemy No. 1 at Chase Center -- was having arguably the best game of his life? The Warriors got big.

Looney was a menace from the jump, collecting 11 rebounds in the first quarter alone and finishing with an absurd 22 boards on the night, half of which came on the offensive glass. He also helped nullify Adams, who had just one offensive rebound for the game. The Warriors beat the Grizzlies on points in the paint, an area where Memphis has dominated all season.

It wasn't just Looney who got the message, either. Green had 15 rebounds. Wiggins had 11. Thompson had eight. Curry pulled down seven. All told, the Warriors gathered a monumental 70 rebounds, including 25 on the offensive glass. For a game that was ugly offensively for the majority of the night, the Warriors' grit and determination on defense and on the boards powered them to the conference finals.

"When we win the rebound game and the possession game, we give ourselves a chance to win the game," Brown said. "That is remarkable against a team of that size and that athleticism."

Brown was right. Eventually, the offense came in the form of 11 fourth-quarter points from Curry and 10 more from Wiggins. Thompson's eighth 3-pointer with just under three minutes left sealed the game, and the series.

We can argue all day about whether what the Warriors have shown so far in the playoffs deems them worthy of true title contention, but they displayed something essential to the championship formula in a closeout game on Friday night: adaptability. The more cards a coach has to play -- whether it's Kerr or Brown -- the more likely they are to have an answer for whatever problems they encounter. And needless to say, either the Phoenix Suns or Dallas Mavericks will present massive problems.

The planning will come later, however. Thompson and Curry said they'd watch Sunday's Game 7 between the Suns and Mavericks, both as fans of the NBA and to get a feel for their next opponent. In the meantime, they'll celebrate a Western Conference finals berth that was once a ritual with a renewed sense of appreciation.

"It's unbelievable, knowing what we've been through these last two years -- six out of the last eight we have an opportunity to play for the Finals," Curry said on Friday night. "It's a pretty cool vibe when you figure it out as a group, because we haven't done it with this group together. Definitely special, never take it for granted. Understand, this is what it's all about."