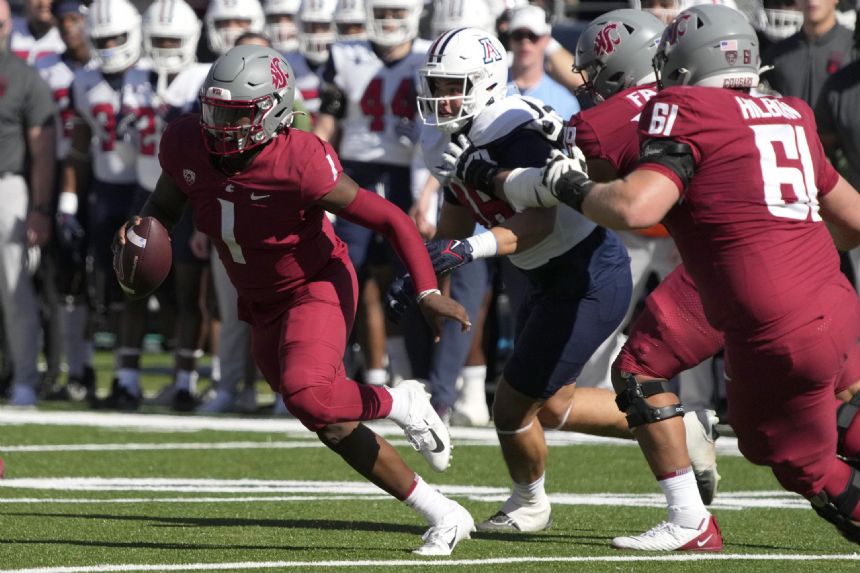 Watson scored on a 4-yard pass from Cameron Ward in the first quarter and on a 2-yard run in the second, giving him six scores in the past three games. He finished with 86 all-purpose yards for the Cougars (7-4, 4-4 Pac-12).

De Laura, who transferred from WSU in January, was 28 of 46 for 357 yards with a rushing and passing TD. He was the 2021 Pac-12 Offensive Freshman of the Year with the Cougars and threw four TD passes against Arizona (4-7, 2-6) last November.

Ward was 25 of 36 for 193 yards and a TD and ran for a season-high 59 yards including a 17-yard TD. He entered the game with eight rushing yards all season.

WSU led 21-6 at the half and extended that lead by picking off de Laura on three consecutive possessions. Sam Lockett III returned an interception to the Arizona 19, setting up Dean Janikowski's 23-yard field goal with 4:45 left in the third quarter, and Derrick Langford Jr. picked off de Laura and returned it 35 yards for the TD and a 31-6 lead 36 seconds later.

Lockett got his second pick with 1:13 left in the third, diving for an overthrow at the WSU 4.

The Cougars went up 7-0 less than four minutes into the game on Watson's TD catch, then made it 14-0 midway through the second quarter on a 17-yard Ward keeper. After Arizona cut the deficit to 18 on a 38-yard Tyler Loop field goal, WSU made it 21-3 on a 2-yard Watson TD run.

The Wildcats made it a two-score game at the break with a 47-yard Loop field goal.

Washington State: Running backs coach Mark Atuaia wore Virginia gear on the sidelines to honor the victims of the tragic shooting involving that killed three Cavaliers players and injured another last Sunday. Atuaia, who coached at Virginia from 2016-21, was one of 10 coaches across college football on Saturday honoring their former team.

Arizona: The Wildcats failed to gain bowl eligibility for the fifth consecutive season, their longest stretch without a bowl appearance since missing nine years in a row from 1999-2007.

Washington State: Hosts rival Washington in the Apple Cup next Saturday. Cougars trying to win consecutive games against the Huskies for the first time since 2007-08.

Arizona: Stays home to take on rival Arizona State in the Territorial Cup on Friday. Wildcats have lost six consecutive against the Sun Devils.