West Ham rallies for 1-1 draw against Tottenham in EPL 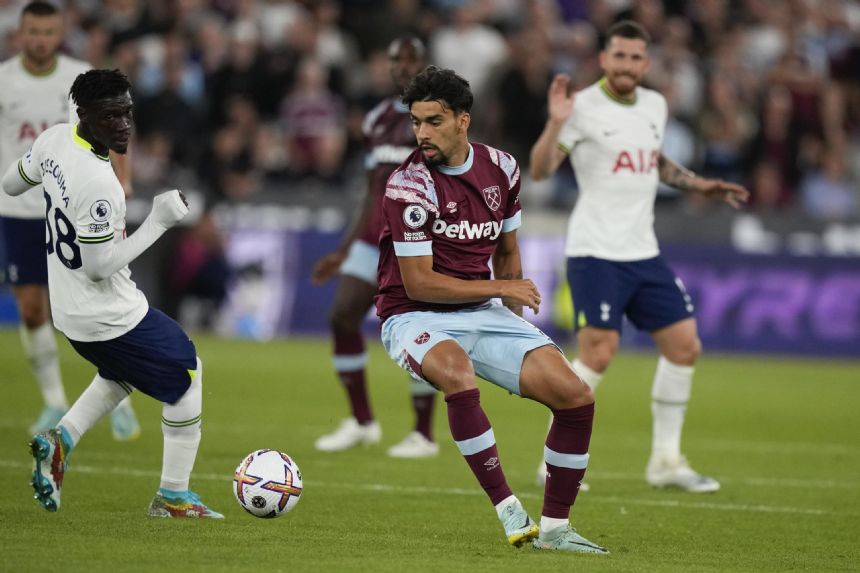 LONDON (AP) - Club-record signing Lucas Paqueta had a chance to score a late winner for West Ham but in the end it had to be content with a 1-1 draw against London rival Tottenham on Wednesday and its first home point of the season.

Hammers coach David Moyes claimed before kickoff that Paqueta had not so much as passed a ball to his new teammates after only completing his 52 million pound ($61.6 million) switch from Lyon on Monday.

And it showed when, with four minutes remaining, Vladimir Coufal pulled the ball back, only for Paqueta and fellow new signing Emerson Palmieri to leave the ball to each other, 10 yards from goal, instead of taking a shot.

Moyes fell to his knees on the touchline after the Brazil international passed up the chance to make an instant impact.

A point was hardly a bad result, though, after an own goal from Thilo Kehrer had given unbeaten Tottenham the initiative. Tomas Soucek leveled for the home side.

Spurs were awarded a spot kick after 11 minutes when Harry Kane headed Ivan Perisic's cross against the outstretched arm of Aaron Cresswell.

But after a four-and-a-half minute VAR review, referee Peter Bankes eventually went to the monitor which showed the ball had hit Cresswell's face before his arm, and the decision was overturned.

But Tottenham grabbed the lead with a classic counter-attack that ended with a cross from Kane that was meant for Son Heung-min, but Kehrer got there first and diverted the ball into his own net.

The Germany defender has made an inauspicious start to his Hammers career having also given away a penalty on his debut against Brighton two weeks ago.

West Ham equalized after 55 minutes when Michail Antonio collected a quick throw-in and manufactured a clever flick into the path of Soucek, who took a touch before leathering the ball past Hugo Lloris from six yards.

Jarrod Bowen stabbed a good chance wide before, in the 67th minute, Paqueta was sent on for Benrahma.

Pablo Fornals should have put West Ham ahead shortly after from Bowen's pull-back but he blazed over.

Then came Paqueta and Emerson's mix-up in front of goal before Bowen fizzed the ball across goal but Antonio was unable to apply the finish.