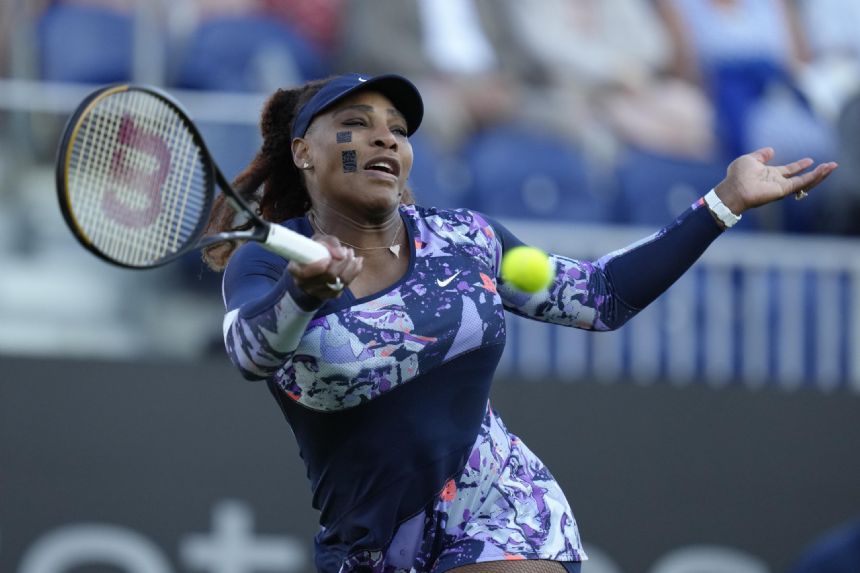 EASTBOURNE, England (AP) - Serena Williams might yet win a title in her first comeback event.

The American star moved into the semifinals of the women's doubles at Eastbourne by partnering Ons Jabeur to a 6-2, 6-4 win over Shuko Aoyama and Chan Hao-ching on Wednesday.

And, ahead of playing in the singles at Wimbledon next week, there were signs that the 40-year-old Williams is regaining some sharpness after nearly a year out.

Like the back-to-back pick-up shots off her toes early in the first set. Like the three straight aces on break points in the second game of the second set.

Indeed, Williams' serve - the biggest the women's game has ever seen - was increasingly impressive when under the pump, and it was the 23-time Grand Slam singles champion who served out the match.

On the five break points she faced, she sent down four aces and one unreturnable serve.

So, her competitive preparation for Wimbledon will take in at least one more match. In the semifinals, Williams and Jabeur will face Magda Linette and Aleksandra Krunic, who dispatched the second-seeded pair of Gabriela Dabrowski and Giuliana Olmos 6-1, 6-3.

In the women's singles, Beatriz Haddad Maia stayed on course for a third grass-court title in three weeks by ending the hopes of British wild card Jodie Burrage 6-1, 6-2 in the second round. The Brazilian player is coming off winning the Nottingham Open and the Birmingham Classic.

Jelena Ostapenko continued the defense of her title by also advancing to the quarterfinals after her opponent, Madison Keys, retired having lost the first set 6-3. Other players into the last eight were two-time Wimbledon champion Petra Kvitova and Camila Giorgi.

Fourth-seeded Diego Schwartzman was another big name to fall after a 7-5, 7-6 (3) loss to Jack Draper, a big-serving Briton.