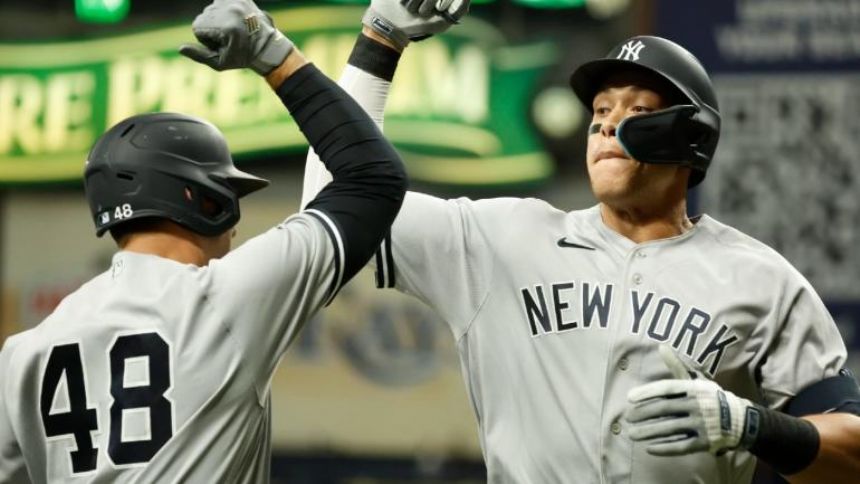 New York Yankees outfielder Aaron Judge recorded his sixth multi-homer game of the season on Wednesday night against the Tampa Bay Rays (GameTracker), making him the only player in franchise history other than Babe Ruth to record six such games within the team's first 70 contests, according to ESPN Stats & Info.

Judge entered the night with a majors-leading 25 home runs, putting him four up on second-place Mike Trout and five ahead of Pete Alonso, the National League's leading slugger. Clearly he wasn't content with those margins, as he launched No. 26 in the fourth inning against Rays starter Shane Baz:

Aaron Judge SMOKES his 26th home run of the season!

And then put No. 27 on the board in the seventh versus Rays reliever Colin Poche:

Your eyes do not deceive you, Judge cleared the Tropicana Field catwalk:

he CLEARED the catwalk ?? pic.twitter.com/HnlZ0eBr9G

According to Statcast, Judge's first home run had a 99.9 mph exit velocity and carried 396 feet. His second, meanwhile, had a 109 mph exit velocity and traveled 406 feet. For those wondering, his hardest-hit home run this season was a 115.5 mph blast against the Chicago Cubs on June 11; his farthest-hit home run, conversely, was a 456-footer against the Chicago White Sox on May 12.

Wednesday marked Judge's 22nd career multi-homer game, pulling him even with Jason Giambi for the sixth-most in Yankees franchise history:

Judge, an impending free agent, entered Wednesday's contest hitting .300/.378/.644 (190 OPS+) in his first 66 games this season. His contributions have already been worth an estimated 3.4 Wins Above Replacement, according to Baseball Reference's calculations.'

Judge's next big moment this week could come on Friday. That's when he and the Yankees are scheduled to have the arbitration hearing that will dictate his compensation. For more about that, you can click here to read our primer.