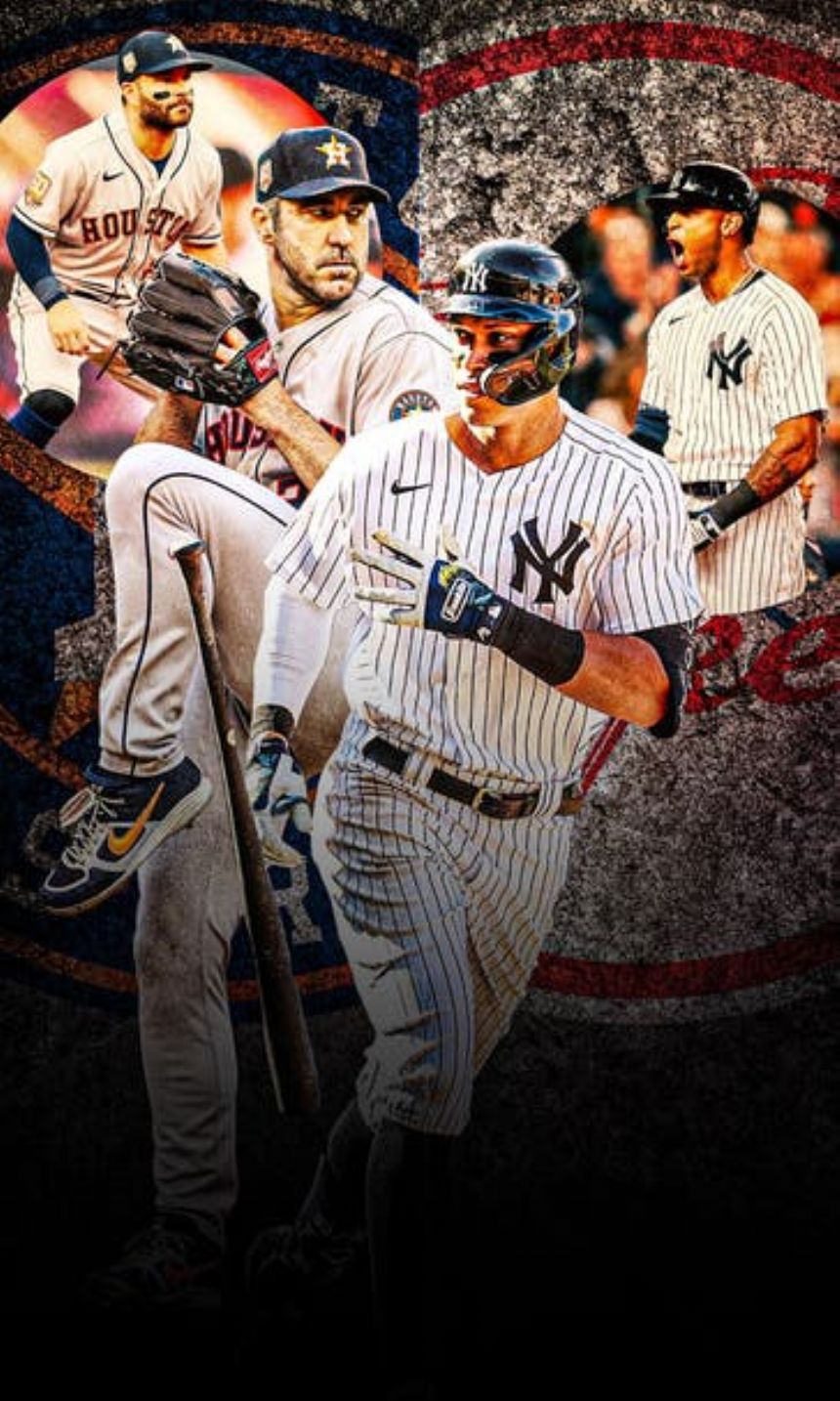 Aaron Judge lifted a two-out, three-run walk-off laser beam to beat the Astros on Sunday afternoon in the Bronx, and the New Yankee Stadium rattled and roared with a ferocity typically reserved for the colder months of postseason baseball.'

Aaron Judge's walk-off, three-run homer in the 10th inning Sunday gave the Yankees a split of the four-game series.

This was not a typical regular season series. This roller-coaster four-game set between New York and Houston was a battle, a precursor, a dress rehearsal and most importantly, a damn good show.

As electric as regular season baseball could possibly be.

Granted, the circumstances were particularly special; the two best teams in the American League, each on a hot streak, with a recent history of distaste between the two fan bases, squaring off for a four-game set over a weekend? Oh, baby. Yes please.'

Ben Verlander explains why the Astros are still the team to beat, and the four-game series in the Bronx was a potential playoff preview.

The Yanks took the opener on Thursday evening after trailing for most of the game when Aaron Hicks smashed an incredibly satisfying, game-tying three-run blast in the ninth before Judge walked it off with a liner down the line later in the inning.

Houston responded the next night behind a trademark performance from the ageless Justin Verlander, who twirled seven masterful innings, allowing just a single run on four hits. A three-run Kyle Tucker smash in the sixth was enough for Houston, which held on for a huge bounce-back win.

Saturday afternoon's affair, even though it was a combined no-hitter from the Astros, was probably the least tense and entertaining game of the four. Christian Javier was untouchable for seven innings, Hector Neris survived by the skin of his teeth in the eighth and Ryan Pressly finished off the historic achievement with an easy save.

Sunday was the cherry on top of the good baseball sundae as the Yanks pushed across three runs in the latter half of the ballgame, tying it up in the eighth on a DJ LeMahieu two-run shot. Things went to extras and once Houston failed to bring around the zombie in the top of the 10th, the outcome of the contest felt somewhat inevitable. With runners on the corners and two outs, Aaron Judge did what Aaron Judge does and the Yankees won the ballgame.

Ben Verlander provides his MLB Power Rankings after Week 12 of the season, with the Yankees, Padres and Mets leading the list.

The House that Haphazardly Replaced the House that Ruth Built was a thunderdome all weekend long, a cauldron of noise and obscenities packed to the brim, postseason style. With "F--- Altuve" hats and trash-can-related graphic T-shirts aplenty, Yanks fans created an atmosphere rarely seen during regular-season games, an atmosphere that some Yankee players themselves admitted they'd never truly experienced before.

Before he was traded to New York during Spring Training, Yankees shortstop Isiah Kiner-Falefa spent the first four seasons of his big-league career in Texas. In three of those four seasons, the Rangers finished last in the AL West. Before that, he was in the minor leagues for half a decade. The last high-stakes, high-energy baseball game Kiner-Falefa played was likely the 2013 Hawaii State Championship game in which his Mid-Pacific Institute Owls defeated the Mililani High School Trojans.

So yeah, it has been a minute.

"As a team, I feel like the energy of the crowd really gets us going," Kiner-Falefa told AP Sports before Friday's game. "I think the fans really give us life. And me personally, I love it, especially coming from a 100-loss team. Sometimes, it's a lot, but it's what you dream of as a kid. It's the best. Who wouldn't be happy with this?"

Cristian Javier threw seven no-hit innings and struck out 13 on Saturday, as the Yankees failed to get a hit for the first time since 2003.

Joey Gallo, who played with Kiner-Falefa in Texas before getting traded to the Yankees before the 2021 trade deadline, agreed that the energy at Yankee Stadium for the games against Houston stood out as particularly raucous.'

On more than one occasion this season, the scuffling Gallo has been the recipient of that intensity himself, with the Yankee faithful booing him off the field after a strikeout. Nonetheless, Gallo appeared appreciative of the atmosphere Yanks fans helped create at the yard during the Houston series.

"It's f------ aggressive out there. You definitely feel that adrenaline in the stadium. It was pretty f------ rowdy. Especially in the outfield. But yeah, it's exciting. It felt like a playoff game," he said.

Even with the energy at the park turned up to 10, members of the Yankees coaching staff revealed they approached this series like any other from a process and game-planning perspective.

"I feel like we're trying to just play the series as it is and try to win each game with the options we have available." Yankees pitching coach Matt Blake told AP Sports.

But even though Yankees weren't going to empty the bullpen or press the panic button in a late June showdown, Blake said the coaching staff would pore over the information gleaned from the series against Houston more than they might after a typical series.

"All of this informs us going forward of what may apply in the postseason, right? There's not things that we would necessarily like, hide here. I think it's more: let's see what works and what doesn't now, and then we can iterate as we go forward."

Blake and Co. will have another chance to compile data on Houston as the Yankees travel to Minute Maid Park for a single game Thursday before returning for a doubleheader in late July. It's a bizarre way to play a three-game set, caused by the schedule changes forced by the lockout. It's a weird feature of the 2022 schedule that will certainly make the showdown in Houston feel less like a typical series.

But October comes quicker than you realize, and while the Blue Jays, Red Sox, Rays and whoever emerges from the lackluster AL Central might knock off one of the heavyweights, it feels increasingly likely that the road to World Series glory will run through both New York and Houston.'

And if this weekend was any indication, that potential ALCS would be baseball theater of the highest order.