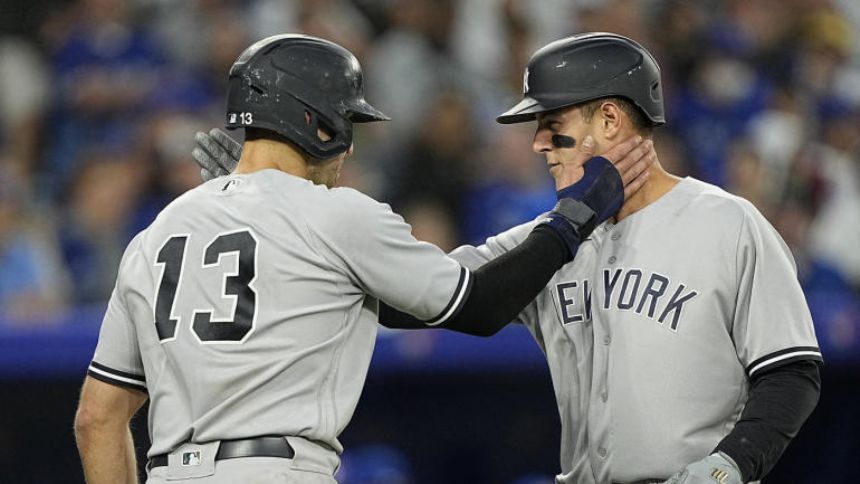 This week actually presented an opportunity for the other AL East contenders to take a chunk out of the Yankees' lead. Of course, with all the head-to-head action, the Yankees could also distance themselves from the pack even further.'

Four games in and it's been the latter. The Yankees completed a three-game sweep of the Rays on Thursday and have now taken the first of a three-game set in Toronto.'

In this one, the Blue Jays took an early lead, the Yankees got two in the fourth inning to grab their first lead, but then their power took over and they turned it into a blowout.'

The fifth inning started with Anthony Rizzo being hit by a pitch before Giancarlo Stanton and D.J. LeMahieu hit back-to-back homers:'

Doubles from Gleyber Torres and Joey Gallo pushed the lead to 6-1. A few batters later, Rizzo came to the plate again and put this one to bed.'

.@ARizzo44 caps an 8-run inning with a slam! pic.twitter.com/J08a8DSsXc

Yes, that's a grand slam to cap an eight-run inning, giving the Yankees a 10-1 lead. They were trailing not too long before. Rizzo now has 17 homers and 47 RBI. His career highs are 32 and 109, respectively.'

Here are the top four in the AL East standings.'

The funny thing is, we left off the Orioles due to them not being a contender, but they are closer to second place (nine games behind the Blue Jays) than second-place Toronto is to first-place New York.'

The Blue Jays have two more chances in the series on Saturday and Sunday, but even if they win both, that would still be a nine-game deficit as we move toward the end of June. And it's entirely possible the Yankees keep winning, too.'