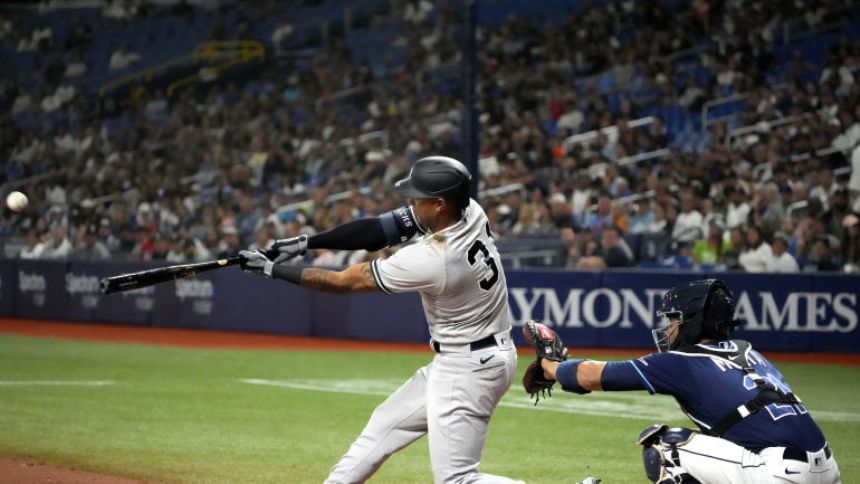 The Yankees lost on Sunday, breaking a nine-game winning streak. Monday, they got right back in the W column, taking down the Rays, 4-2, in St. Petersburg, Florida.

The game was almost a history-maker on an individual performance basis. Yankees starter Gerrit Cole had a no-hitter going through seven innings. He was dominant throughout, striking out 12 in his 7 1/3 innings of work. He was charged with one run allowed, as the runner he left on base came around to score.'

Offensively, the Yankees got a home run in the first inning from Anthony Rizzo and then in the seventh, Gleyber Torres would score on an error after doubling and stealing third. The Rays ended up tying the game in the bottom of the eighth. After Cole left with a runner on, Clay Holmes gave up a double before a grounder scored one and an infield hit -- a dribbler in no-man's land -- tied the game.'

The Yankees would respond in the ninth against dominant Rays reliever Jason Adam, though. Josh Donaldson singled with one out and then Aaron Hicks came through with a booming triple:'

Hicks in the nick of time ?? pic.twitter.com/JLSV5NFsvX

We should note there that Rays right fielder Manuel Margot was carted off the field with a leg injury after that play.'

Hicks would then score on a sac fly from Jose Trevino for an insurance run. Wandy Peralta secured the victory in the ninth.'

The Yankees have now won 17 of their last 19. They are 16-2 with a +66 run differential in June. This stretch was supposed to be the the chance for the second- and third-place teams in the AL East to make things a bit closer, but instead the Yankees have gone 6-1 against Rays and Blue Jays in the last seven days. As such, they now have a vast lead in the AL East, leaving the other three contending teams to jockey for wild-card positions, at least for the time being.'

Yep, they have been that good. This is the second-best start for any team since World War II and tied for the seventh-best in history. It's exactly the same record the 1998 Yankees had at this point in the season, and that's generally regarded as one of their best championship teams ever. Remember, that team won 114 games and then went 11-2 in the playoffs, never facing elimination.'

The Yankees continue their tough stretch in the schedule the rest of the week, playing two more against'Tampa Bay before hosting the Astros for a four-game series starting on Thursday. Not that it has mattered to this point, as the Yankees are now 21-8 against teams .500 or better.'